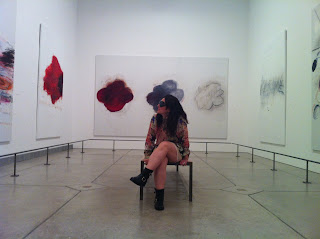 When I think about it, my obsession with underwear began when I was a little girl. I can clearly remember getting ready for bed each night and my mother would call out the check list from the next room….
Did you brush your teeth?
Did you wash your face?
Did you put on pajamas?
Did you change your panties?

She most definitely called them panties. Now the word seems either very fashionable or very naughty. Back then, it implied a pair of white cotton underwear with the correct day of the week printed across them.

I loved my “day of the week” underpants. You know the ones with a Monday or a Wednesday plastered across the backside. There was something we could rely on. The world made sense when on Tuesday you were wearing Tuesday panties. Under no circumstances did you mismatch days. Hell would freeze over before Friday touched your ass on a Monday morning.

We had control over the world with just a pair of a “day of the week” underwear.

As for the nightly changing of the panties… this was a ritual that has survived with me years later. In fact, my girlfriends, I am quite certain we all have the stories about how our mothers made us change our undergarments.

What is it about Mothers and underwear? Is this yet another generational education of the feminine mystique? Make no mistake, I do think my mother is a source of a wealth of information. I would never openly admit this to her and if she is reading this…. I will deny it in a follow up conversation. That being said, Mommy dearest had a thing about clean underwear at bedtime.

She argued that cotton underpants were the key to not getting a bladder infection. In fact at the time, the science did back her up. An article published in the Journal of Pediatrics in 1978 cited that “tight fitting undergarments made of synthetic material” increase the risk of urinary tract infections in children.

Unfortunately the article has no evidence or studies to back it up and thus I can safely say that Mama was in fact severely mislead. But with age comes wisdom and I would like to think that 30 years later, we are smarter about our bodies and the fabrics we place upon them.

Three decades of panties and briefs and thongs should be enough time along with a substantial generation of women to “shake the bacterial myths” from any tree of knowledge?

The generation before me spent a decade burning their bras. The generation of women after me has spent countless time showing said bras to the world. Shouldn’t there be a bit of evidence behind my mother’s urban underwear myth?

I ponder these life altering questions as I am now too near to 40 and still stuck in cotton briefs. Make no mistake, I call them “boy shorts” now so as to be cool. But really, the are just a small styling choice away from being “granny Panties”.

I have tried thongs. Hell I even spent $25 at Holt’s last week in the name of research on a pair of lacy “Hanky Pankies”. They have been recommended to me as the most “comfortable thong in the world”. I rushed home. I washed and laid them out to dry. The next day, I put on said lacy devils and realized that yes they may be the most comfortable thongs I’ll ever wear… however, I HATE thongs. Can’t handle the whole up the but thing. Never will. And if an expensive and trendy piece of clothing won’t cure my dislike for all things thong…. Nothing will.

It’s my dear Mama and her pantie rantings. I can not shake the need for cotton briefs. It’s as ingrained in my psyche as brushing my teeth before bed. I was hiking in the Andes mountains last winter and still found the water source to brush up before crawling into a tent for the night.

An 2003 study published in the European Journal of Obstetrics and Gynecology looked t risk factors for vaginal yeast infections in over 1100 Italian women from eight different hospital or university gynecology clinics throughout Italy. Of 1138 patients recruited in the study, 931 were evaluable. A recent history of vaginal yeast infection was documented in 43.5% patients (358/823) with a mean number of 2.9±2.7 episodes per patient (N=302). A total of 77 patients (10.0%) had a history of recurrent infections defined as four and more episodes in a 12-month period. Of these 77 women more than 1/3 were related to life style. Such risk factors as synthetic fabric underwear, vaginal douching and bike, training bike and motorbike use were cited. The numbers were too small howvere to calculate any actual risk.

So the evidence continues to be controversial at best. I really did want to like the lace underwear, my dear cybersisters…. Science be damned. There was no evidence to the contrary.

Do I feel better wearing cotton underwear? No. Not at all. For I wear said natural fibres while riding my bike to work and back each day. According to the Italians… I just can’t win. Perhaps this is why a generation of women burned their bras in the first place.
Posted by Girlfriend's Guide to Health at 4:30 AM