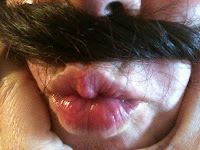 That being said…. It’s been a long month of hairy faces. I, for one am grateful when December closes the door on MOVEMBER for yet another year. Boys, grab your shaving kits and get clipping. You had best be whisker free by dawn.
Posted by Girlfriend's Guide to Health at 2:00 AM