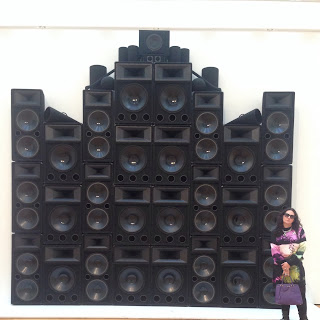 Tis the seasons my sisters and nothing says Winter holidays like minus 40 degree Celsius. Yes, as I write this, I am in the coldest place on earth. I am working for the weekend in Fort McMurray, Alberta.

Fort Mac, as it is affectionately called is an interesting part of the world. A sweet little town born of the oil sands and mostly made up of young families a men from everywhere else in Canada who have come here for work.

I imagine that this is a bit of a modern day version of Gold Rush towns. If you are in need of a visual frame of reference, think HBO’s Deadwood meets The Wire. Yes, my sisters, I’ve been spending some time watching “boxed set” series…. A Zentner holiday tradition.

I should say that indeed, I thought I was brave to the cold. Afterall, I was a little girl on the prairies. Having been born and raised in Winnipeg, I was indeed the girl who walked to school in 4 feet of snow.

Prairie kids are tough as shit; made of  steel and the salt that rusts it. We are proud of the ice water that runs in our veins and eager to claim a new member to our tribe. We are born of mothers who send us out to play in unzipped parkas in minus 40 (minus 80 with the windchill) and tell us to come inside only when we REALLY can’t feel our faces. We grew up knowing that we came of strong, proud stuff. We shared the same hallowed snow banks as Joni Mitchell and Neil Young.

I continue to take pride in my prairie girl status. Somehow I knew it grounded me to the plains that “raised me good”. No matter where I would call home someday, I was a prairie girl and that was as solid as the ground beneath my feet.

So imagine my surprise when I stood outside the Air Canada airbus 8566 on the tarmac in Fort Mcmurray on Friday with the wind teaching me who was really in charge.

Was I dressed appropriately? Hell, yes. Did it matter? Fuck no. If you must know, I had on winter boots. Yes, gone were the heels. I was in those big unflattering winter monstrosities (fine… they were Prada, if you must know- I have not lost all civility) and a wool double layer winter coat. I had a hat, two scarves and a decent set of gloves. This was purely for show as nothing could have saved me.

Never mind that I had played in this weather for many a formative years. My years spent in the snow of the 1970’s and 1980’s was immaterial. For there, on that tarmac in Northern Alberta, I realized in an instant what I had become. Eight years on the west coast had undone years of prairie training…. I had grown soft. I had lost my edge. And as I waited for my Sky-check baggage to arrive (damn you Air Canada)- the minutes seemed like hours. My prairie girl pride slipped from my freezing gloved fingers as one thought ran through my brain…

“They should pay people for populating this area”.

Make no mistake. I love the north. The Northern lights are something one must see at least once in a lifetime. I love the uncomplicated kindness that one is afforded in any town across this great nation that does not take itself too seriously. Fort Mac is such a place. People often turn their noses up at the rural communities in this country.

They praise the likes of Toronto, Montreal and Vancouver. They feel sorry for Saskatchewan and the misunderstand the Maritimes entirely.

But if you look closely in the smallest places of this great nation you will find the wonderment that really does make this land a magical place.

Make no mistake- I did not find wonder in my first moments on the first day of winter at the 60 parallel. I received my rental car with a smile and an extension cord and instructions to “plug it in all the time, or it won’t start”.

And so my weekend adventure began. I split my time between the hospital and the hotel, grateful for “auto-start” and underground parking; a woman who does not own a car now spending hours worrying if this one would start.

After two days in a deep freeze, I have taken to running on the hotel treadmill and wearing leggings, cashmere sweaters and winter boots… everywhere. I was not taking off these boots for love or money. I was freezing and my prairie girl core was buried under a glacier. She was not coming out till the thaw. The mighty had fallen. I I missed my bike and my “fit bit” (more on this in a future post) was calling me names for being such a lazy shit.

Three days in minus 40 had reduced me to the human equivalent of a hibernating grizzly. I could not help but wonder what this kind of weather does to anyone calling places like this a permanent home.

Was there an adaptive process to this freezing pain or does it indeed get the best of us all?

According to the Canadian Death Survey from Stats Canada, (2006) there is indeed an increase in death rates in winter months in this country. An average of 656 Canadians died daily in January compared with 546 daily in August. What’s even more interesting is that this phenomenon also applies to the USA, Australia and New Zealand. Does temperature have something to do with it? Sure enough… it’s only a small factor. 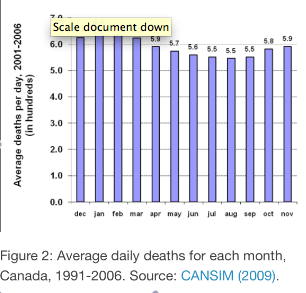 One theory is that winter months do indeed place an extra stress on body physiology. The theory is that the cold adds added physiological factor on a body’s usual functioning. Other factors to consider are what tend to do in winter months. Many of us are far more sedentary and we then only get active when we need to shovel snow. We fall more in winter and break things and well… you get the picture.

But some of this does not explain the fact that this phenomenon is even present in warmer states and countries. Sure this might be the case for Northern Alberta, but Florida? What about Florida?

Yes, my sisters- I could ponder this all day long. Perhaps subtle temperature changes are indeed the issue, perhaps it’s a post Christmas hangover… perhaps January is just a good month to die. Sometimes a pattern is just a pattern… sometimes it mean so much more.

All I know is that I spent the weekend in the ice age and lived to tell about it. My hard-hearted prairie girl is a bit of a wimp and I hate driving cars- especially ones that need to be plugged in.

Sure, I learned that the freezing cold on the tarmac in Fort Mac won’t indeed be the death of me any more than my winters spent playing in a prairie winter with my parka undone.

But on Tuesday as you read this- think of me back in Vanlover running the seawall in the rain, blissful once more on a winter day that I can indeed handle.

I am weak my sisters but I am all yours. Merry and Happy sweet girlfriends of mine…. Bundle up, wherever you are… it’s cold out there.
Posted by Girlfriend's Guide to Health at 10:56 AM