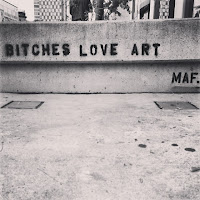 (I stole this Photo from Mike Bickerton - he's a creative genius)

It has come to my attention sweet sisters of mercy that the war on gluten is upon us. It started off slow, insidious almost. First there was a shelf at the supermarket, then a small area in the frozen food section. Slowly but surely gluten free items were popping up all around the world.

A recent poll of Americans shows that 30% are afraid of gluten. Seventy percent are afraid of public speaking and 60% are afraid of death. This of course brings a whole new thought to the bagels and shmear served at funerals these days.

Let's be clear... I'm not a hater. I love gluten; and by gluten I mean bread, pasta, all of it. Anytime you take a wheat kernel and turn it into something magical, I'm a fan.

I must admit that when this whole "Gluten sensitivity" experience descended upon us, I was indeed a skeptic. How could something that had literally been a part of civilizations "daily bread" be Satan? Was it not just a fad? Gwenyth (Paltrow) went gluten free so should the masses follow? To be clear, girlfriend names her kid Apple.... her judgement is questionable.

But could 30% of American be wrong? Sure they had some lapse in judgements in the past (George Bush?) but when 1/3 of a nation cites a food sensitivity I stand up and take notice.

And so like any good cybersister.... I went searching for the science behind our culture's fear of all things pizza dough.

Gluten, my sisters is indeed Latin for "glue". It is composed of two proteins Glutenin and Gliadin and when you combine these two proteins together and with water you get something truly magical. I should say, I'm a woman who loves to make bread. I love the tactile experience of kneading the bread and watching it become smoother and springier in my hands. This very act is indeed gluten in action. Mix flour and yeast with sugar and water and sure enough you activate the proteins in the granules- Gliadin and Glutenin which come together to form gluten. The yeast ferments to form carbon dioxide which aerates the dough. The dough rises and when you bake it these bubbles expand even further and stiffen. When the bread is fully baked, the bubbles stiffen and the starch solidifies. Gluten keeps these bubbles intact as air pockets in the dough. Without it they would flatten and just dissipate (insert sad face here).

As beautiful as gluten is- it has an ugly side. On the extreme side there is celiac disease. This is a disorder that has a significant genetic predisposition. Celiac is an autoimmune disorder where the immune system of the small intestine reacts to gluten. As a results the immune system indeed attacks the small intestine causing erosion of the lining over time. Symptoms of celiac include abdominal bloating, pain, diarrhea. Other systems can also be involved in celiac. Patients can experience skin rashes and irritations and even neurological involvement.

Patients with celiac indeed have autoantibodies towards gluten that can be measured. They also have genetic markers of celiac. These can be measured by one or more blood tests.

Howvere, only 1% of the population in North America suffers from celiac.

So what's with all the gluten sensitivity? Well here's where the lines indeed blur. The scientific literature has well documented cases of patitents with gluten sensitivity. These are patients who lack the autoimmune component of celiac but who have significant symptoms ranging from malabsoprtion to abdominal pain to memory dysfuction when eating gluten. In other words- there really is no blood test for these patients. They do however report a wide variety of symptoms that respond when gluten is taken out of their diets.

I'm not disputing the existence of gluten sensitivity.

What about gluten free for weight loss? This one is a tough one, my sisters. Studies actually show that patients who are diagnosed with celiac often gain weight after switching to gluten free diets.

A study published in 2012 looked at weight gain in 1018 patients with documented celiac. The study showed that 30% of the patients were overweight or obese (less than nonceliac patietns). After switching to a gluten free diet patients gained a significant amount of weight (4kg on average). This is thought to be due to the fact that celiac patients on gluten suffer from malabsorption and after switching to a gluten free diet, their gut heals and absorption improves.

In real life people who do not have a gluten sensitivity who go off gluten have variations in their weight. This depends not so much on whether they give up gluten products but indeed what they replace them with. If you give up cookies for gluten free cookies- we have a problem If you give up gluten for vegetables and fruit.... bingo. Weight loss.

Sweet sisters... clearly this topic is a complex one. I suspect there be many a post in the future about this bread of affliction.

TO some it up as any good sister should?

Steering clear of gluten won't kill anyone. It;'s actually not that difficult. meat, fish, chicken and seafood are all gluten free. Vegetable and fruits are all gluten free as are milk, cream anything you can make from them (cheese glorious cheese).

Benign grains such as quinoa and corn and rice are gluten free. Chickpeas, amaranth and soy are all gluten free. Hell, check the Internet my sisters.... the web is full of all rules gluten.

Are you indeed gluten sensitive? Yes? No? Maybe so. Celiac is real and then there is this medical grey area called gluten sensitivity that I would argue the medical community will take years to figure out..... in the meantime my sisters? Eat bread or abstain. Take your pick and pick your side. Should you come to my house you may not want to partake in my home made bread or award winning pies.... but I promise to win you over with my stunning conversation and impeccable table manners.


Posted by Girlfriend's Guide to Health at 9:30 PM