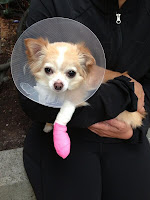 I’ve been thinking a lot about that which matters to us; the people in our lives, our relationships, our perfect winter footwear. Not to worries, my sisters- I won’t get too philosophical, but lately, I’ve been wondering about the series of connections we have to the world and how as humans (and girlfriends) we really are the sum of our parts.

This leads me of course to the realization, I fear, that I become one of THOSE PEOPLE.

Many years ago, when I first started practice I had a patient who cancelled her appointment because her dog died. I remember thinking at the time, “come on, it a dog.”

And then I got a dog.

Back then I could not have imagined the loss of a dog and how it might affect someone. Those of you reading this who have never had a furry creature lick your face in the morning are surely thinking that I have indeed lost both my credibility and my perspective by just letting you in on this little secret.

But yes, almost 10 years ago I let a dog into my life and it has pretty much screwed up my sense of things. Nine years ago, I let another puppy into my life and safe to say- the bottom has fallen out of the proverbial barrel.

Make no mistake- I’m not one of those owners who dresses up her dogs in fancy clothes (no judgment). I don’t paint their toenails and I don’t call them my babies. I realize they are indeed dogs.

I leave them at home alone for periods of time and yes, there has been an occasion where I forgot to feed them.

I do, however ensure that they have a lovely “dog nanny” who takes care of them when I am out of town. I often buy them a special dog treat for no reason. I make sure that they are walked, fed and watered twice daily. I let them like my face with reckless abandonment and I do rub their tummies when called for.

In short- I am not a bad owner. I’m actually a loving dog owner with a reasonable sense of canine responsibilities.

I know that one day, my Lola and Ruby will die. Lola is 10, Ruby is nine. If my math skills are correct and Wikipedia knows its shit, I have another 5 or so good years with these fluffy monsters.

I’m somewhat sensible about this. I have even thought about what would happen should my pups need more intense medical attention than the usual vaccinations and check ups they have had in the past.

In my head I played the usual “what if” game. Would I give them insulin if they were diabetic? A simple pill every day for a chronic treatable disease?  If for example, Lola was diagnosed with Rheumatoid Arthritis would I manage her care like I would a human, or, (hypothetically of course) would I call it quits and start over with a new, Tibetan spaniel called Flossie?

In my head, I was clear on a few things and fuzzy (no pun intended) on most others. I vowed that there was no way in hell my dog was getting chemo. Should either of my fuzzy monsters get cancer- I’d be sad and it would be hard but I draw the line at chemo.

And then Ruby got caught in an escalator.

Yes, that is correct…. An escalator.

Sure she rides the escalator all the time without incident but on this day- there was an incident.

Let me not go through the details, only to say- think Beverly Hills Chihuahua meets The Saw and you have a rough idea of what went down at Chapters Bookstore on Robson last week.

Incidentally- I will be buying books online for the next few months until the staff there forgets who I am.

Safe to say, I remained calm and as for Ruby? She was indeed in shock. Because after the horror wore off, the dog was surprisingly calm as I held a Starbuck’s napkins around her paw and walked her the 6 blocks to the Vet’s office.

A moment of shout out to the staff at the Veterinarian’s office who were awesome. They took Ruby right away and cleaned her up and informed me that she would indeed need surgery on her paw to remove the broken finger.

I whipped out my Amex card like it was a Barneys shoe sale and sure enough…. 24 hours later- Ruby had her toe safely removed while under anaesthetic.

Ruby’s toe surgery cost me as much as a pair of Manolo Blahniks. Yes, I sound really shallow when I say that…. But somewhere, someone is thinking the same thing and its important for me to provide some sort of emotional weather vein to heartless among us.

According to a poll published in USA Today in 2011, 80% of pet owners took their animals to the vet annually. The cost on average was $500. One in six owners spent more than $1000 annually on vet bills for their animal.

And yes, I am ONE OF THOSE PEOPLE.

No, it isn’t bad and no I do not judge. Ruby is a really sweet dog and yes she enriches my life in ways that a pair of Manolos never could.

The dust has settled and Ruby is healing well. The trauma of the moment is but a memory and in the next few months I will return to Chapters (without my dog) to buy my books once more.

I have become a statistic, my sisters…. The lesson is clear. I think back to the time when I passed quick judgment on the patient who failed to show for her appointment only to completely understand her point of view once I had a dog of my own.

The lesson is clear my sisters… never judge a girlfriend until you’ve walked a mile in her Manolos. As for Miss Ruby, my 9 fingered dog? I still draw the line at chemo.

Posted by Girlfriend's Guide to Health at 9:15 AM