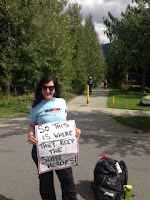 Many years ago, my university professor told me “Hope is a supernatural vice”. I must admit, at the time I was not exactly clear on his sentiment. After all I was 19 and the world was indeed my oyster. The future lay before me like a serious set of options and all I had was hope. Sure, I got the “supernatural” part of the statement, but indeed the possibility of HOPE being anything akin to a depravity or fault was truly lost on me. Nonetheless, the sentence has stayed in my brain for some time now.

This past weekend I was a volunteer for Ironman Canada. Having participated in so many races (yes, I have lost count), I decided the time had come to give back to a community that had been so good to me.

The racing community in general has given me so much over the years. Having come to fitness a bit later in life, it gave me the chance to compete on a different level. When people are athletes as kids- there is always an array of championships to choose from.

My dear friend was a football champ in college. No doubt there is a box somewhere in his parents basement filled with trophies and athletic awards. I don’t have such a box. I was a chubby kid who hated little league and a brainy teenager and twenty something who focused on grades. I took up smoking so I could be cool and ate licorice for Canada.

The details of my physical transformation and my later love of sport will not be detailed here. Take my word for it that I took up running in my mid 30’s and have never looked back.

Each race I completed was indeed memorialized by a medal or a t-shirt given to me by some perfect stranger with a volunteer shirt and a serious grin.

I would cross the finish line of something- whether it is a 10km run or a marathon; a sprint triathlon or a Half Iron Man and someone would inevitably tell me how amazing this was, what a good job it was and place a medal around my neck.

It is now fitting that somewhere in my storage closet there is indeed a box filled with medals and t-shirts of athletic pursuits gone by.

And so it seemed appropriate for me to spend some time in a volunteer t-shirt of my own with a smile on my face and a cheer in my heart. This weekend was just that time.

The Ironman is quite frankly the most challenging endurance race there is. A 3.8km swim is followed by a 180km bike ride and then for shits and giggles, you run a full marathon.

I should say it plain right here- I will never and I mean never attempt one of these. Ever a fan of challenging myself- this is indeed off the menu for me. That being said- I was happy to volunteer on the run course as one of those random people in a blue t-shirt who cheer for strangers and direct traffic.

I assumed this would be like any other volunteer position. I would go and do my part and indeed see if I might catch the Ironman “bug”. Could it be that as I stood on a race course or even at the finish line I might indeed grow a spark of that supernatural vice and myself attempt a race of this magnitude?

Instead I gained something more.

I must confess that there have been times in the past when I was less than kind to race volunteers. I was a little too curt with my questions or when the answers were not to my liking I was indeed downright rude.

This weekend I was on the other side of it all. People can indeed be less than kind to volunteers. Yes world, I understand that we all have things to do and places to go and that stopping traffic for 3 hours really does put a kink in a day.

But hey, dude in the BMW- I’m a volunteer. This race may not be a big deal to you but somebody’s dream is getting made to day. I can’t stop the whole race because you have a tennis lesson at 4pm that you are late for. If it is so important, get out of you car and walk to the damn thing. Is that not the whole point of tennis? Exercise?

This is of course a completely hypothetical situation (insert tongue in cheek here).

I spent 5 hours directing traffic and cheering on future Ironmen on the run course. In that time I indeed had a blast. But I will say that at least twice an hour some car drove by and gave me shit. Yes, I was told that I was doing a pretty crappy job. Yes, I was argued with on more than a few occasions.

Perhaps it was indeed karma for the times when I had been less, well a bit of an asshole, quite frankly to other race volunteers?

This ends here and now. Volunteers of any kind- be it at a race or in life really are undervalued. Make no mistake- volunteering at Ironman was amazing. You do need a massive amount of people to pull off an event like this one without an incident and indeed there is no way you can pay everyone.

And so to the gentleman who almost tried to plough me down with his Audi at 5:45 pm last Sunday in Whistler I responded in kind on behalf of all race volunteers everywhere who have been at the mercy of some rude person who has some place important to be.

“You suck at this.” He remarked when I greeted him at his window.
“Yes, I do”. I agreed, “but I’m a volunteer. I’m undervalued and underpaid. I know you have somewhere to be but you are going to have to wait a minute or two to let some runners pass before I can let you through.”
“Fine, but you are really shitty at your job.”

Dude was not letting up on the feedback.

And so I gave some feedback of my own….

“No, actually, I’m pretty great at my job. My DAY JOB that is. THIS is a volunteer position and if you are going to be rude and belligerent, you are going to have to pay me $20 to take your shit. I’m doing this just to help out dude- and that means that just because you have some place to be- it does not mean you can be an asshole to some random stranger. Maybe this attitude of yours works elsewhere in your life- but it won’t work here. Now, roll up your window and I’ll signal you when you can drive your car through the race course.”

Perhaps my attitude indeed needed some adjusting of its own. No it was not the classiest way to handle the situation and yes, in the grand scheme of conflict resolution it was an epic fail. But, hey, my sisters…. He had me at “you suck” and there was no going back from there.

And so I resumed my cheering. I yelled out peoples name listed on their bibs displayed across their chests. I jumped up and down and screamed and yelled and encouraged and indeed for each moment that a runner ran by I realized that I was truly connecting with the human spirit.

This is indeed what I learned on that race course in Whistler while 2500 crazy type-A people chased an insane dream to push themselves beyond human limitations and come out the other side.

People really do want to connect to the human condition. Whether it is to challenge ones own self and add to a medal box in a basement or whether it is to give back to random strangers and a community that needs repaying. Whether you yell at some angry dude in an expensive example of German engineering (make no mistake- the men and women in Hondas and Chevy’s were equal part assholes as well) or you yell at a guy name CHAD on the course who looks like he is dying and needs your love to get him through the next 23km. – we all want a moment to be seen and to be heard.

No data today- my sisters- just my own regular mark on the planet. Whether it’s a blog post or a volunteer job; a big time race or a small time little league game, we all want to have just a moment when we feel the world sees us for who we are.

Whether we are Ironman or regular people with golden opportunities- get out there my sisters- and make your mark. Do something today that does indeed challenge the planet in a better way and make no mistake you will indeed fill more than a box in your basement.

Peace and love, my sisters….. Zentner, out.

Posted by Girlfriend's Guide to Health at 7:11 AM