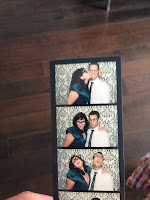 Love is in the air my sisters! Perhaps not in every household but hey, I’ve been to two weddings in a week and I must say, I’m feeling a little welly.

Indeed, I would argue that it has been the summer of legal unions. As a champion for marriage equality, I was thrilled with the Supreme Court’s decision to overturn Proposition 8. We saw the long awaited realization that everyone deserves the legal right to stand before his or her loved ones and join their life to another as a citizen with all the rights therein.

I must admit, it has been a while since I went to a wedding. Weddings are typically a standard event in one’s late twenties and early thirties. “Back in the day” I walked down my share of isles draped in a dress that really did not suit me- clothed in the fact that it was indeed NOT about me and, yup, I was okay with it. If fashion indeed is an expression of love, I would say that I wore more bridesmaids’ dresses in the name of love than in the name of fashion. No disrespect to my girlfriends who are reading this and reflecting if indeed such a statement applies directly to them. Heads up sisters- if I walked in your wedding- I LOVED the grey/black/cream/blue taffeta dress that I wore as one of your bridesmaids- and if I did not? Who cares- I love you more.

Lately, however, I realize that in my 40 somethings- my only frame of reference for all things bridal is watching SAY YES TO THE DRESS on a Friday night and sitting in judgement of some woman’s inability to commit to a garment she will wear for 5 hours during a ceremony where she will technically commit to someone else for a lifetime. Do I judge? Hell, yes…. Besides, it’s mindlessly good television.

So imagine the joy in my emotional IN BOX when this past week I attending, not one, but two lovely blessed weddings.

As far as weddings go- I indeed have some that I remember more than others. Of course, at the top of the list- was my own. That being said- it was 16 years ago and a complete blur. But if memory serves me well- there were 350 of my and Jason’s mothers’ closest friends. I was not what one would call a “hands on bride”. You see our wedding occurred 2 weeks after I graduated from medical school and frankly I let our mothers plan the whole thing. My attitude was simple, THEY (meaning our parents) COULD HAVE THE WEDDING, WE GOT THE MARRIAGE. 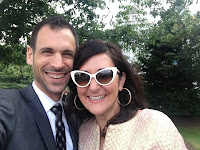 My beloved and I were married in a traditional Jewish ceremony. I circled him seven times under a canopy and yes, he did break a glass. During the reception where kosher chicken was served, we were hoisted on chairs while guests danced around us. We did it all- Fiddler on the Roof style and all I had to do was show up, wear a dress and bathe in the love.

It worked out quit perfectly.

Up there in my grand wedding memory countdown was my first same sex marriage. It was 4 years ago on Galliano Island and it was perfection. The grooms wore garlands of flowers and the ceremony took place on a cliff facing the Pacific Ocean. Cindy Lauper was the maid of honour – and yes, she sang at the ceremony. It was small and simple and a revelation in love. I remember feeling so proud to be Canadian. The grooms were from America and had come to Canada to get married. As the justice of the peace pulled out the marriage license for them both to sign I remember thinking how grateful I was to live in a country where there my two friends, both men could have the same marriage license I had 10 years earlier. I love being Canadian, for many reasons- but this indeed is near the top of my list.

This past Sunday, I attended my first Chinese wedding and Chinese Banquet to follow. The ceremony was a simple, sweet celebration of love in chapel that was built in the 1800’s. It was 15 minutes from start to finish and the bride wore some very respectable bling. She looked pretty awesome. If that was not enough- at the Chinese Banquet to follow- there were indeed 10 courses (yes, I ran 22km that morning) and 3 costumes changes.

At the beginning of the banquet the bride emerged in a beautiful chiffon dress that made her look like a regal ballroom dancers. Throughout the course of the night she changed into a lace red gown and then into a wine coloured taffeta number. Each was more spectacular than the next.

Any event where they combine love, a ten-course meal and a fashion show together with Chinese Karaoke in the background really is my kind of wonderful. I indeed had a blast and was grateful that I wore an A-line dress to the reception in order to allow for my belly to expand during the meal.

Rest assured my sisters- I spent Monday afternoon riding around Stanley Park for a few hours until the salt and the ten courses had safely left my system.

Ten days ago, my beloved and I attended another blessed event. The Bride and groom were big Star Wars fans and yes, the cake was R-2-D-2. It was held at a country club and was a lovely, fun event complete with heartfelt speeches and a photo booth for guests.

These two weddings could not have been more different and yet the sentiment was the same. One was a Chinese Banquet and one had a Star Wars cake and a photo booth. Contrast this to my favourite Gay Wedding on an organic Farm on Galliano Island with my own traditional Hora filled night and you have an emerging theme….

Gather everyone you love in a room and tell them that they are really important to you. Oh, yah…. And promise the person that you love above all others- that you will be there in the morning, every morning, physically, mentally, emotionally and legally.

Interesting I suspect we will see similar studies involving same sex marriages over the next few years.

And so tonight as I put the finishing touches on GGTH, I am hanging out with my beloved. He’s this perfect person that I get to grow old with and hey…. Maybe the ceremony to get us to this place was a bit of a spectacle…. 16 years later- the picture really is perfect.
Posted by Girlfriend's Guide to Health at 2:00 AM