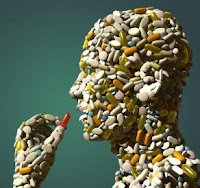 Just last week I found myself in front of a television in the middle of a weekday. You see my sisters- I had the stomach flu. Just the weekend before I sat next to an 11 month old child at a restaurant. Sure, he was in my dining party and yes he was adorable. But the cute ends there.

Innocently enough I gave him my cutlery to play with while we waited for the meal. Yes I know it may not be wise to give an 11 month old a fork and a knife for a toy- but hey, I am not a parent and these were desperate times- there were no crayons at this posh dining establishment.

And so this sweet cherub of a kid played with my dining utensils and amused himself while we waited for cocktails to arrive. He delighted the table with his cute little antics. He gave us joy and laughter as we watched his little show. And right then and there he also gave me a gastrointestinal virus. God bless the Daycare system.

Yes, I should have asked for new cutlery and no I did not. Why not, you ask? I am a doctor, I should know better. Well, I am not a parent. And NOT being a parent, makes you stupid in all things parent related.

So three days later I began vomiting during my clinic and PHYSICIAN HEAL THYSELF, I left work…. For two days.

There I was on a Wednesday afternoon, praying for death and drugs to kick in, hoping for a distraction….

And so I turned on the TV. What struck me most was the commercials. At 3 pm on a Wednesday on any given network, it has come to my attention that every second advertisement is for a commercial weight loss program.

Whether it is hyponotherapy or a bullshit program it has come to my attention that North Americans are getting bombarded with a variety of ill conceived promises.

I lost 35 pounds in 2 weeks and have kept it off for 5 weeks all with Raspberry Ketones.
My consellor at (insert weight loss program here) has 2 years experience in the business
Hyponotherapy really worked for me. After years of struggling with my weight I went to sleep and woke up thin.

I am not exaerating my sisters…. I am quoting from my television set. Now I know my sisters are smart enough to know that much of what we see on TV is indeed not real. But I could not help but wonder what this kind of relentless mind influence has on a vulnerable population who desperately want tot be healthy?

You would never see Jenny Craig pushing a new cancer therapy, nor would you dare see an add for hyponotherapy to cure your liver cirrhosis?

Sisters- do help. Shine a light on a mystery of mine. What is it that turns logical men and women in the world into the most gullible people in the world, ready to believe in anything?

Perhaps we are born to just believe in certain intagible dreams.

Think about it…. As little girls and boys we suspended belief on a daily basis- whether it was Santa or the Tooth Fairy or any Disney princess we just had believe.

Then we hit puberty and we moved on to bigger delusions involving video games and the internet.

As adults we follow suit with lottery tickets and weird fashion choices. Sure I buy a lottery ticket and yes, I’ve never won- but hey…. Someday.

Yes, the mirrors at my favourite boutique really are meant to make me look 10 pounds lighter- but hey- I am buying that dress because it makes my butt look good.

So why should I be surprised that everywhere across this great world at any minute there are thousands of men and women at this very minute willing to sell their souls for a promise some commercial makes for a better life, better face and a smaller ass.

Perhaps its that we all just want to believe in a little magic?

More than 10% of women have reported long term use of any agent for over 12 months time. Interestingly, less than 1% of users have reported successful effects. Of the agents used 73.8% contained some sort of stimulant, (either caffeine or ephedra). More than 50% of users used a supllement containing ephedra.

A Cochrane review published in the American Journal of Clinical Nutrition in 2004 looked at the evidence for over 25 weight loss supplements. The study involved over 35 trials and found no evidence that any of the supplements aside from ephedra offered any benefit.

There have been numerous studies pointing to the dangers of ephedra as a supplementation since.

In 2010 the FDA released a position paper warning consumers and patients against the harms of weight loss supplements.

In it the FDA cited a concern that some weight loss supplements are indeed tainted with stimulants and other prescription medication.

As a doctor I am constantly asked by my patients about the latest and greatest weight loss supplement. I would especially like to give a special shout out to Dr. Oz
For encouraging such behaviour. Promises, promises.

As a fellow girlfriend, I do indeed get it…. We all want to live the dream for a while and sometimes the dream is packaged just right. When I was 6 it was the Tooth Fairy, in my 20’s it was the lottery. These days it’s the skinny mirrors at high end retail stores.

AS for commercials on TV that promise to make me better, faster and thinner? I’ll stick with the skinny mirrors at Holt Renfrew…. At least I can see the look on my face while I’m trying on my next illusion.
Posted by Girlfriend's Guide to Health at 2:00 AM