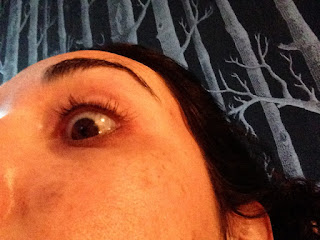 As I write this week’s guide, be warned my sisters- my face in is recovery. Let’s just say, I’ve had a little “procedure” shall we?

Oh fret not my sisters- it was not a big deal and although yours truly may have a flare for the dramatic (this of course explains my addiction to Italian fashion) I am just fine.

You see my sisters- I have or shall I say had a SPOT on my face. Vanity or not, just to the left of my nose there was indeed a brown discolouration the size of a fingerprint. It is (or rather was) a café au lait colour and well, recently it began to really piss me off.

Now I should tell you in my recollection this spot has indeed been there for about a year. But it is only in the last few months that I noticed that said café au lait  colour developed a stronger brew. My spot went from mild blend to a café Verona almost overnight. This is of course my witty way of saying that the spot grew darker in colour.

I should tell you that I sought many an opinion for this dermatological dilemma. I asked colleagues and had formal consults regarding the spot on my face. I convened international summits of said spots. (No I did not… I’m just being dramatic).

When it first appeared I thought nothing of it. Like most woman of my age- I spent my teens lying in a back yard in the 1980’s on a plastic chaise lounge covered in baby oil waiting for the sunburn that would soon “turn into a tan”. You remember those fabulous lawn chairs don’t you? The ones made in the late 1970’s with the strips of vinyl woven across that when you laid on them, face down for long enough- you were left with linear imprints of the vinyl on your face and across your chest?

I was not worried about the spot on my face because 3 independent Dermatologist friends told me it was just sun damage. I reasoned that having almost burnt my face of on the side of Mount Kilimanjaro would indeed do that to a girl.

Full disclosure, my sisters- I suck at wearing sunscreen. It’s not that I don’t see its value, hell yah I do. It’s just that I’m rather inept at remembering. In fact it has come to the point that my beloved is now tasked to remind me to put it on.

This typically occurs around long sporting events- say marathons- where I am going to be out in the element for 5-6 hours and my dreamy husband makes the requisite statement in a conversation that goes something like this:
“Sweetie, did you out on sunscreen?” my beloved asks.
“Yes, my love.” I say in a rush.
“Are you lying to me?” he asks sweetly.
DAMN. I am a horrible person.

And so I run the race with not much protecting me from the skies above. Such is it as well in the race of my life.

A few years ago I invested in and SPF moisturizer in the hopes that I could eliminate the hassle of putting added sunscreen on my face. I reasoned that if it was in the moisturizer I was good to go. Problem solved.

And then my spot appeared.

Yes, it was benign and yes, it can be treated. I will tell you the details shortly, I just wanted to cut the drama short and up front. But the problem was that it indeed messed with my head. You see my mother had skin cancer when I was a kid. Sometime in the late 1970’s she went to the hospital for a few days and came home with a large bandage over her left cheek. I can recall this in very vivid detail because I remember her telling us about how they were going to cut out the spot on HER face and then stretch the skin to make up for the place where the spot used to be.

Needless to say- you tell this kind of story to a7 year old kids and it sears itself on their memory while it is totally freaking them out. So imagine how many primordial neuroses were tapped into when a spot appeared on my face in exactly the same place as my mothers? Imagine my continued emotional paranoia when said spot got darker and a little bigger?

But then I met my lovely new Dermatologist- name with-held here. He is perfection. After a very thorough consultation he assured me that my little spot was an actinic keratosis. It turns out I also have some melasma on my upper lip. These are two common forms of browning discolorations that occur on the skin and are both often in response to age and/hormonal changes…. Who knew my 40’s would be so awesome? Can’t wait for the menopause!

My lovely doctor gave me a special cream for the melasma and suggested I have laser therapy on my face for the brown spot on my cheek (aka the keratosis- but I will call her Foxy Brown for fun).

And so this afternoon, I let a perfect stranger with a chit load of qualifications put some ice cold gel on my face, tape some UV protector goggles on my eyelids and then take a serious laser to my money maker.

The procedure feel like someone snapping a rubber band repeatedly on your face. This is followed by a flash of light across your skull. The sensation can only be compared to the experience of having someone light off firecrackers somewhere underneath your temple – not painful- but quite a light show. It’s not unpleasant actually- it’s just weird. Twenty minutes later, I was done. My face felt a little sunburned and the technician rubbed some vitamin C serum on it. I lay there with an iced towel wrapped around my face and contemplated what the days to come would be.

Yes, I could go swimming tomorrow. Yes, I could work and run and cycle and do all my activities. Yes, there would be some redness and my spot would likely blister. No I should not pick at it (oh how they knew me well).
Yes, it would take more than one treatment for Foxy Brown to leave my face but I should feel confident that she would indeed go.

The procedure being used to get rid of my sunspots was indeed called Intense Pulse Light or IPL.

IPL uses intense pulses of  non-coherent light distributed over a range of wavelengths from 500 nm to 1200 nm. The technology is used for both hair removal and for laser spot removal.

IPL brown spot removal works through firing short bursts of intense light at the skin, using a tiny hand-piece designed specifically for this purpose.  The light is absorbed by the colour in the pigmented cells, causing them to heat up and be destroyed.  As the epidermis replenishes itself the melanin rises to the surface of the skin, where it dries to form a micro-crust, which gradually flakes away leaving clear skin.

Of course this process takes time and I am told the full effect will be appreciated in about 4-6 weeks.

The same principle applies for hair removal in that the light targets the colour in the hair follicle and kills it.

Heads up sisters- I am also a hairy girl. I can blame the sun for the spots on my face. I can blame my Eastern European ancestry for the hairs on my lip. And so IPL is the perfect treatment for me… spots and hair be gone.  Two birds with one laser? That is a modern technology I can get behind.

Side effects my girlfriends are minimal. According to a study published in Dermatological Surgery in 2002, IPL is rather safe. The study looked at the side effects of IPL over 390 consecutive treatments.

The study concluded that although some pain is common, sever side effects such as scaring are rare (1 in about 400 treatments)

And so here I sit, another week gone. My face still feels like I’ve had too much sun and the little kid in me can’t wait to wake up every morning for the next 6 weeks to see what my face will look like.

As a doctor I am amazed every day by the wonders modern medicine has to offer. We really do live in the future; a future where one day you can lay down on a table, shine a glorified light on your skin and wait a few weeks to watch it disappear. No matter what happens tomorrow my sisters… today was a very good day.