I Gotta Be Me 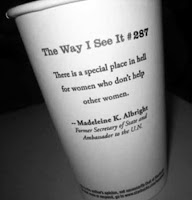 I am told by those “in the know” that we indeed live in the “GENERATION OF ME”. Yes, my sisters- welcome to it- the age of the self. Never before has the world been such a personal place. Facebook pages, Twitter handles and personal blogs (ahem). We all have officially been seen. Today’s world is one where everyone- and I do mean everyone has their name on things.

Don’t believe me? Go to a Starbucks. Yes, my sisters- their coffee is not the greatest but in a caffeine deficient pinch- a girlfriend can’t be picky. And so there I was….. this past weekend. Two coffees into my day and desperate for a third. No judgement on my caffeine consumption- pay attention to the story.

I found myself in a Starbuck’s Coffee Company. I ordered my “usual” Grande mild in a Venti cup when the woman at the counter asked my name.

“I’m sorry?” I asked
“Your name…. you know for the cup”
“Lola”, I lied. It’s my standard tag name for all coffee orders. When pushed to identify myself to a barista- I cave and give my dog’s name. Why? I don’t know…. I’m an asshole.

But in the next moment, I watched the man behind me go through the same ritual. There he was, apparently a regular whose name was “Glen”. Glen proudly said hello to the barista behind the counter who by the way she greeted him clearly identified him as someone who “came there often”.

“Hey, Glen…. What would you like?’ she asked.
“I’ll have the usual”. He said.
And then…. This cute little barista committed a coffee felony. She could not remember Glen’s “usual”.
“Uh, Sorry,” she sputtered…. “I forget. What’s the usual”?

Glen was clearly not happy. This was his version of that scene in Cheers where everyone knows your name and sure enough someone did not know who the hell he was. Well, they knew he was Glen… but that was only part of the story. And so, I watched Glen shamefully slink back from the land of the familiar as he ordered his coffee just like the rest of the nameless faceless masses.

I took my coffee cup labeled LOLA in big black Sharpie letters and headed towards the condiment bar. And there I stood for what seems like a while watching Glen and Shari and Janice and Sienna all wait for their lattes and americanos and half fat, no fat foams. They stood there in coffee land wanting to be seen or not wanting to be seen and I got to thinking…..

My generation has no problem having their name engraved on a coffee cup on a regular basis, but my mother still won’t give out her credit card number on the Internet. Was this progress or retreat?

Was this the ultimate mixed message? We talk about identity theft as though it were a social case of bird flu- heaven forbid it fall upon us. But here we are one generation after another throwing our names and witty banter around like its oxygen- waiting for anyone to inhale and exhale it at whim.

Could this be the ultimate mixed message?

Here it is 2013.  Personal Identity is something we guard so closely but give away so freely. We post pictures of the food we are about to eat and what we did twenty minutes ago without a thought in the world. But here I was unable to give my real name for a coffee and here Glen was unsettled by the fact that some random stranger could not remember that he indeed like his latté extra hot and with no foam….

Incidentally Glen- lattes don’t come with foam- that’s a cappuccino, my friend, but I digress.

What is it about our sense of being that makes it so precious to some and so transparent to others? Here I was somewhere between Glen and my mother. I was unwilling to give my real name at a Starbucks but I will shop for Canada on the Internet.

There is of course another facet to this whole identity issue that we have not even thought of. Amidst our need for being seen is the concept that we indeed all crave for that spice of life known as authenticity. Yes, my sisters… we girlfriends, we can handle the truth. In fact, we demand it. Whether it is in our online profile or in the mirrors at Holt Renfrew- we want a degree of honesty that reflect who we are.

But at the same time- we all want to protect that level of privacy. SO how to maintain an authentic, personal relationship with the world while still maintaining your privacy?

The answer is…. You don’t. Make no mistake my sisters- I do indeed believe we can have it all but I’m not sure where the personal meets the private that we should. When you want the world to see you there will come a time where putting yourself out there really is too revealing.

I have thought about this a great deal as a physician. Here I am a doctor by day and once a week I lay it all out there (expletives and all) in a loosely based medical blog that no doubt some of y patients will read.

When do I stop being a doctor and just become a regular citizen? Has the Internet indeed limited this ability to separate medical church from state so to speak?

Indeed the American College of Physicians just recently released a position paper on medical conduct and the Internet. In this position statement published on April 16, 2013 in the Annals of Internal medicine the ACP acknowledges the power of the Internet to educate and inform patients and to indeed improve quality of care. However, the ACP states:

To protect patients and the public and promote quality health care, it is critical to strike the proper balance to harness opportunities while being aware of inherent challenges in using technology. But as others have pointed out, “Connectivity need not come at the expense of professionalism”

And so as a sister, I do what I do best. I walk a very fine line in four-inch heels and I hope for the best. I put myself out there every day in my practice and here and there in the media. Judge away my girlfriends…. But not until you’ve walked a mile in these heels. And indeed, thereafter do be kind. When I find myself in a Starbuck’s ordering my coffee…. That’s when I draw the line. Yes, I’ll be real in almost every place in my life, but when it comes to my “Grande mild in a Venti cup”, well, that’s indeed when you can just call me Lola. 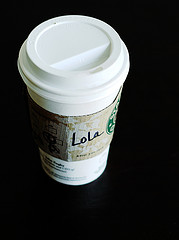