Heads up girlfriends, I realize among my strengths, I make a good argument. This is not about anything in particular, it is merely an observation of my character, which is to say, that when it comes to confrontation, I am as comfortable in conflict as I am in any Saks Fifth Avenue in the world.

My beloved, however has taken years to rise to the task. When we first met, he faced any dispute with eyes drawn to the ground for fear of opening his mouth lest I shove my proverbial fist in it. In his defense, I do believe this is both a common and a safe response for a man having a verbal Tet a Tet with the opposite sex.

Not to be sexist, my sister, but women as a rule- are good in a fight. We mastered the language early on and we are not afraid to use it.

Scientifically girls learn language before boys and form sentences well before their male counterparts. Studies show that little girlfriends love to talk- first to ourselves and then to one another.

Let’s take me for example? Here I go, using my own experience in the name of science….
I lay in bed each night for most of the 70’s in my pink and silver disco room lit with the token night light.  I had full on conversations only an eight year old can have about what I would wear to school in the morning and who I would be when I grew up.

Over the years that followed and the room has changed but the music remains the same.

I have spent much of my life talking to things in succession that cannot answer back. First were my Barbie dolls that bore an immense amount of optimistic responsibility. I played both parts answering them as my imaginary muscles flexed with vigour.  From there, I moved on to a variety of animals… first the fish, then the hamsters, now the dogs. Their little heads cock to the side as if they “get me” and somewhere I do acknowledge this unreasonable argument to be true.  How many of us have whispered in a dog’s ear at one point in life…. “You understand Spotty, you love me.”

I have moved on through life to talking to ads in magazines- cursing the skinny blond that lies across the pages eating whatever she likes. I have had full discussions with television programs in order to cultivate my debating skills. I am the Bill Maher of my own living room.  I have had full on conversations with my girlfriend’s baby daughter who stares up at me smiling as a result of gas and not out of comprehension.

I have had one too many midnight talks with unconscious patients on life support in Intensive Care Units across this country.  These eerily one-sided discussions are shamefully reminiscent of a tacky movie scene. The lights are dim a lifeless hand is in mine as I will a perfect stranger to overcome a disease that is far bigger than the treatment I have to offer.

Many of these conversations end with ones we have all at the gravestones of parents and friends with long discussions of how things have become and what should have been.

So after millions of words have passed my lips, it is no surprise that I can kick my husband’s ass in an argument. Or at least I used to. After 18 years together, I must say… in the argument Olympics… he’s a gold medal contender.

I say this with pride as though I am training an athlete. When we first got together his eyes looked at the floor and I could sense there was an internal voice that just wanted to know when the fight would be over.

Now, many years later…. He gets his point across with a respect for both me and for the English language. There is no yelling, there is a discussion- eyes are met, minds are met and yes, I am sometimes wrong. It is very grown up and quite frankly, kind of hot. But I had to ask…. Is it healthy?

In 1994, a study published in the Journal of Biobehavioural Medicine examined certain hormones in newlyweds. The study showed significant rises in the Growth Hormones  and Epinephrine and Norepinephrine (hormones linked to the “fight or flight response) in couples who were arguing. Furthermore there were sex-based differences in these fluctuations. Naturally our body physiologically responds to an argument by adjusting our neurohormonal make up to accommodate. What was most remarkable was that these fluctuations were statistically different between men and women.

Another study published in Health Psychology in 1991 examined the impact of normal family arguments on 24 females and 19 males (aged 32–73 yrs) with high blood pressure. Patients and their partners discussed a threatening disagreement for 10 min while blood pressure (BP) and conversation were recorded. Discussing problems increased BP, but the causal pathways differed by sex. In women, hostile interaction and marital dissatisfaction were associated with increased BP; supportive or neutral exchanges were unrelated to BP. In men, BP fluctuations were related only to the patient's speech rate.

These findings are consistent with other research on sex differences in communication and social problem-solving styles and implicate different mechanisms involved among the sexes.

Now, I do not have high blood pressure and I do believe Jason’s also runs a cool 120/80. Perhaps as we get older and continue to settle in discussing and debating with each other our physiology will adapt as much as our discussions have. Until then, I will continue to challenge and be challenged in the hopes that like my sisters everywhere- I will have the last word. 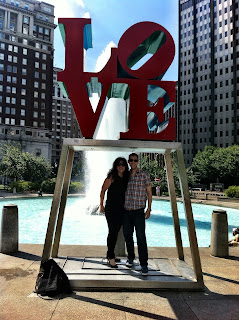 Posted by Girlfriend's Guide to Health at 4:00 AM