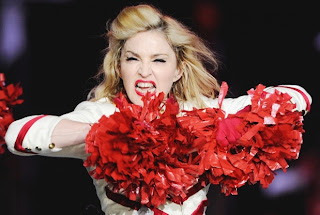 Picture it my girlfriends- or rather let me set the scene. There I was just another material girl on a Saturday night in Vancouver. This time, however, I was among 10,000 of my closest material friends. For indeed on this night I was at the Madonna MDNA concert.

It was around 8 pm and I was of course dressed in my concert appropriate attire. My shoes were 7 inches but there was a platform so as to allow for both the ability to see over the person in front of me while still allowing me to stand “confortably” for the next 4 hours. Finally my servitude to fashion would come in handy. The person in front of me was 5’6 and I easily cleared him by a good four inches thanks to a pair of Louboutin stilts that to this day continue to be a valued investment. (no Judgement my sister- she works hard for the money).

The hours ticked on. I checked my email. Watched the crowds and picked my cuticles. Finally at 10:30 ish- Madge showed her biceps.

Now may I rant on a fellow sister- Ms. Ciccone if you are indeed reading this- can we talk about the fact that although I’ve been a fan since the Lucky Star days, I find myself needed to Justify my Love over the fact that you made me wait for almost 3 hours with only a DJ for an opening act. Yes I know Martin Skolveck (Madonna’s opening act) won a  Juno- but really? He’s a DJ. No dissing the DJ- I do love me a human hat can spin an i-tunes track or three and look funcky doing it. But I love me this when I’m at a club…. Not a concert.

FYI- I’m not a big club fan to begin with so heads up- Martin’s musical stylings were likely lost on me. I’m sure he’s fabulous and his parents are pretty proud- but as my girlfriends know- I am shall we say- a bit old school. When I go to a concert- I like, well…. A concert.

SO there I was, sitting 23rd row floor (yes I am name dropping my seat- they were after all very good seats) when the queen of Pop came on in a  flash and a flurry or Roman Catholic/Kabbalah fabulous and I did what any self respecting 41 year old woman would do now 60 minutes past her bedtime…. I put my earplugs in.

Yes,  I did indeed buy earplugs for the Madonna concert. Truth be told, I had learned my lesson some years ago when U2 came to town. There I was in the Mosh pit, Bono singing to me for God and Country and my ears were bleeding. I loved the concert and left all aglow in Bono’s light, but could not hear properly for days.

When part of your job is to listen to the sounds the body makes, it’s important to keep your ear canals in tact.

And so although  Miss Madge made me wait tow and a half hours to hear the sound of her voice (was it live or has it lip synced?) I refused to lose my upper decibels in the process.

The human ear is divided into 3 parts -- the external, middle and inner ear. The inner ear is located inside the skull and is quite frankly the ear’s “business end”. It is the most complex part of the ear. The soft tissue of the inner ear is made of different types of cells and nerves, all arranged in a pattern on a thin sheet of tissue. Noise induced hearing loss results from damage over time to the nerves and cells of the inner ear.  Piss the inner ear off too much and you will get permanent hearing loss.

Whether noise harms your hearing depends on the loudness, the pitch and the length of time you are exposed to the noise. The loudness of a sound (measured in decibels, or dB) and the length of exposure are related. The louder the sound, the shorter the exposure can be before damage occurs. For example, 8 hours of exposure to 85-dB noise on a daily basis can begin to damage a person's ears over time. Using power tools (at about 100 dB), listening to loud stereo headsets (at about 110 dB), attending a rock concert (at about l20 dB) or hearing a gunshot (at 140 to 170 dB) may damage the hearing of some people after only a few times.

According to the Centre for Disease Control an estimated 17% of people ages 16-60 have experienced some form of permanent noise induced hearing loss. How many of them experienced said loss at the hand of a car stereo remains one of life great mysteries.

A study published in the American Journal of Industrial Medicine showed that the average sound level in a music club (or a bar) was 95-107 decibels well in the range for permanent hearing loss. 76% of club employees tested at 8 different clubs experienced some form of noise induced hearing loss.

A further study published in the Journal of the Canadian Family Physician in 1993 took 22 volunteers to a rock concert. Their hearing was tested before and after the concert and at 10-minute interval throughout to determine how long an exposure would be dangerous.

The study also looked placed the participants at different locations throughout the arena to determine where the “danger zones” would be. Interestingly it was NOT the group closest to the stage that received the highest exposure to noise. The study does not site where this group was sitting. However all participants in the arena received at least twice the accepted dose of noise (at least 240 decibels). The study went on to show that after 7 minutes of exposure the participants hearing began to decline with 12% experiencing residual effects to hearing loss 14 days later.

There you have it my cybersisters- another week of real world science. The concert was indeed a wonderful thing. Yes, I am aware that the reviews were mixed but hey, it’s a big world with ever so many opinions and you can never keep all the girlfriends happy. This sister has put her vote in and I do indeed feel that a good time was had by all. The concert was dark in places perhaps and no I did not need to see Madonnas’ ass in a G-String and fishnets but overall Miss Madge put on a good show indeed.

And so sometime after midnight when all was sung and done- I took out my earplugs, And sure enough my ears were as fresh as the day they were born. No ringing, no pain, and no decrease in function whatsoever.

And so I sauntered home sometime near 1 in the morning listening to the sights and sounds of my city knowing all too well that thanks to my earplugs my ears were indeed- touched for the very first time.

Posted by Girlfriend's Guide to Health at 10:23 AM