Will Run for Shoes 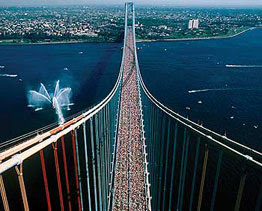 Big week this week my girlfriends. I am counting down for glory as they say. No Barneys is not having an early bird sale, but yes I am off to Manhattan and many, many outfits must be worn.

As some of my sisters know (yes I have been rather vocal.... me? you say? A loud mouth? Heavens no)  come this Sunday, I and 50,000 of my closest friends will be running the ING New York Marathon.

Yes my girlfriends 42.2 kilometres stretched out before me, all five boroughs of New York and off I will race for glory.

Big love to my running coach, whose arms shall remain nameless (you know who you are, Kristina) and an equal debt of gratitude to my personal trainer, Mr. V. for tolerating my endless, breathless chatter, excuses and yes, witty profanity over the last few months from the confines of the gym while we prepared this object (who really prefers to stay at rest) for motion.

I should tell my sisters- that although I have later in life become somewhat of a fitness fan, I was not always a person who liked to get her heart rate passed 100. Yes, my sisters- I would say that for most of my life I was somewhat of a lazy pants. (FYI- "LazyPants would be a great name for a fashion line- you heard it here first)

When I was a kid- my mother enrolled me in little league. I was a rather chubby child and as such lacked the grace nor the genetics needed to hit a ball a respectable distance. Nor did I really have the physicality to chase a ball that was hit my way. Truth be told- i hated the sport- I found it unstimulating and rather pointless. I was competitive in school but my ambitions ended there. And so if you stuck me in a baseball diamond- the only thing that really appealed to me is that there was the word "Diamond" in the name and unfortunately jewelry was not part of the sport.

And so, like any good coach worried for the success of his team- mine put me in centre field.

I ask you dear sisters- do you know of any 6 year old girls who can hit a ball past the infield? It's a rare feet. And so, I spent 9 innings sitting (not standing- what was the point really? No 6 year old chick was gonna hit a ball my way) in centre field eating grass and daydreaming.

Fast forward to age 9 and my mother enrolled me in hockey. I was on an all boys team and was of course - given my girth- place in goal. The coach thought that my generous hips would be more likely to stop the puck. The boys, knew better and had an unspoken rule to "aim for her boobies". yes, they yelled this freely from the ice and the bench.

In medical school my roommate was an aerobics instructor. I liked to use the step aerobics set she had in our apartment to hold my coffee and ashtray. It was my moment of rebellion perhaps?

But then about 12 years ago, I got religion. My journey to health began and now, in my head, at least, I'm a machine.

And so I have spent the last 20 or so weeks training for my marathon. Why a marathon you ask? Why indeed. I have no great answer only to say - BECAUSE I CAN.

You see dear girlfriends, I ran a marathon in 2008 and was convinced it was my last. It was brutal- as most marathons are. From there I switch to smaller distance races and triathlons.

And then I got injured. I tore my hamstring and was told I could not run. I went to rehab and physio and was the worst patient ever- but I did heal and sure enough back in March could start running again.

All that time off from running of course made me focus on cycling and swimming and I loved it. But I did miss the running. Make no mistake- I did not miss the pain and the pounding- the feeling you are going to die at moments and the fact that it just really is a sport that I will never be good at.

Instead I think I do it because of the the fact that I just don't like being told that there is something I CAN'T do.

I've heard it all- running causes arthritis, running a marathon can kill you. On this week the eve of my 26 miles to glory I say with science and a smile.... BULLSHIT.

A 2006 study in the Journal of the American Osteopathic Association found that “Long distance running does not increase the risk of osteoarthritis of the knees and hips for healthy people… long distance running might even have a protective effect against joint degeneration.”

The article went on to say that running also decreases the risk of cardiovascular disease, diabetes mellitus, and depression, helps with weight control, improves bone density, and decreases mortality.

One of the best studies to prove this point is the 50 Plus Runners Association Study that was started in 1984. When it was launched a control group of subjects age 50 + were chosen and studied at 5 year intervals.

The study compared runners who averaged 26 miles per week with a non-running group. The most recent report published in 2009 in the Arthritis Research & Therapy Journal found that the runners experienced about 25% less musculoskeletal pain and that women runners benefited the most.

Those at risk of joint damage are runners who log high mileage (more than 120 km/week) every week for many years and who have a previous history of injury.

On the marathon and dying front, it seems that every year there is at least one news story of a person dying during a marathon. There have been a few cases of runners dying suddenly and it is important to look at some of the potential reasons for this.

Marathons don’t cause heart attacks- heart disease causes heart attacks. Studies show that almost all marathon deaths were as a result of underlying cardiovascular disease in a person who was exerting themselves.

A study published in the British Medical Journal in 2007 looked at the mortality rates from marathons compared to motor vehicle accidents in a retrospective analysis.

The study looked at how many people died in these marathons and then compared these numbers to how many motor vehicle fatalities occurred during these events in the given city they occurred. The hypothesis of the study was that there may be less motor vehicle fatalities due to the fact that there were road closures during these events (and therefore less traffic) in order to allow the marathon to occur.

Marathons  in the USA with at least 1000 participants between 1975 and 2004.
The marathons provided results for 3 292 268 runners on 750 separate days encompassing about 14 million hours of exercise. There were 26 sudden cardiac deaths observed in all, equivalent to a rate of 0.8 per 100 000 participants.
Because of road closures, an estimated 46 motor vehicle fatalities were prevented, equivalent to a relative risk reduction of 35% . The net reduction in sudden death during marathons amounted to a ratio of about 1.8 crash deaths saved for each case of sudden cardiac death observed.
The net reduction in total deaths could not be explained by re-routing traffic to other regions or days and was consistent across different parts of the country, decades of the century, seasons of the year, days of the week, degree of competition, and course difficulty.
There you have it my sisters- I am officially a runner and on Sunday, do pray for me my sisters, for I will be a marathoner; with no real increase risk of arthritis and la 35% less risk of death than dying in a car accident.

Given that I don’t own a car and rarely drive- I’m not sure those numbers are indeed correct but I am making a point, No?

A fabulous week to all my girlfriends, I will be resting up and eating carbohydrates without guilt. When next we meet I will have a medal around my neck, a suitcase full of New York’s finest fashions and of course a belly full of Advil. Who could ask for anything more?

Posted by Girlfriend's Guide to Health at 3:00 PM