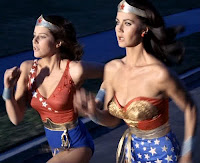 A big shout out this week to one of my newfound girlfriends whom I met along my way to marathon. Not only is she fabulous, she gave me this week's blog idea! See what happens when you give me feedback, my sisters? It comes back to you ten fold.

As my cyber sisters know I am currently training for the NYC marathon in November 2012 and girl is my ass tired. Why just this past Sunday a 23km left me feeling like Wonderwoman.

Recall my sisters that Wonderwoman first appeared in All Star Comics #8 in 1941. She was likely around 20 years of age which puts our Wondersister around her 91st birthday. Bitch likely needs a hip replacement. And so on Monday morning I can honestly say I felt like a 91 year old superhero in need of an artificial joint of some kind.

All this running has got me thinking. A girl has no choice to engage her brain when you are spending hours on the road Forrest Gump style.

Like my outfits and choices in hair colours, I have good runs and bad ones. But I could not help but notice that some of these variations do indeed coincide with THAT TIME OF THE MONTH.

In other words, not only does my female cycle delegate my moods and my shopping habits- it also tends to influence how my rubber meets the road.

This very concept takes me back to my first ever running group in 2004. I should preface this by saying that running tends to bring out the most personal of conversations. I find the conversations held in running groups to be more intimate than those held in therapy sessions.

Don’t believe me? Try this one at home. Put a group of people together and make them run a 20km course. At about 8km in you will find that the talk invariably turns to body parts in some way.

Put a group of women in that same scenario and inevitably you have a full on discussion of our monthly bill, so to speak.

And so it was on a recent 22km run around Vancouver a couple of weeks ago. I was not there of course- I, like a cheetah- run alone. But my beloved likes to run with a group of delightful women from Vancouver, Ireland and New Zealand (you know who you are ladies- he thinks you are fab and finds your accents rather charming).

And so he returned from his Sunday morning long run with a question I had not expected to hear.

“Sweetie- the girls want to know what the effects of their period is on their running.”

And just like that, I had a Tuesday morning topic.

Having been involved in a few races in my time- I could speak to my personal take on the issue. I personally LOVE getting my period the morning of a triathlon. The next two hours are going to be grueling anyway- why not add sanitary napkins to the problem? I mean nothing says challenge like a tampon in you wet suit. No? Am I being too visual my girlfriends? Just tell me and I will back off.

In fact such a question is ever so timely with the Summer Olympics descending upon us.

My sisters will recall how much I LOVED Vancouver 2010. I cried like a girl at the whole ceremony of it all. London 2012 I suspect will have the same effect on me. There I will sit along with a collective world and hope for the best as individuals unite in the strength of their spirits and the power of sport and silence the world’s troubles for a few brief moments.

But I wonder? Will any of those female athletes get their period during those 16 days? And if she does…. Will it cost her the gold?

There are four phases to a woman’s menstrual cycle that lasts on average 28 days.

Day 1-6 is the Menstrual Phase- insert blood here. The uterine wall sheds and well you feel like your pelvis is broken and everyone around you is annoying as hell.

Day 6-14 is the Follicular Phase- this is when the follicles (egg sacks if you will) start to grow in preparation for releasing an egg.

Day 14/15 is Ovulation. This is EGG DAY. Also known as the day many women track like a good shoe sale (if they are in the breeding mood)

Day 16-28 is the Corpus Luteal Phase (Or just Luteal Phase) when the uterus get ready for a fertilized egg to implant . No implantation? You go back to the menstrual phase and shed the lining.

In short the whole cycle is basically a communication between releasing an egg for fertilization and then setting up a favourable place for it to grow in the uterus. If you don’t use the favourable lining and implant a fertilized egg…. You lose the lining.

It’s kind of like a hormonal lay-a-way plan. You invest in a fabulous handbag all month- putting a deposit away to hold it for you. If you don’t buy the bag- you lose your deposit. Well… not exactly like a lay-a-way but I needed a flippant comparison and that’s what I came up with… in a pinch.

I myself find that I am most athletic in the few days leading up to my period- or my luteal phase. Perhaps it is because I am raging bitch at this point and need a safe and healthy outlet. Most runners I spoke with find that they are at their best right after their menstruation. And yet again my sisters- I realize that I am not like the rest of the planet…

According to a HOME GROWN study done right here in beautiful Vancouver and published in the Journal of Sports Medicine in 1993, there is considerable variation among athletes with regards to fitness and monthly cycles. Not only does it depend on the athlete, it depends on the athletics as well.

Furthermore,  13% to 29% reported an improvement in their performance during menstruation. The best performances were generally seen in the immediate postmenstrual phase and in the first few days of menstrual flow.

Unfortunately this study has some inherent biases. Firstly the study was self reported and many women studied could not accurately state where they were in their cycles. Symptoms of premenstrual syndrome are often seen as detriments to performance and again in a  self reported study this can’t objectively be tested.

Interestingly  studies have shown that neuromuscular coordination, manual dexterity, judgement and reaction time for complex tests have been shown to be adversely affected in women with premenstrual syndrome or symptoms

When objective measurements were taken into account, there are indeed some variations in performance based on certain sports.

For example, swimmers have shown a premenstrual worsening of performance times with improvement in the menstrual cycle. This does make sense because progesterone is highest in the premenstrual period and this hormone has been shown to increase perceived exertion.

Cross country skiers were found to have a similar picture with their best performance being immediately post ovulation and post menstruation.

As for runners? I suspect the same is true.

As for what to do in these times… the evidence is pretty clear. Suck it up my sisters… this too shall pass. We are women after all. If we can walk a few miles in four inch heels we can run a couple of dozen with mind numbing cramps, No?

And so my sisters, with the science before us it becomes pretty clear- whether you are planning for a race, planning for a family, or just planning for a fabulous outfit…. It best to coordinate your cycles. After all, my girlfriends, haven’t we all learned at one time or another that a great performance really is our best weapon.
Posted by Girlfriend's Guide to Health at 4:00 AM