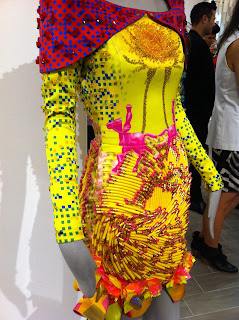 It’s Tuesday dear girlfriends and what better a day than today for us to have a heart warming chat about my favourite topic??? Fashion. I must say, my sisters I rather enjoy our time together, where we sit and sip a coffee and braid each others hair and gab about everything from REAL HOUSEWIVES to real LOUNBOUTINS to real breast implants and all the paradoxes in between.

I’ve grown accustomed to our weekly meetings, sniff , in a sentimental way. And as my girlfriends know I am, anything but, sentimental. So shall we start the week off again with a little chat about every doctors staple? The Little White Coat.

Let me state it plain my girlfriends, this doctor does not own a little white coat. In fact I would argue that my work outfit go to item is indeed a little black dress and some fabulous 3 inch kitten heels.

NOTE: I am aware that 3-inch heels would by no means qualify as “kitten heels” according to any fashionista- but for a woman who insists on wearing 5 inch platforms at all times- anything lower really is a small cat.

So let’s talk about that Little white coat? I have never been a fan. In my medical school days I remember getting my first white coat. We wore them at first in CLERKSHIP- our last year of medical school when we were required to see patients full time. Our clerkship coats were the shorter variety. The were a stark white poly-cotton blend of fingertip length that fit you like a tent and hit you just at the hips.

I was , my sisters, a chubby clerk. No need to argue- I’ve worked it through. As such my clerkship coat only served to make my hips look even larger than my brain.

By residency we graduated to an official long white coat and well… let’s just say… it did nothing for me. A white poly-cotton boxy fit? Not my best look.

As my sisters know, I have never been one to mock an outfit or to shy away from any article of clothing. I am after all a slave to fashion. But the white coat, despite its history never really did it for me.

Let’s be clear. Clothing really does influence how we perceive an individual. The white lab coat first made its appearance in the 1800’s. Prior to that, lab coats were beige (perish the thought) and worn in…. you guessed it… labs. Doctors instead wore black.

According to my sources black was chosen as the clergy wore black at the time. If you ask me, black, is an excellent colour. Thank heavens my profession had the foresight. Black is slimming, fashion foreword and hides the blood stains quite nicely.

Things changed by the end of the 19th century with tremendous progress in public health and sanitation. Recall that before that, you rarely could get anyone to wash their hands… let alone if they were sticking them into you. Once the germ theory became well known- meaning that it became widely accepted that most infections could be prevented with good antiseptic technique- the medical field became focused on being more scientific and evidence based.

Remember that before the late 19th century, you could get a medical degree in about a year and there were very few standards of practice.

And so as medicine strove to be more scientific the lab coat seemed like the perfect symbol for this new scientific age and this new philosophy. White, after all is the colour of hope, both before and after Labour Day and so white was adopted as the colour of the doctor’s coat.

Surgeons in fact became the first to wear the white lab coat. It became wide spread in the early 1900’s and by mid century was the standard fare. To this day many medical schools still have a “white lab coat ceremony” where you receive a white lab coat upon entrance to the school.

Although we never had a ceremony in my medical school- it was understood that whenever you saw patients- you had to wear a white coat.

The minute I finished my residency…. I burned all traces of it.

I should say that aside from the rather unflattering look of it all, I find the coat only serves to separate me further from patients. We live in a world where patients WANT their doctors to be people too. Put on a white coat and the dynamics change- and not necessarily in a good way. What I wear is a large expression of who I am and I have never felt that I needed to conform (no shit) to certain norms in order to be more effective. Not at work and certainly not in life.

Turns out, many of my colleagues agree with me. According to a study published in the Journal of the American Medical Association in 2011, only 1 in 8 doctors still wear a white lab coat. Most pediatricians and psychiatrists NEVER wear one- the practice was long abandoned in these specialties as it was thought to frighten patients.

Paradoxically a number of surveys show that patients actually prefer the white lab coat because it helps them identify the doctor. As for me? I prefer to open my mouth and introduce myself to the patient- I verbally identify myself and then they can spend the next few minute admiring my outfit while they let it sink in that yes… this chick really is a specialist. Who knew?

In Britain the white lab coat had officially been banned. Who would of thought that the Brits who always love a good ceremony would do away with the ceremonial garb? Turns out, a further study in the BMJ showed that white lab coats impeded docs from washing their hands and increased the risk of hospital based infections. See? Not only is that white piece of shit unflattering? It’s a death trap. There you have it my sisters…. Again I am ahead of time. I hear the bells ringing – the death knoll for the white doctors coat and I can’t help but smile a little sigh of victory.

I’ve said it before and it remains ever true… Good fashion really is the best medicine.
Posted by Girlfriend's Guide to Health at 4:30 AM