Measuring my Life in Coffee Cups

Oh, my girlfriends, we al make life choices don’t we? Who we are is merely a compilation of all the things we have decided to do. Some of them are far more calculated, others fleeting.

The Mary Katrantzou skinny jeans I am currently sporting with the fabulous soda can print do in fact make me feel like a rock star despite the fact that my beloved does not agree that they are indeed a life altering piece of clothing (Don’t mind him my girlfriends- sometimes as perfect as he is- the dude lacks vision). This was a life choice that I truly feel self actualized about and one I will defend until the end.

As for my other life choices? There are quite a few. I find many of them do require a variety of defense levels under certain circumstances.

I don’t have children, for example. I am one of those rare birds in the world (heads up- we’re 40% of the female population) that is indeed childless by choice. I never really wanted kids, to be frank. Quite honestly, the only time I feel the need to explain or even defend this position is usually to a couple sporting a baby and asking me with a grin, “would you just love one of these????”

I don’t like driving a car. I hate being confined behind a wheel or in traffic and subject to rules of a road. I never want to own another car again. I want to ensure that the rest of my life is structured such that I never have to drive a car on a regular basis EVER AGAIN. This sometimes offends people’s belief system in that they feel that my life choice is a direct reflection on theirs. It’s not. I just don’t lie to drive.

On the fashion front- I LIKE spending a stupid amount of money on shoes. I know it’s frivolous and unnecessary, but it’s my life choice. I pay for my own shoes and no one gets hurt in the process. And yet, I still somehow (real or not) feel the need to defend my life’s purchases. Insert sad face here.

As for my food choices? Yes, I’m vegetarian, mostly vegan. Vegan, nonjudgement as I call it. It works for me, thus far, to eat a whole foods, plant based diet and that’s the way, aha, aha, I like it, aha, aha.

I think we all live in judgement of one another’s life choices and somehow, I am okay with it. How we perceive one another really is often how we get by in the world and form our own perceptions. Let’s be honest, how we look at one another is often a reflection of how we look at ourselves. I’m not opposed to us looking at a particular situation and asking ourselves how we feel about it. I think it is perfectly fine to have an opinion about something. In fact I would argue that much of our society breaks down when indeed we lack opinions and beliefs about certain issues.

Where I do draw the line, however is when those judgements become so vocalized as to polarize a nation. When your beliefs become the basis of a binomial decision making process (right or wrong), well, then, Houston, we do indeed have a problem.

I make this point because I have found that my consumption of coffee does indeed offend people. I should say that I am indeed a BIG coffee drinker. I can easily consume a dozen cups daily if given the chance. No, I no longer drink coffee by the pot load but let’s just say, I have indeed cut down to the espresso equivalent of 6 shots a day.

I can’t help it. I love coffee. I love all kinds of coffee. Americano, plain drip, and French roast- you name it. I love it a certain way- skinny with legs. I am as particular about my coffee as most people are about their most intimate of things.

In fact I would argue that coffee is indeed a personal expression of the highest order. Ask someone how he or she takes their coffee and they will indeed show you who they are.

I am an Americano with cream and 3 splenda- translation? I’m authentic but with flare. I like a real coffee but I want it with just enough of a high maintenance to have my signature on it.

As a doctor, I am often asked to defend my coffee choices. I had long shrugged off many a judgemental derision to my caffeine consumption as necessary means for staying awake and engaging in the maintenance of another’s well being. That, or I typically just told the inquiring individual who challenged my 3-4 cup a day habit that it was, “none of their fucking business”.

But now, dear girlfriends, I stand vindicated of my caffeinated choices by none other than my good friends at the New England Journal of Medicine.

A recent study published in the New England Journal of Medicine in May 2012 showed that coffee consumption in fact lowers a person’s risk of mortality.

The study examined the association of coffee drinking with total and cause specific mortality among more than 400,000 Americans ages 50-71 years old. The study, conducted through he National Institute of Health, looked at 229,119 men and 173,141 women and their dietary habits. The study examined coffee consumption at baseline through a self-questionnaire and then followed participants from 1995 to 2008. During this period of time 33,731 men and 18,784 women died.

After adjusting for age and other risk factors including smoking the study showed that women who drank one cup of coffee per day had 5% less mortality than those who did not consume any coffee. Mortality rates further dropped as follows: 13% less for 2 cups a day, 14% less for 3 cups a day and 15% less for 4-5 cups per day. There were similar results among the men in the study as well.

These results were similar among subgroups who had never smoked or who reported having very good health.

Overall the study is definitely interesting. Although not a perfect trial it does not assure people that coffee saves lives. What it does indeed do is suggest that coffee consumption is NOT harmful.  Sure it has its flaws but one thing is for sure- I now longer have to defend my coffee consumption. Yes my girlfriends, another life choice that science can in fact defend along with me.

Here is where I sit back and enjoy my Americano while I wait for the evidence on the benefits of fashion to cure cancer….if only, my sisters… amen. 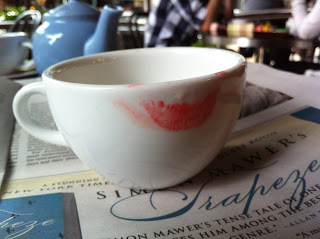 Posted by Girlfriend's Guide to Health at 5:00 AM