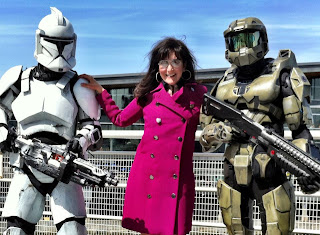 Well my girlfriends- I have seen the future. I have glimpsed into the universe beyond and well, it is a rather interesting place. Just last weekend I attended Vancouver’s Fan Expo.

For my girlfriend’s whom I’ve left in the dark Fan Expo is a rather interesting event which takes place in cities all across North America. It is a weekend endeavor where (how shall I say this politely?) fans of comics, superheroes and science fiction convene in a given location and show their love in a collective expression.

Translation? Fan Expo is convention where geeks far and wide gather together to speak Klingon and feel for one great weekend that yes, they will indeed inherit the earth in the event of a zombie take-over.

What was I doing at Fan expo my girlfriends ask? Had I mistakenly wandered in under the pretense that this was a sample sale gone wrong? Heaven’s no. I was there for love.

As many of my cybersisters know, the love of my life is a first class geek. His comic book compilation rivals my own collection of Italian footwear. I am told that they remind him of his youth and days gone by. In fact the whole “geek mystique” really is about a place in time when we were the superheroes in our head. When we dreamed about being Superman, saving the world from the villains and of course getting the girl.

And so, not a fan of comic books but most definitely a fan of imagination and the act of embracing the best our memory banks have to offer, I Made a date with my beloved to walk down his boulevard of broken dreams and dwell in the possibilities.

Enter Fan Expo. Firstly- let me say that what follows is an outsiders account of the geek world. I do not intend to mock or make fun. I love geeks. Hell, I live with one and think he is the best person I know. My favourite people are geeks.

By the same token, I don’t pretend to understand the allure of dressing up like a Japanese gaming character and standing in line to pay $60 to take a picture with Adam West from the old Batman series.

There we were in a room full of people who en masse looked really like the smart guys in grade school. The dress code seemed to involve either a costume of some kind or a grey hoodey.

I of course did not dress appropriately. Decked out in Dries van Noten fabulous trench coat and 3 inch Louboutin pumps (these shoes were made for conventions such as these) I felt like my own version of a superhero. If these could dress up like Superman or Batman or Ghostbusters, I could be my very own superhero clad in a stylish Italian made cape and heels- ready to leap tall buildings with a single pump.
It struck me that these guys (yes there was easily a 7 to 1 ration of men to women) were truly dwelling in the times gone by. Hundreds of boxes of comics were stacked with every kind of comic book from generations gone by. Every imaginable superhero paraphernalia was for sale including a batman bathrobe and a porcelain figurine of the SHMOO (remember him?)

There were a number of booths where star wars characters were dressed up ready for battle complete with light sabers and an audience. As well, the room was full of booths of aspiring comic book artists, media artists and character creators all selling their wares in the hope of becoming the next Stan Lee (he made Spiderman for those of you who did not know that).

At the end of the hall was the autograph area where a number of famous characters were available for a “meet and greet”.  Lou Ferrigno (aka:the Hulk) was sitting patiently waiting for his fan base. Lou’s in great shape and seems like a lovely fellow. I said hello and mentioned that I was a fan both of his “Hulk” days and his stint on Celebrity Apprentice. Lou was charging $40 for an Autograph and $30 for a photo with him.

Yes, my girlfriends, step right up- memories for sale. I could not help but wonder what happened to it all. When did our nostalgia get its own price tag? When did it become okay to sell an interaction or a service that really has no meaning? Hey, I could understand if Lou had a biography for sale and he wanted to sell me a signed copy.

But $40 for a signature on a piece of paper? What is that? Am I the only cyber sister who thinks that if you are going to shell out cash you should at least have something legitimate (like an accessory) to take away with you.

Paying for an interaction with a person that seems more like a common fan courtesy seems well, like Lou has become…. How shall I put this? He’s become a memory whore. Yes, harsh but true.

I suppose a man has to make a living but this does not seem to be a proper defense of charging your fans money to support you when they are the reason you are where you are in the first place- sitting at a table and charging for the pleasure of you signature.

Perhaps I am being too harsh. I am told that most ex-superheroes, Star Wars cast and the entire crew of the Enterprise charge for autographs and photos at such events. Insert sad face here.

I wondered if I had attended Paris Fashion Week, would Karl Lagerfeldt expect me to pay 50 euros for his autograph? Wouldn’t the price of a Chanel jacket be enough for me to get him to sign the inside of the lapel?

So all of this make-believe had me wondering…. What does dressing up and getting your superhero’s autograph do for the psyche? Is there any evidence that shows that a fantasy world can heal the real one?

According to a recent study published in the British Medical Journal video games and fantasy worlds may in fact reduce depression in young people.

A total of 187 adolescents ages 12 to 19 who sought help for depressive symptoms but had no major risk of self-harm were enrolled, and 168 completed 3 months of follow-up.

The study looked at the effect of playing SPARX on depression scales in these teens who were diagnosed with depression but who did not express any warning signs of self harm. Subjects enrolled were randomized to either playing SPARX or to a control group who received regular care.

The game is set up as an interactive fantasy in which the user chooses an avatar that is charged with restoring balance in a word dominated by "gloomy negative automatic thoughts." Cognitive behavioral therapy is delivered during those challenges via a guide who puts the game into context, provides education, gauges mood, and sets and monitors real-life challenges.

The player typically spends 20 to 40 minutes on each of seven modules, delivered over 4 to 7 weeks.

The other group were given regular care which was in-person counseling delivered by trained counselors and clinical psychologists.

Overall the study, published online in the British Medical Journal on April 20, 2012 found that SPARX was as good  as treatment as usual.

The study found the effectiveness of SPARX wasn't related to sex, age, ethnicity, or setting, but participants who were more depressed at baseline had a significantly greater reduction in depression scores with SPARX than those who were less depressed.

There you have it my girlfriends… evidence that imagination may in fact heal the soul. Whether it is a SPARX video game, dressing up as Wonder Woman or just dressing up- we could all use a little fantasy in our lives. What better way to define one’s priorities than the pretend picture in our heads? Now that’s an image you can never put a price on.
Posted by Girlfriend's Guide to Health at 6:09 PM