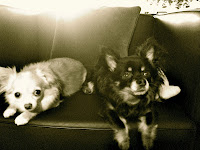 Have my girlfriends over 40 noticed that facial hair is like a petulant child? It disappears from where you want it and reappears where it is not welcome? I say this because I notice that my eyelashes really are thinner than they were a decade ago and well… the little hairs on my chin? Let’s not talk about them. Safe to say when I am 80, I’m hiring myself a “senior’s Nanny” to come to my house and pluck my chin hairs.

Perhaps I’ve been staring into too many of those unforgiving magnifying mirrors they have in hotel rooms or perhaps I am just a bit neurotic (yah, fine, whatever) but facial hair with me has become somewhat of a continental drift situation.

I used to have great eyelashes. I don’t mean to brag my girlfriends, but if you have them, bat them. When I was a kid I had these great long thick lashes. These of course came with a cost- as I also was blessed with one very large unibrow. Nonetheless, with the help of many an esthetician over the years, I’ve managed to separate my one eyebrow into two and until recently had some pretty decent lashes.

But last year I noticed that my eyelids were losing their luster. And so like any good cybersister with a Visa card and some connections I spoke with my Dermatologist friend about my options.

He suggested I try Latisse- an eye drop solution that was initially developed for glaucoma patients. Yes, like most ingenious medicines the “side effects”of this one were extreme eyelash growth. Don’t you just love a medication that was developed for one thing and sure enough its side effects make it appealing to a whole new market of people.

It certainly bring to mind Sildenafil (aka: Viagra). Recall my girlfriends that Viagra was initially developed as a medication for high blood pressure. Patients took the medicine to lower their blood pressure and found that there were other rising benefits instead. Incidentally- Sildenafil is a really shitty blood pressure medication but it is currently being used to also treat a disease called Pulmonary Hypertension.

I have taken Viagra once- no not for that girlfriends- get out of the gutter- I took it for High Altitude Pulmonary Edema at 19,000 feet while on Mount Kilimanjaro last year. (if you say this last sentence with an English accent it sounds far more adventurous)

So as you can imagine I had some experience of taking a medication designed for one thing but benefitting another. Viagra had been good to me above the earth’s atmosphere. Could Latisse be my new buddy at sea level?

Latisse first came to market in 2008 when the FDA approved it for use to help lengthen eyelashes. Be it known that this drug has been on the market to control the progression of glaucoma. It reduces the intraocular (in eye) pressure that causes glaucoma. People have been using this class of drugs known as ophthalmic prostaglandins for glaucoma for years and anectdotally found that the drug increase the density, length and diameter of eyelashes. Sure enough three large scale trial followed that confirmed this exact thing.

And in the spirit of free market the drug has now moved forward as an eyelash growing drug.

Settle with the judgement, my girlfriends…. This is not my gateway. I’m not going all Botox on you next. I do like the fact that this drug makes me bat my eyelashes with ease. Does it work you may ask? Holy shit yah. No this is not a commercial for the drug and no, my girlfriends don’t be taking this as medical advice but my lashes are pretty long. Several flight attendants on three separate flights just last week remarked on their length.

You know you have arrived when a flight attendant acknowledges your individuality.

So there you are my girlfriends, one grandmother’s glaucoma is a granddaughter’s eyelash bat. A different way of looking at the world through good pharmacotherapy. And with that I leave you for another week…. A little more enlightened and my work here is done.
Posted by Girlfriend's Guide to Health at 4:38 AM