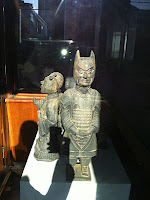 Pet peeve my cyber sisters. I officially hate people (yes, hate is perhaps too strong a word) who keep their blue tooth devices in their ears while they are doing anything BUT driving.

Let’s be clear about the blue tooth device- it was invented so that you could talk on the phone while driving, shopping, running and have your arms free for loftier pursuits. It was NOT meant to stay in your ear from dawn until dusk.

My colleague (you know who you are) keeps his in his ear all day long at work AND on weekends. He says it gives him a sense of comfort that he’ll never miss a call. WTF? Is this not what voicemail is for?

Are you really that important that you CAN NOT miss a call? Shit, I’m a doctor and I have voicemail.

I’ve seen photos of Barack Obama at work and play and he’s not wearing a fucking blue tooth. (sorry to my mother for the profanity- but I’m in a bit of a rage)

I understand if you are driving or moving about that holding a cell phone to your ear is neither safe nor practical. Hell, I have a blue tooth for my bike rides to work. In fact I often schedule conference calls during my rides to work. I do warn those on the end of the line that my heavy breathing is due to the ride up the Stanley Park Causeway and not to my excitement over taking their call. But the moment I reach my destination- the blue tooth comes out of my ear and the world is a new.

At this very moment I am at my usual café enjoying the best Americano Vancouver has to offer and sure enough some guy is sitting at the table next to me involved in a technological three way- with two other women AND a blue tooth in his ear.

Let’s be clear my girlfriends- I am writing this blog in order to distract myself from pulling the little piece of technology out this cyborg’s ear right now and yelling “shame on you, dude!”

About six months ago I met a man who did not have a cell phone. Yes they do exist and walk among us- it really was a trip. When I sarcastically asked him why he refused to join the new millennium, he looked down at the floor and said, “when I was younger I had a brain tumor removed and I’ve always been scared of the radiation”.

Yah. My cybersisters- I am officially an asshole. I apologized profusely there and then (and in two follow up emails) but I’m still an asshole- damage done.

In addition to making me wonder how I could possibly be such a wiener, I also took a moment to ponder his concern. What exactly is the radiation risk of a cell phone? Moreover, what is the radiation risk of a blue tooth device? Is it possible I should be a little more sensitive to the cyborg sitting next to me at the café as he will soon be stricken with a brain tumor in addition to his rude manners and need to take a call from his radiation oncologist at a moment’s notice?

Turns out- the cyborg has a lower risk of brain tumors than those of us who hold the phone at our ear moving about, holding it up the sky, yelling, “Can you hear me now?... Now? Can you hear me? What about now? “

In May, 2011, the World Health Organization announced officially that cell phones cause cancer. The judgment did not stem from new research, however. It turns out the WHO convened a panel of 31 scientists from 14 countries to review the scientific literature. The panel was put forth to itemize items on what I will call the “WHO Cancer list”. This is a list of items that have been deemed by the WHO to be carcinogenic. The list essentially classifies everything from coconut oil to DDT to HPV in terms of its ability to cause cancer. The list is graded according to the risk of the exposure and its ability to give you the “Big C”. Sure enough cell phone have now made it onto the list.

The evidence on cell phone use is sketchy at best.

A 13 country INTERPHONE study is the largest case-control trial done to date on cell phone use and cancer risk. It looked at 5000 people with gliomas and meningiomas (brain tumors) in the developing world and compared their behaviour with healthy age matched controls who did not have brain tumors. Overall the study found no link between frequency of calls or use of phones in the brain tumor group versus the non-brain tumor group. A large long term study followed 420,000 people in Denmark between 1982 and 2002 found similar results. There was an exception in both studies in that the group with the highest amount of cell phone use (greater than an hour a day) did have an increased risk of meningiomas.

According to an article published in JAMA in February, 2011 cell phone use of 30 minutes daily increases the risk of developing a glioma (a brain tumor) by 40% over 10 years. Now understand that gliomas are pretty rare to begin with. However when you are talking about a technology that 5 billion people are now using, the question of numbers becomes a little bit more important.

My conspiracy side of me thinks that there is no way we’ll see a randomized trial on cell phone use and brain tumors given the amount of money and technology at risk here.

Even if we do- I suspect none of us will care. I have an IPhone. I love my IPhone. I think I’m invincible on the best of days. Will I stop using my IPhone just to reduce my risk of getting a cancer that is pretty rare to begin with?

Here’s where a headset does come into play. The WHO has recommended head set and Bluetooth use to reduce the risk of radiation to the head. It turns out that a Bluetooth device emits 800 times less radiation than a cell phone. How does that translate into a reduced risk, science has yet to do the leg work….

In the meantime- here’s what I propose:

You know those lovely ear phones that allow you to listen to music AND take a call? Cyborg of the world- wire up. On the fashion front- you would look like just a dude listening to tunes as oppose to “7 OF 9” trying to get a message from the mother ship. On the cancer front- you may be reducing your risk of brain tumors.

Not a bad exchange if I do say so myself. My message for the week my cybersisters…. You don’t have to look ridiculous to lower your risk of a brain tumor- you heard it here first. Now go forth my girlfriends and spread the word.
Posted by Girlfriend's Guide to Health at 4:56 AM