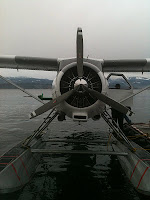 Last week I was on a little plane. When I say little- I mean 16 people, a captain and a copilot. I don’t even think you could consider the captain a real captain. First of all he looked like he was old enough to be my kid. I realize my girlfriends that this is a bit ageist but really- dude looked like he would have trouble mastering facial hair, let alone a Cessna.

Here’s my thing about the “little plane”. I am not particularly afraid to fly. My beloved as some of you will know from previous posts… is the perfect gentleman on the ground and the prefect psychopath at 30,000 feet. I hoverer, do travel so much that I have learned to accept that man really was meant to fly. If not and I have a moment of panic- I take 1 mg of Ativan and try my best to align my Chakras as the metal beast takes flight.

But I HATE little planes.

Here’s the thing… I never worry that a 747 is going to fall from the heavens. How often does that happen? Once every 3-4 years? Really? When’s the last time we heard about a REALLY big plane crashing into a farmer’s field? It’s just not commonplace.

Little planes- another story. You don’t hear about little plane crashing very often either. WHY? Because they are little.

If I’m going to die in a plane crash I want it to make CNN. I want a four-page nation newspaper spread. I’m not going down in some bullshit tin can that makes the 6 o’clock local news ONCE and is forgotten until an inquiry appears 8 months later on page 6 of the local newspaper.

No, my girlfriends… I am a plane crash snob. If I must… I am going down in a blaze of glory and Anderson Cooper will mourn my loss- personally. Bring flowers Anderson- I like white ones.

There I was on the little bullshit plane. Ativan safely under my tongue when the co-pilot walked down the isle to give the woman behind me a safety briefing on the use of the emergency exit.

Here’s what I want to know…. How many people sitting in those exits on any given plane could really operate the damn thing?

Me? I work out. I can bench press with the best of them. My cardio is impressive. Never mind the mountain or the cross-country bike ride… I can carry three boxes of shoes and countless Barneys bags 18 blocks in NYC in a snowstorm. I can handle throwing a door out of a plane when my adrenaline is at full tilt.

At least I think I can…

But I can’t help but size up the woman sitting behind me and wonder what her upper body strength is? Could she rise to the occasion? Will we all help her out in the event she can’t “throw the door towards the rear of the plane and exit safely off the wing”? Will it rally matter at that point considering we will in fact be plummeting towards earth with gravity laughing her ass off?

Here’s the evidence…. According to the TSA website, the average emergency exit door weights between 30 and 40 pounds. My estimation is this is the same weight as a medium size suitcase fully packed. That is to say if the suitcase is German engineered carbon fibre and you don’t have more than 3 pairs of shoes in it. Yes, my girlfriends, I do travel with a Rimowa (fabulous line of luggage, light as a feather) but needless to say Mama likes her Manolos. So easily my suitcase can weigh 40 pounds without a thought.

Now here’s the test…. Step 1- pack your suitcase and make sure it weighs 30-40 pounds. Step 2- lift dais suitcase to shoulder height. Step 3- throw it 30 feet. Can you do it? If so… feel free to sit at my emergency exit.

Now I realize that in the event of said emergency maybe others on the plane will help out. However, lately I’ve noticed people don’t even open regular doors for me so why should I expect them to open emergency ones?

According to airlinesafety.com (which my sources tell me is THE place to go for airline safety info) there are two kinds of over wing emergency exits. This excludes the full size door found on a Boeing 747 or airplane of that size.

The first is called a DISPOSABLE HATCH type exit. This is the most common. This is the very 40 pounds door that you must “lift and separate” from the plane.

The second is on Boeing 737 airplanes and next generation planes and is a SELF DISPOSING HATCH. You simply pull down on a handle and this initiates the exit’s self- opening mechanism whereby the door rotates up and out all on its own. If it does not work during an emergency? Yes, you are fucked.

So back to my situation where Grandma Mary Francis all 80 pounds of her must be trusted to lift a door/suitcase half her weight?

A study conducted by the Department of Human Factors and Air Transport, Cranfield University, Bedfordshire, showed that in depth visual and personal briefing on use of an emergency exit improved reaction times of passengers operating an ext strategy on a Boeing 737. The study, conducted in 2001 surveyed 7 groups of passengers traveling on Boeing 737’s. The study examined their reaction times (on the ground) operating the emergency exits after having No Briefing, a brief explanation (a written pamphlet) and a detailed 3-minute explanation along with a visual demonstration. After having no briefing the average reaction time of the passengers was 7.7 seconds. After having a detailed briefing it was 2.9 seconds. This was the time it took passengers to get to the exits…. NOT OPEN THEM.

Further research funded by Transport Canada involved running a series of large group evacuation trials using the Boeing 737 cabin simulator. Groups of up to 48 participants were recruited to evacuate the cabin through the Type III exit. In all trials, a member of cabin crew was located at each end of the cabin. In half of these trials, a third member of cabin crew was located in the seat behind the Type III exit operator. In these conditions, the additional cabin crewmember provided instruction to the exit operator on the call to evacuate. This instruction included a command to open the exit, and commands on how to open the exit and dispose of the hatch. All of the trials were filmed on video.

As for the ability of passengers to open the door correctly? The study makes no mention….


Back to me on my tiny plane with no cabin crew for supervision and a woman with no upper body strength? Yes dear girlfriends… I am, shall we say, screwed.

Hey, I’m all for the kindness of stranger…. However, should the situation arise where I must rely on the upper body strength of strangers? What will I do in the face of this riddle? I will do what any good girlfriend does when she wants something done properly… I will do it myself.
Posted by Girlfriend's Guide to Health at 4:51 AM