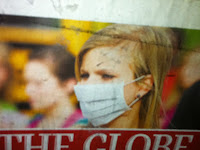 Perhaps I am grasping dramatic this week dear cybersisters, but I am currently fully vaccinated. Yes my girlfriends, it’s flu season and as a healthcare provider I do like to give my immune system every added advantage possible.

And so last week, I rolled up my sleeve and took one for the herd. Currently no significant side effects. Perhaps a little sore throat, but that could be from spending a week talking my ass off and hoping the world might listen. Other than that, my arm hurts. To be more specific, medically speaking, my left deltoid is tender.

I should state my bias (what has ever stopped me before?) in that I am a fan of vaccinations. As someone who has spent the last few decades surrounded by diseases I have always thought that preventing them was a rather happy concept.

Times were different when I was a kid. My parents were the polio generation. They had all too vivid memories of a school friend or neighbour who wound up contracting the illness. My parents came of age when Jonas Salk revolutionized the way we look at diseases.

Infections were no longer messes to clean up after. No longer did we hope and pray…. We vaccinated.

Then came Jenny McCarthy and her brilliance/bullshit and the waters were muddied once more. Make no mistake- I welcome the dialogue. I think it’s important that people know risks and benefits when it comes to diseases… but really- should Jenny McCarthy really be the voice of reason?

When I was a kid- you vaccinated your kids. Measles, Mumps, Rubella? You got your shot. Hell my pediatrician had to chase me under the table at his office just to give me the damn thing. Sure, I screamed like a girl. I kicked and even had a tantrum (yes, girlfriends… a true feet stomping tantrum). But I got my shot. I of course got to go out for ice cream afterward as well as payment for my shot. Incidentally, I really thank my mother for encouraging this aspect of my emotional eating and teaching me that yes, blue licorice ice cream really can dull any pain.

When I was a kid- we did not have the vaccine for Chicken Pox and as such- my mother did the next best thing. Any time she heard that a neighbour’s kid had contracted the disease- she sent us over to play with them. This was my mother’s way of ensuring we’d get exposure to the virus at a young enough age so as to protect us when we were older. You see perhaps my mother knew that chicken pox in kids is a rather benign nuisance of an illness (in the majority of cases) compared to contracting the virus as an adult when the disease can be quite severe.

This is of course only a generalization and in fact chicken pox can be a severe illness in kids- but hey- it was the seventies- parents dressed their kids in courdoroy and poleyester. They left their kids with the 14 year old neighbour as a babysitter. There were some numbers on the kitchen table and 10 dollars for pizza. Parents in the 70’s fed their kids formula you bought at the grocery store and said things like “I’ll give you something to cry about”. They really were doing their best before the Baby Bjorn generation came about and told them how shitty their parenting skills were.

And so decades later- here I am relatively unscathed. I have grown up to be a rather well adjusted adult. Should you have a different opinion on this… please feel free to post your comments and I will promptly delete them.

I will however state it plain…. I’m all for vaccinations. If there is a shot that prevents small pox (and there is) BRING IT ON. I can’t help but think that if only we had a vaccine to prevent the big guns like cancer, heart disease, bad manners and unwanted facial hair?

When it comes to the flu- it turns out that it really is a big deal. It’s estimated that 30,000 Canadians die each year as a result of Influenza. The first influenza epidemic occurred in 1580. Since then scientists have been working their asses off to figure out what caused it. In 1930 it was discovered that influenza was caused by a virus in the ORTHOMYXOVIRIDAE family.

In 1931 Ernest Goodpasture and his colleagues at Vanderbilt University grew the first influenza viral culture in embryonated hens’ eggs. This work lead to the development of the first flu vaccine in the late 1930’s. In 1940 the US military approved their use and they were used in the WWII.

Today’s vaccines are dramatically safer and more refined than those used 50 years ago. In February of every year, Public Health authorities, epidemiologists and molecular virologist look at the three most common Influenza strains from the preceding year. They make their recommendations according to which viruses were most common in their country. In Canada, we rely on Health Canada and the CDC in the U.S.A for these recommendations. These viruses are then ennoculated and grown in fertilized chicken eggs.

The 2011 Influenza vaccine also contains the H1N1 vaccine in addition to the three most common influenza strains from last year.

As of 2009, there were 70 clinical trials on the use of the influenza vaccine.
Realize that most of this science is targeted at the elderly who are in fact at highest risk of dying from the flu.

According to a 2006 Cochrane review, in a non-pandemic year, a person in the United States aged 50–64 is nearly ten times more likely to die an influenza-associated death than a younger person.

However, it is unlikely that the vaccine completely explains the results since you could make the argument that elderly people who get vaccinated are probably more healthy and health-conscious than those who do not.
That being said- nothing is perfect- Just ask my eye concealer. Things let you down all the time.

We do our best in life dear girlfriends. I am still under 65 year old… tick tock. But I do care for those most vulnerable to the influenza virus and let’s be frank- I have to take an ativan just to have my hair done…. Three days in bed with the flu would pretty much kill my spirit more than anything.

So…. Here I am… fully inoculated while my immune system is as busy as the shoe department at Barney’s.

Nothing in life is guaranteed my dear cybersisters… but just as I do with my Visa card limit and the upcoming spring lines…. I try my best to hope for the best and sometimes just BELIEVE.
Posted by Girlfriend's Guide to Health at 4:49 AM