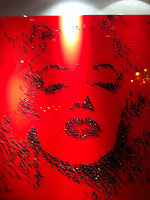 Yes, I have been to the Dentist. I do try and go every six months for a good cleaning and check up. Unfortunately as my lovely Dentist will attest to- I suck at keeping appointments. I am forever changing and rescheduling. It’s not that my teeth aren’t a priority…. They are. It’s just… well… I suck at the self maintenance thing.

Here’s the deal… between the hair root touch up every six weeks, the hair cuts every 8 weeks and the eyebrow groom (don’t poke fun- have you seen my brows?) every 3 months…. I’m tapped out. Factor in a routine medial exam annually along with time for fasting blood work (I hate going without the coffee in the morning) and I’m fully booked. Then my bike needs a tune up every 6 weeks. Along with all the other duties a girlfriends gotta do and I’m locked up. After a while, the dentist becomes an after thought.

But here’s the thing…. My gums are receding. No shit…. I kid you not. I have spent a lifetime trying to make every other part of my body look smaller (my hair, my uni brow, my ass) and here I am finally getting my shrinking wish. MOTHERFUNHOUSE. What is that? Is God now a girlfriend with shitty cell phone reception.

There I was a hefty little kid lying in bed praying to the goddess for a smaller waist size… Did she finally get the message all these years later only to screw it up? I said BUM God damn it NOT GUMS? What is that?

Yet here I am being told that I have “pockets” between where my teeth should be.

This is not the first time I have heard such news…. When I was in my twenties I had to see a periodontist who did some God Awful gum work surgery on me (the surgery I am sure was excellent- it was god awful in that it was truly unpleasant) because I am told that I have small gums to begin with.

According to a study published in the American Journal of Orthodontics and Dentofacial Orthopedics in 2008, gingival recession (fancy words for gum shrinkage) is actually quite common. Approximately 15% of young people presenting to a dentist’s office for routine exam have it. It is most commonly related to previous orthodontic treatment or oral piercing.

This study looked at risk factors for gingival recession in a young healhy Israeli population. Of the 303 people randomly selected the most common risks for recession included age and whether or not the subjects had had braces. The average age of people in this study was 32.

There was no correlation in the study between smoking habits or gingivitis and gum recession.

An older population studied in Turkey of 831 people with an average age of 52 showed a much higher rate of gingival recession.

The average rate of recession was 78.2% in this population. The study involved a statistical model that looked at a multiple regression analysis to look at what risk factors contribute to gingival recession. The analysis showed that age, smoking duration and traumatic toothbrushing increased risk of gum shrinkage. Gingival recession has also been linked to a high frenum. ANATOMY ALERT Girlfriends… a frenum is that ridge between your two front teeth that connects your gums to your upper lip.

So there you have it. I’m getting older and maybe I’m brushing a little too hard… either way… one day I will have to have plastic surgery on my… gums. No breast implants, no facial fillers…. Just a small intimate gum enhancement.

Life has a fabulous sense of humor. Doesn’t it my sisters? Have a fabulous week and don’t forget to floss… be good to your gums my girlfriends. You never know when they will disappear on you.
Posted by Girlfriend's Guide to Health at 4:11 AM