Be Still My Heart 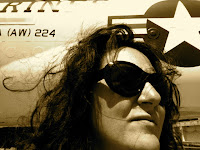 Do you remember dear girlfriends what it is like to sit still? I don’t mean sitting in a movie or on a plane to some far away fabulous place. I mean the kind of sitting still we did back in high school or university where we sat and paid attention while our brains were little sponges.

I ask this because I have found myself sitting in a lot of meetings these days and I may have in fact diagnosed myself with Attention Deficit.

Sitting has always been a challenge for me.

Even a movie or poolside or heaven provide front row at New York Fashion week.

I am talking about sitting still in a lecture hall lights dimmed in a suit and heels trying to maintain consciousness while a POWERPOINT presentation flashes on the screen and a man (or a surprisingly masculine woman) explains the intricacies of human physiology and what happens when body parts give up the good fight.

I have seen more blue power point slides in the month of June than Steve Jobs ever thought possible.

Let me break it down for you….. I am good for about an hour. I start fresh, coffee in hand; suit crisp and reading glasses demurely perched on my nose.

Sixty minutes later, my coffee needs refilling and my glasses have smudges that won’t go away with a simple breath of air and tablecloth sweep. I am now beginning to fidget. I check my nails. I inspect my cuticles and I readjust whatever rings I have on.

Ninety minutes in… I have to pee, my brain is shutting down and I have turned my attention to the Vanity Fair magazine I brought as a back up plan of good measure.

One hundred minutes down and my stomach is growling, my bladder is bursting and my skirt is wrinkles. I am shifting in my seat like an eight year old in church. My VF magazine is long gone with my attention and I scope out the room to see that most people are in various stages of attention decay.

I marvel at those people who are still sitting erect, perched at the ends of their seat wrapped up in it all as if things only have just begun.

By two hours in I’d sell my mother for a “refreshment break” and I am now scouting out the exit signs like an FBI agent.

Up on the podium, the speaker, Dr SMARTY-PANTS is talking about a mouse that was genetically engineered to not make insulin.

He is speaking English and I went to Medical School. My IQ is pretty respectable and I have a decade and a half of scientific training. But as of this minute…. I AM DONE. He might as well been lecturing in Greek and I might as well be a Playboy Bunny.

I don’t mean to “diss” the Bunnies but let’s be honest…. Playboy University has a different set of entry criteria.

Needless to say… the knowledge is no longer happening. I am trying to focus and get my head in the game, but I am lost. I pull out some paper and a pen and start making lists of things to do today,

I’ve gone from fabulous scientific to crispy fried brain in the span of 150 minutes.

What happened? If I do the math, I used to be good at sitting in lectures. Between grades one and twelve I spent a lot of time sitting on my ass brain engaged, eyes wide opened.

I’ve spent decades sitting filling up my brain studying for love and loyalties and now I can’t make it past 90 minutes without a distraction and some pretty pictures in a magazine.

Turns out there are two different types of what is referred to as attention span. The first, called FOCUSED ATTENTION is a short-term response to any stimulus that attracts attention. It is usually very brief with a maximum span of about 8-10 seconds. This is often thought of as a distraction- a ringing telephone or a car horn that grabs a person’s attention and requires a specific response.

The second type of attention is SUSTAINED ATTENTION. This is a level of attention that requires a consistent attention over a period of time.

Most adults last about 20 minutes although they can choose to repeatedly focus on the same thing. This is referred to as an ability to renew attention and usually allows people to “pay attention” to things that last for longer than the 20 minutes at hand.

A study of 2600 children showed that early exposure to television decreases a child’s attention span later in development. Neil Postman, in his book, Amusing Ourselves to Death comments how the Internet has contributed to a decline in our attention spans.

UCLA professor, Gary Small used an MRI scan to observe the brain activity of six volunteers, three web veterans and three who had rarely used the Internet. The professor found that veteran web users had developed "distinctive neural pathways” that were not found among the non-web users. These same neural pathways are linked to attention span and task oriented behaviour.

Blame it on the Sesame Street I watched as a kid or blame it on the Internet sites I use as an adult…. My attention is waning and my neural pathways are blazing a new frontier.

Am I worried? I have learned dear girlfriends that the world can be a big scary place if you pay too much attention…. As luck would have it that I can’t sit still long enough to be really afraid.
Posted by Girlfriend's Guide to Health at 4:24 AM