A Nail in the Coffin 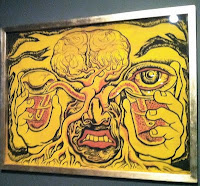 I’ve been polishing my nails lot lately dear girlfriends. Yes, this is trivial…. But really, I ask you… will this blog change the world? Really? Settle down. I know social media is the new way of the future and hell- it has brought democracy to the masses and freedom to the future… blah, blah, blah. It’s a blog, cybersisters- settle down.

So here I am polishing my nails lately. It is something I do often in order to prevent their biting that is one of my last vestiges of a bad habit.

I find that polishing my nails has allowed me to add a new accessory to my outfit.

I had a mentor in medical school who truly was and still remains- my hero. Her name was “Dr. C.B.” and she was first and foremost a “kick ass lady”. She had brains the size of which one rarely sees in a lifetime. Equally matched was her sense of compassion. Finally- she had a pair of proverbial balls that were bigger than the shoe department at Bergdorf’s.

This woman was something.

Even better- she had great style. Her fashion sense was a “bit out there” but she pulled it off perfectly. She wore these amazing 1980’s inspired outfits with fabulous shoulder pads and matching nail polish.

Every week she would have her nails painted in one artistic form or another and would wear outfits colour coordinated for that week based on the weekly nail art.

For those of you reading this blog who don’t know who Alexis Carrington is…. Dynasty, my little sisters- look it up.

Dr. CB. combined a sense of fashion with a brilliant mind and a moxy and she was my idol- hands down. She was the medical equivalent of Katherine Hepburn.

Now many years later- I try and emulate her in my daily clinical life. I try my best to be a good clinician and to use my brain as often as possible.

I don’t wear much 80’s inspired suits but I like to think that I believe in fashion as much as the next self-respecting diva.

Finally- I do paint my nails. Not like Dr. CB- I tend to prefer a “do it yourself” job. But they do get a polish at least once or twice a week.

Last week I discovered formaldehyde free polish by a new company called “Butter London”. This is not a plug for Butter London. I have no idea whether nail polish should have formaldehyde or not. I mean I do put my polished nails in my mouth from time to time but is formaldehyde in nail polish the same thing as led in paint? Should I be worried? Should there be a recall?

I’m sure Dr. C.B did not use formaldehyde free nail polish and she certainly seemed to have all of her functions in tact at all times.

Since those many years ago, I have learned a lot about the medical profession and even more about the polishing of nails.
Nail polish first came of age during the time of the pharaohs when Egyptians wore painted nails to signify status.

Nail polish is actually composed of a chemical called nitrocellulose – which is also used in film processing and in making explosives. Nitrocellulose is dissolved in a solvent such as ethyl acetate and pigments are added. The basic components of nail polish are a resin to make the substance hard and a film forming agent to make it coat. Polish is also composed of a plasticizer, a solvent to keep all the chemicals in liquid form, a colouring agent and an adhesive polymer to ensure that my damn nails don’t look like shit two days after a polish. Attention CHANEL nailpolish… pay attention.

I’m off on a rant dear girlfriends… but CHANEL is French for “chips in 24 hours”.

Dibutyl Phthalate (aka: DBP) is one such plasticizer that first came to market in the 1930’s. It is made from polyvinyl chloride and is found in the coatings of medications as well as nail polish. It is know to give polish its longevity.

And although my balls are quite big, safe to say this is the one cancer that I am not personally afraid of. Interestingly the testicular cancer of which I speak has been shown to be in the sons born to mothers both rat and human with high exposure to DBP.

A Study published in 2008 in the Journal of Occupational Health was designed to measure a manicurist’s exposure to DBP and risk to their health.

Forty manicurists submitted to urine testing pre and post shift to determine their exposure to DBP during their workday.

Turns out there was a statistically significant increase in their urine concentrations of the metabolites of DBP compared to those Manicurists who wore gloves during the shift.
Should I be concerned? I don’t have testicles, I am not a rat (no comment peanut gallery) and I am currently not planning on growing a boy inside me.

Turns out the cosmetic industry will provide.

In 2006, several cosmetic companies took DBP out of their products as well as formaldehyde. Many of them even moved to water based nail polish.

This explains why over the last five years I’ve noticed that my self made manicures look like Lindsey Lohan after 3 days and I am forced to chose “chip friendly” colours these days or else I must change polish every two days.

Again my dear girlfriends… we slave and we suffer- our hands look fabulous but we must endure in silence. Now if you will excuse me… those bastards at Chanel have come out with a new colour that is harder to get than good service at a Starbucks. My toes are calling and I must respond. Paint on my sisters, in the name of the pharaohs… paint on.
Posted by Girlfriend's Guide to Health at 4:55 AM