Tequila Sunrise and the Silicone Valley 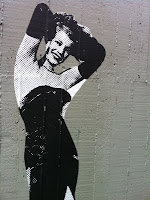 Greetings from San Diego dear girlfriends.I find myself on a little “business” jaunt in an attempt to make myself a little smarter and pick up some sun and sandals. I attended the annual meeting of the American Diabetes Association and after almost a week of sun, poolside and yes, diabetes education, a good time was most definitely had by all.

San Diego does have a Barney’s and yes, I managed to visit the mother ship in between meetings. One does need to expand one’s wardrobe along with one’s scientific consciousness, no?

A fabulous meeting overall. My skin is darker and my brain is bigger.

I stayed at the Hard Rock Hotel and they were kind enough to upgrade me to a suite which overlooked the pool. The goddess shined upon me even more, when I found THE pair of shorter Jimmy Choo motorcycle boots which really do make me feel complete as a person.

To top this all off…. The Norma Kamali bathing suit I had ordered in Vancouver over the Internet from New York City days before was delivered to my room in San Diego and waiting for me when I checked in. The Secretary of State could learn a thing or two from my international shopping finesse.

I checked in and decided to tour the gas lamp district and explore. I met a lovely man called Manny at the local wine shop who gave me a lesson in tequila along with a taste test. As my cybersisters will recall, my liver is not my best feature and so, three sips in and I was sufficiently buzzed. I decided to use my liquid courage for good and returned to the hotel pool with enough courage to don my newly arrived NYC bathing suit and challenge my melanocytes to darken or die.

There I sat poolside in a bikini feeling far too confident for the size of my bottom. Incidently, a tequila tasting rally is the most effective way to feel ridiculously good about oneself while in a bikini.

Make no mistake- I’ve spent a lot of time in a gyms, on bicycles and in pools and have ran more miles than I can safely recall…. Sisters…. I have a relatively healthy sense of self esteem to begin ith. I know I will never have a 20 year old’s perfect body- and I ma actually good with that. I like being as healthy as I am.

I easily spend 2-3 hours a day on a bicycle and can hold my own on any run or ride.

That being said, 10 minutes at a tequila tasting did more for my sense of self in a bikini than years of physical training, nutrition and self talk. Manny’s magic potions put me poolside in a bikini with enough Moxy to last me all day. In my mind… I was Gisele Bunchen with a medical degree.

There I was poolside at the Hard Rock Hotel people watching when my next blog idea literally jumped out at me from beneath the agave hum.

No judgement here, girlfriends… just the topic for my next blog… YAY!

The Food and Drug Administration on June 22, 2011 released a position paper stating that although Silicone breast implants are safe, but some will likely need to be replaced within 10 years.

According to the FDA 20% of all silicone implants will need to be replaced within a decade. That number rises to about 40% when the implants are placed for reconstructive purposes following mastectomy.

As far as the history of implants goes, some of my girlfriends will recall that silicone breast implants fell out of favour in the early 1990’s when concern arose over their rupture. From 1992-2006 silicone implants were banned in North America.

In 2006, the FDA released a position paper advocating their safety and once again women could rest easy knowing that their implants would not kill them.

According to the FDA 20% of silicone implants will need to be removed due to complications with their insertion. The FDA has also identified a slight increase in the risk of lymphoma in the breast in association with silicone implants.

The FDA has identified 60 cases of cancer out of 5 million to 10 million women who have the breast implants worldwide. That cancer, called anaplastic large-cell lymphoma, normally occurs in the breast in only 3 in 100 million women, so the dozens of extra cases raised red flags.

This new FDA data comes from manufacturer follow-up studies involving 40,000 women. This data was required by the FDA in order for the manufacturer’s to get approval for two new implants in 2006.

The implants, manufactured by Allergan and Mentor Worldwide, were approved for augmentation in women over age 22 and for breast cancer patients of all ages.

Silicone implants have a softer feel than saline and were once the agent of choice for breast implants.

In 2010 half of women receiving breast implants had silicone and the other half had saline.
Here I was poolside in Silicone Valley. I wondered how many women would need to upgrade their cleavage in a decade or so….

I sat back and let the sun wash over me. I let the tequila continue its effects and I took comfort that in 10 years time my although my “girls” would be small and real and the only thing I would need to replace would be the Jimmy Choo motorcycle boots I had bought earlier at Neiman’s.
Posted by Girlfriend's Guide to Health at 4:53 AM