When You Only Have A Hundred Year to Live.... 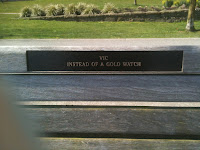 I went to my first 100th birthday party last weekend. Yes, my sisters- it was a lovely affair. There was family and friends and festivities as my grandfather hit the big 1-0-0. I put on my Saturday best and endured a round of questions from my mother’s contemporaries regarding how it was that I “could walk in such heels?”. Amidst it all I smiled and responded with the confidence of a woman who was born to her Louboutins and said, “I do just fine thanks…”

There he was… my husband’s greatest gift to me in our marriage apart from his lovely demeanor, Zaidie as we all call him in his century old splendor. And I do mean splendor- the man lives by himself in an apartment takes no medication and has all his own teeth. He is truly kick ass.

Sadie was best man at our wedding 14 years ago and I can still recall in my mind’s eye the day we took him to rent a tuxedo for the occasion. There he stood in the store, shirtless and trying on a variety of styles. I kid you not- the man had abs- a true six-pack…. At age 86. Marvelous.

Now 14 years later he stood in a room full of people eating cake and dancing like he was a kid…. Okay, a kid who can’t hear or see very well… but a kid. We all stood there in amazement and I could not help but wonder- What does it take to make it to one hundred?

Curiously, my blog turns one hundred this week. Yes 100 blogs ago Girlfriend’s Guide To Health decided it had something to say.

For a woman who can never commit to a nail polish colour for longer than three days this is true consistency. I change my mind as quickly as I change my heels. TO stick it out for 100 scientifically based earth shattering commentaries on the state of the female union is truly a sign of growth for me. Perhaps I am mellowing in my old age?

But if I am going to make it to a century of years in a similar graceful fashion as this blog has done over the last few years…. The evidence would suggest I need to cover a few key elements:

1. I need to start menopause after age 52. According to several studies, women who go through menopause later in life have greater longevity. Is this because we are bitchier for less time? No. Estrogen and Progesterone clearly have a cardiovascular and cancer protective mechanism that offers a greater life protection to women if they go though menopause later in life.
2. I need to make every calorie Count:
Researchers in St. Louis reported that men and women who limited their daily calories to 1,400 to 2,000 (about 25 percent fewer calories than those who followed a typical 2,000-to 3,000-calorie Western diet) were literally young at heart — their hearts functioned like those of people 15 years younger. "It's about not just eating less but getting the most nutrition per calorie," says study author Luigi Fontana, MD, PhD, associate professor of medicine at Washington University School of Medicine. Study subjects stuck to vegetables, whole grains, fat-free milk, and lean meat and nixed white bread, soda, and candy. If you cut empty calories and eat more nutrient-rich foods, your health will improve, says Fontana.

Okay- I can cut calories- Hell, I’ve been dieting for decades….

3. I Need to have had a baby later in life: If you got pregnant naturally after age 44, you're about 15 percent less likely to die during any year after age 50 than your friends who had their babies before age 40, reports a recent University of Utah study.

Not going to happen. I would rather die young than breed just to live. Sorry if this is disturbing… this is just me.

4. I need to have a (relatively) flat belly after menopause  Women who are too round in the middle are 20 percent more likely to die sooner (even if their body mass index is normal), according to a National Institute on Aging study. At midlife, it takes more effort to keep waists trim because shifting hormones cause most extra weight to settle in the middle. A target waist here is lest tan 35 inches.

I took out a measuring tape and thankfully … I am measuring in at 31 inches… I fell so much better about not getting pregnant.

SO there is just 4 things among 20 I might add that are amongst e list of what can make us live to 100. Given this is special occasion- perhaps I will make this blog a two party.

Happy 100 my sisters. Thanks for your Tuesday tune in over the last 1-0-0 I feel like a giddy girl celebrating a milestone…. Now what dress to wear?
Posted by Girlfriend's Guide to Health at 5:28 AM