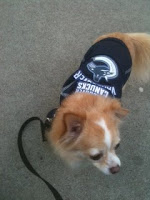 There is no mistaking it my dear girlfriends… we all need a cheering squad. Yes, it is hockey playoff season at present and Vancouver has made it into the Western conference finals.

I realize I sound very “up” on this issue, when in fact I am well beyond my depth. Shamefully- I am NOT a hockey fan. Sure right now I am caught up in the Canuck Fever and am cheering on my home team for God and Country. But, sadly- I have no understanding of the game. Besides- getting me to sit still for 3 periods really is a feat in itself and a reason I suspect why beer is an integral part of game watching to begin with.

Here’s my theory about the whole hockey thing… it comes down to the uniform. I am a true football fan- both American and European varieties (ie: soccer). I love a good baseball game when it is live and I am sitting in the stands. Hockey, however, never made my sportsman cut and I can’t help but think it comes down to a question of outfits.

Football uniforms are pretty hot. The tights and the pads and the whole outline of the body- big shoulders, little waist. Soccer uniforms? Who doesn’t love a frighteningly fit man in shorts and a jersey?

Hockey however, is an entirely different story. Hockey involves a frumpy set of pads, some ill-fitting shorts and a jersey one could swim in. Put on a helmet or a face mask and you are pretty much screwed from a visual standpoint. There are even the negative references to things like “hockey hair” that have become a slang form of ridicule.

The uniform for hockey does nothing for its model that, and the shoes are totally impractical. The only place you can wear ice skates is on the ice. Enough said.

That being said, my girlfriends know how much I LOVE Vancouver…. And here is MY city all caught up in a cheering frenzy for its team. And so I am on board…. I bought a lovely Canucks Jersey and the perfect pair of blue pumps to match. Amidst my shopping/ civil duty, I could not help but wonder what that kind of support really mean to an athlete?

As one who considers herself a bit of an athlete – yes I am a bit of an jock…. A really sparkly jock nonetheless… I know the importance of having a cheering squad.

In fact I have hired one…. My trainer Mike Veino (long may he reign) is a superhero among men who once a week (twice if scheduling allows) rides the perfect balance between giving me shit and cheering me on.

As a result, almost ten months later, I have much less wobbly bits than I used to and I can do twenty REAL pushups at a moments notice. I’m not joking- if you ever run into me on the streets- ask me to demonstrate and I promise I will drop and give you twenty.

Mike is MY cheering squad in addition to being incredibly skilled at shaping me up for the seemingly maddening new physical adventures I seem to be taking on lately.

It turns out; science has my back as well….

Studies show that 80% of obese women have tried at least 3 commercial diet programs in the last two years and almost 90% of them never pursue the program for longer than 3 months. If you can make it past the first 3 months…. You may have something. When I do my math, I’ve been dieting for a decade. Statistically speaking- I should be good to go.

A large-scale trial published out of Italy called the QUOVADIS trial in 2005 in JAMA showed that the most successful patients in a weight loss program had the following predictors in common:

1. They had all set realistic weight loss goals. These were people who did not set 100-pound goals as their ultimate challenge. They made a decision to take it one step at a time- setting a small goal, a realistic and achievable goal that would eventually be a stepping-stone to many others.
2. They had a good support system- be a friend or a physician or a counselor who was cheering them on
3. They had a good rapport with that support system.

Turns out- Italy not only leads the world in luxury footwear it also has something to teach about establishing a cheering squad.

So whether I am a hockey player in a uniform that does nothing for me or an Obesity survivor who has lost a Backstreet boy and continues to search for the perfect outfit….

We all need a little encouragement as we make our way in this world… someone who stands on the sidelines of our lives yelling and cheering and waving our flag. Without that we are playing to an empty crowd in more ways than one.

Off you go my girlfriends… into the brave world for yet another week… allow me to get sentimental for but a moment when I say… Should you fall on your heels and need a word of encouragement to get you back on track….

Look up into the proverbial stands and there I will be, my cybersisters… in a fabulous silk jersey with your name blazed on it yelling “GO GIRLFRIEND, GO”…
Posted by Girlfriend's Guide to Health at 4:17 AM