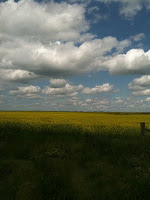 My dear girlfriends. I do believe in choice. Fat free, Non fat. Americano. Pump, stiletto or platform. Flats (heaven forbid) and boots. A woman really has a right to choose.

So here I am a good old Canadian chick left without an option. You see our elections are here and well… quite frankly the choice for prime minister is about as bleak as the half off bin at Barney’s three weeks after an end of season sale.

Let’s be frank. It may surprise some of my cybersisters given my love of the label- but I’m a socialist. I know. Shocker. A socialist? Really? Yes… perhaps the really sparkly kind but yes, a socialist nonetheless. I do believe in the working man (and woman). I do support the unions and I love me a good set of social programs. I think we all have the right to earn a fare wage for a job well done.

The world runs better when people give a shit about each other and take care of those less fortunate.

Make no mistake- dare I say it- I don’t necessarily believe we are all equal and should all have the same things…. What is the fun in that? What’s the point of my Louboutin collection if a bunch of 18-year-old girls can’t covet it?

Yes, my girlfriends, I know the rules… never discuss religion or politics. But in my world rules are guidelines made for those of us who need an opinion. I have been blessed with enough opinions to match any outfit. And thus, rules be damned.

Yes, I know my cybersisters…. This blog is always a bit flippant and I have spent many a week trying to keep it light and “science-eee” without bringing my cybersisters down. But I think it is time to discuss the fact that the much of the world is in turmoil over the right to choose.

I’ve long maintained that choice is one of humanity’s greatest characteristics. Our world does better when we have the right to choose- whether it is a leader, a way of life or statement necklace, a girlfriend really does have the right to make a decision and of course change that decision at any moment.

When I was a little girl I remember my Dad telling me about how his father (my grandfather) fought in both World War I and World War II for the right to be free. At the time, I was oblivious to the concept. Freedom is a challenge to understand when your bedtime is 7:30pm. That being said, I grew up knowing that democracy was something.

My parents were people who instilled in us the power of personal choice. Election time in our house was an occasion. My parents always took me to the voting booth with them. I remember being allowed in the little black booth and watching my father make his democratic choice.

No years later, I donned my democratic Monday best (Brian Atwood Pumps and a fabulous Dries summer dress) and went down to the voting station to exercise my inalienable right….. My father and the fashion goddess would be proud.

Turns out Democracy is not just good for the soul…. It benefits the body as well.

A study published in December, 2004 in the British Medical Journal examined the benefit of FREEDOM on the health of citizens around the world.

These results did not change after a country's wealth, level of inequity, and the size of its public sector were taken into account.

The underlying mechanisms for this association are still unknown, but the authors suggest that democracies allow for more space for social networks and pressure groups, opportunities for empowerment, better access to information, and better recognition by government of people's needs.

Another study published out of Australia from 2002 in the Journal of Epidemiology and Community Health showed an increased rate of suicide when the Conservative Party (right wing) was in power versus when Labour party was in power (left wing).

Interesting? What have we learned? Well… we’ve learned that now freedom has a scoring system and some geeks will study ANYTHING to look for a pattern.

My sisters…. I’m not sure there is anything to read into here but the fact of the matter is…. Yesterday I exercised my democratic right to pick a leader (Goddess help me) and today I will live with the consequences.

Call it a flawed system, call it a profound statement or just call it an idealistic notion. Sure there are holes in the system. But just like Fall of 2006 when miniskirts became mainstream… I just hold my own and wait for another few years and a better option. That, my cybersisters is real FREEDOM.
Posted by Girlfriend's Guide to Health at 4:32 AM