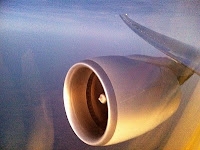 A little girl sat down next to me on a plane last week. She was 16 months old, I later learned from her naturally proud mother (who incidentally told me later- she thought her daughter was a genius). She was pretty cute as far a little kids go. She had the requisite round face and shiny blue eyes that have not seen too much to know better. She was smiling her two-toothed grin.

As far as the outfit goes- she had on a corduroy jumpsuit with a flower cardigan and rather flashy (for a 16 month old) plastic necklace. By all estimations most people would have been cooing at this kid. In fact some heads even turned around me to inspect and admire the “little darling”.

Her name, I later learned was “Claire” and her mother affectionately called her “Claire-Bear”. I smiled at Claire and tried to ask all the “right” questions;

How old is she?
What is her name?
Is this your only child?

You know…. The standard operating conversation when faced with a solitary mother on a plane whose child will be seated next to you in a confined tin can of a space for the next few hours….

Make no mistake- Claire was a cutey. But in that lies one flaw- I don’t like kids. I know, my girlfriends, there you sit shocked and in horror. “How can she not LIKE kids?” you think. “Who doesn’t like kids?” you ask.

Well, it’s me. Me and the old lady in Hansel and Gretel. We both don’t like kids. If some eight year old comes by my gingerbread house hungry and decides to take a bite out of my back porch, make no mistake- I am locking them in the cellar without hesitation.

It’s a shame really. I suppose it is a true character flaw. I wanted to LIKE little Claire-Bear with her sweet little flower cardigan and pediatric bling. I even paused for a moment to “check my insides”. Maybe there was a shred of sentimentality that was dormant and would now spring forth in the presence of this little cherub from Yellowknife.

Nope. Nothing. All I could think of was “Why is it people still count their kids ages in months? What’s with the 16 months? When does that shit end? When she’s just over five years old will it be 64 months or five and a bit?”

It’s official. I do not have the maternal instinct. Make no mistake- I think I am a great caregiver. But I would make a crappy mother. Not only do I not have the desire (which is pretty EVERYTHING) but also I am wayyyyy to selfish for the job.

A study done in Japan in 2008 looked for physiological evidence of the maternal instinct. Tokyo researchers used functional magnetic resonance imaging (M.R.I.) to study the brain patterns of 13 mothers, each of whom had an infant about 16 months old.

First, the scientists videotaped the babies smiling at their mothers during playtime. Then the women left the room, and the infants were videotaped crying and reaching for their mothers to come back. All of the babies were dressed in the same blue shirt for the video shoot.

M.R.I. scans were taken as each mother watched videos of the babies, including her own, with the sound off. When a woman saw images of her own child smiling or upset, her brain patterns were markedly different than when she watched the other children. There was a particularly pronounced change in brain activity when a mother was shown images of her child in distress.

The scans suggest that particular circuits in the brain are activated when a mother distinguishes the smiles and cries of her own baby from those of other infants. The fact that a woman responds more strongly to a child’s crying than to smiling seems “to be biologically meaningful in terms of adaptation to specific demands associated with successful infant care,” the study authors noted.

This obvious problem with this study was that it did not look at MRI’s of women who did not have children to see if there was a significant difference between them and the “parental controls”.

But I could not help but wonder if my brain was in fact wired differently? I mean aside from my obvious quirks and eccentricities (yes, I realize I am a bit special that way) was my brain hard wired against a motherhood principle?

This issue became all too evident when after boarding the entire plan, the flight attendant informed me that the isle behind me was free and should I like to move from my window seat I could in fact have an entire row to myself.

“She’s really good on planes”, Claire’s mother reassured me, “But I understand if you want to move. “

A hush fell over the plane. Everyone looked my way. Was I going to make a mother who had spent the last 10 minutes getting settled get up out of her seat with child in hand and move aside so that I could vacate?

Damn right I was. It was free isle for God’s sake- one without a child in it…. Farewell, Claire-Bear. It was lovely to make your acquaintance but I am one of the childfree in this country. As such, I am entitled to die alone and fly in peace. I blame my brain…. My brain made me do it. Amen.
Posted by Girlfriend's Guide to Health at 6:35 AM