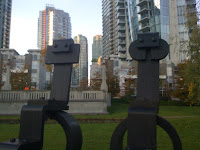 I had dinner with a lovely friend the other day. We had wonderful conversation and a real and much needed “catching up session”. She is “with child”, due today in fact and a big shout out to her if she is reading this between contractions.

The conversation flowed as easily as the sparkling mineral water and the best Italian food this side of Roma was enjoyed by all.

Somewhere between Cioppino’s Vitella Tonata and Seared Sablefish she dropped a conversational “bomb” and this week’s topic as she informed that she saw a woman only last week crossing 4th avenue in Vancouver WHILE breastfeeding her baby.

“You’re kidding me?” I asked. And sure enough she went on to explain that she had seen a woman with her child in a sling across her chest walking down the street in Kitsilano and the baby was sure enough, hand to heaven, having a mid-afternoon snack.

Girlfriends, I now appeal to you. Many of you have children and I am a fan of a good immune system. I am not opening up a debate on breastfeeding itself. It is in fact a GOOD thing. No debate here.

A huge survey has found striking evidence that mothers who feed their babies by breast end up with far fewer overweight and obese children.

The study, published in the British Medical Journal in February, 2011, found that 4.5% of bottle-fed babies were obese by the time they reached five or six-years-old.

Only 2.8% of babies given only breast milk after birth were obese when they reached school age.

Researchers looked at 9,357 overweight or obese children from the German region of Bavaria as they reached school entry age, and quizzed their mothers on how they were fed in the months after birth.

Compared with the 4.5% obesity rate of those children who had never been breast fed, only 3.8% of those who had been fed by breast for just two months became obese.

After breast feeding for three to five months, the likelihood of obesity was only half that of a bottle-fed child.

And less than one per cent of those breast fed for more than a year became obese.

As far a breast feeding goes- there is definitely a scientific case for disease prevention.

That being said, is there not as they say in Ecclesiastics, a “time for everything under heaven”?

Are we that busy, or furthermore is the baby THAT hungry that he/she needs a boob in transit? I can’t speak from experience here- I WAS never breastfed and I never will breastfeed. That being said- in my opinion, the only time a woman really can justify a “Breastfeed Walking” is if she was born in the Bronze Age or if she is crossing a continent in search of food and/or shelter.

This lady was not a political refugee nor was she in search of a the continental shelf. She was in fact sporting a Yoga mat and a serious case of what I can only call “the Marsupials”.

Ladies, I beg of us all…. Put the boob away, cross the street and take out the mother of all happy meals at a Starbuck’s with a blanket draped over the girls for a little privacy. Hell you can feed your child and flash me your nipples if you really want to but at least let’s not take multitasking to a an unholy level?

Am I being unreasonable dear sisters? Put the breast down and step away from the vehicle. Oh, and buckle up… it’s a scary world out there.
Posted by Girlfriend's Guide to Health at 5:00 AM