Let's Hear it for the Boy 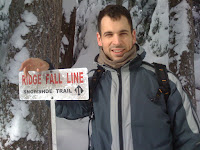 So the annual holiday of Love so to speak has passed and I took a moment on the side of the mountain to think about my relationship. Yes, my girlfriends, here I am at 12,500 feet at a campsite on Mount Kilimanjaro.

I told my beloved I wanted to climb a mountain and he said “sure”. In his defense, I don’t think I gave him another option. That being said, last night in our mountain tent huddled into our -30 degree Celsius sleeping bags, we exchanged Valentine’s Day cards and professed love and devotion. Given there was 30% less oxygen in the room- I could not help but believe him.

You really must love someone to climb a mountain on HIS OR HER whim. Yes, my Jason… you are a God. That being said, I am a Goddess so we’re both good to go.

Please understand my disclaimer here when I say that I actually have imagined this whole “card exchange in the tent” scenario as I write this posting at Heathrow Airport en route to Tanzania. I will not have any access to Internet for the next two weeks so all further postings have been “planned ahead”.

Duty Free Versace and a sleeping husband of 14 years…. Hell it must be Valentine Day somewhere.

But here on the day that celebrates love and relationships I think it is time to examine the science behind it all….

SO there you have it. My beloved (the dude in the tent on the side of the mountain) makes me a healthier person.

Not only does he feign ignorance over the size and cost of my shoe closet and not only does he entertain my adventure whims so to speak (mountain company included). but in fact he may be lowering my cardiovascular risk as well….

So excuse my indulgence dear girlfriends as I give a little SHOUT OUT…. To the man behind the woman…. For lowering my cholesterol but not my standards. Hell throw back your heads and sing it with me sisters, “Let’s hear it for the boy!”
Posted by Girlfriend's Guide to Health at 6:43 AM