My Life on TV 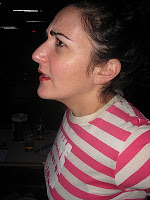 Does television indeed rot the brain? I ask this question in earnest because I have been watching Gossip Girl for 3 seasons now and sometimes when I shake my head too quickly I get a bit dizzy.

I have tried to stop the television addiction. I have tried to “go without”. But life is too real to not have a few hours of fantasy on a daily basis.

I love it all. I love the crap, the reality television that is engineered to lower my intelligence. I love the witty comedy that allows me to laugh out loud. I love the drama ala HBO which never has a resolution and always ends badly.

This weekend, I was on call in the ICU. I am embarrassed to say that my only wish on Sunday night was purely prime time driven. No, I did not hope that my lovely man on a ventilator would come off the life-supporting machine. I did not hope for peace on earth and good health for all…..

No the shallow, vapid woman in me put on my bestest Louboutin heels and watched the Golden Globes awards. All I could hope for was 3 hours of blissful silence from my pager so as to ensure that I could watch all the splendor and the (lack of) substance that is Hollywood. I loved and judged them all.

From the what the hell was she wearing January Jones, to the perfection that was Anne Hathaway. From the Bride of Frankenstein Hair that was Scarlett Johansenn to the fabulous shag of Olivia Wilde (that made me want to cut my own bangs there and then!!) I sat in my hotel room in Southern Alberta a watched and learned an prayed to the goddess that all would be well in my professional life so that my television world could live in peace and health.

And then this morning, my aftermath began. Awaiting me in my email inbox was the results of recent study from the Scottish Health Survey.

According to the Scottish Health Study, people who spend two or more hours a day in front of a screen (be it television or computer) during their leisure time have more than double the risk of heart attacks and strokes that those who spend less than two hours a day. The findings correlate mostly with watching television and exist even after adjustments were made for physical activity.

The results also show a 50% increased risk of all-cause mortality for those who sit in front of a screen for four hours or more a day compared with those spending less than two hours on this activity.

The researchers in this study followed 4512 people over the age of 35 from 2003 to 2007 and assessed them for all-cause mortality and cardiovascular events (heart attacks and strokes).

The information on sedentary time was taken from a question about how much time participants spent in front of a screen during leisure time, both during the week and on weekends and averaged out to a screen-time-per-day exposure. Participants were put into one of three categories: less than two hours of screen time a day, two to less than four hours per day, or four hours or more per day.

There were 215 cardiovascular events and 325 any-cause deaths during the four years of following up. The adjusted hazard ratio for all-cause mortality, including adjustment for physical activity, was 1.48 for those engaging in four hours or more of screen time relative to less than two hours, and for cardiovascular events, the adjusted HR was 2.25
This means that people who watch 4 or more hours of television have 2.25 times the risk of a heart attack or stroke as those who don’t and one and a half time the risk of dying.

The researchers found that approximately 25% of the association between screen time and CVD events was explained collectively by body-mass index, and cholesterol. The remaining 75% could be attributed to other factors that were not considered, such as diet and psychological factors.

I’m a bit saddened, my dear cybersisters. I will say it plain…. I love my TV time. I have even bought a trainer to hook my beloved bike Stella up so that I may turn her into a stationary bike for the winter. All so that I can ride and watch without an ounce of guilt. I had a dream dear sisters. I had a dream where everyday I sit or bike and escape to a world of entertainment. A world where surgeons are really good looking AND really smart, a world where 20 year olds can afford couture, a world where there really is America’s Next Top Model and a world where Quickfire Challenges and Immunity really mean something.
And now some Scottish study has killed my dream.

So there you have it…. I’m officially on a TV diet. Cutting back to an hour a day…. Two at the most. And now in the name of my good health, I stare at my new blank flat screen and wonder…. WHY ME? At this rate it will take me a week to see the Oscars in their entirety. .
Posted by Girlfriend's Guide to Health at 5:26 AM