Chicken Soup and My Soul 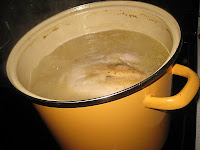 I have the flu.

It began on January 1, 2011 at 4 am. My husband still is convinced that it was a left over from New Year’s Eve.

Let’s be clear, this was not the alcohol. I know you are thinking that this was purely a hangover masquerading as a viral illness, but yes (I’m gonna play the trump card) TRUST ME…. I’M A DOCTOR.

First began the nausea, then the vomiting. Man that was fun. Twenty-four hours of fevers, chills and feeling like I was going to lose my stomach contents at a moments notice.

Make no mistake- I am not looking for sympathy. We all get the flu. Hell I am sure some patient somewhere coughed the wrong way and bingo I’m a Petri dish. It happens. I work around a lot of sick people… this was my first flu of the year… my time had come due.

And normally I would have taken it like a champ. After all it WAS flu season. I am all about being IN SEASON.

But, my flu came about on the morning that I was scheduled to get on a plane for five hours for a cross-country flight to Toronto.

Everything is magnified at 35,000. A viral illness is a perfect example of the phenomenon.

Let’s be clear, I came prepared, despite my predicament.

I had an empty stomach, a fist full of Advil, a bottle of fluids, Gravol and the window seat. Couple this with 2 milligrams of Ativan and one of those travel pillows and I was ready to go.

The plan was simple.

Keep my stomach empty.
Take the Gravol first and a small amount of fluids, so as not to vomit up water in the lavratory of the airbus 757.
Down the Advil 45 minutes after the Gravol giving the antiemetic (anti-vomit medication) time to work and allowing the anti-inflammatory to kill the pounding in my body and brain.
Slip two milligrams of Ativan under my tongue.
Put the Neck pillow in place.
Fall asleep in Vancouver and wake up in Toronto.

The goal here was clear. I needed to get from my bedroom on the Pacific to the hotel room on Lake Ontario alive so that I could fall asleep dying, let this freakin virus run its course and wake up a healthy woman once more.

And so it began. My journey from one time zone to another as a vessel for a viral illness. I felt like some twisted drug mule.

Let’s be clear. I am NOT debating the benefits of the flu shot. I had my flu shot this year. I’m a fan of the flu shot. I love it that as human being we have been able to harness medical technology to our advantage and fight disease at any turn.

I like immunity- on Project Runway AND in life. Unfortunately, my flu shot only covers 3 of last year’s most common viruses and again I find myself a visionary.

This means that whatever made me feel like I wanted to die on Air Canada flight 212 was just another virus not covered in this year’s flu shot. Shit.

And so began my flu of the season. Dayquil followed Nyquil. I sampled a variety of sugar free cough drops to the point of exhaustion. I know that the only thing that will cure my real ills here is time. This is a virus. The only thing that will fix my current state of illness is to allow this bastard of a virus to run its course.

But for now, more than a week later, I am breaking out the big guns…. Chicken Soup.

As I write this I have two large chickens boiling away circa Fatal Attraction on the stove.

A study published in CHEST magazine in 2000 showed that chicken soup may in fact inhibit the activity of white blood cells during infection causing an “anti-inflammatory effect”. The study was spear headed by Dr. Stephen Rennard of the University of Nebraska Medical Center in Omaha. Using the blood from healthy volunteers, Dr. Rannard looked at the activity of neutrophils. the most common type of white blood cells, after being exposed to chicken soup from the Rannard’s wife’s family recipe. Dr. Rennard theorizes that by inhibiting the migration of these infection-fighting cells in the body, chicken soup essentially helps reduce upper respiratory cold symptoms.

The researchers couldn’t identify the exact ingredient or ingredients in the soup that made it effective against colds.
In another study published in 1978 in CHEST magazine, researchers in Miami at Mount Sinai looked at how chicken soup affected airflow and mucus in the noses of 15 volunteers who drank cold water, hot water or chicken soup. In general, the hot fluids helped increase the movement of nasal mucus, but chicken soup did a better job than just the hot water. The thought was that some of the proteins in the chicken soup might improve the function of protective cilia, the tiny hair like projections in the nose.

So it really is touch and go when it comes to the soup. The evidence is weak at best. I realize that there is no magical cure for my flu of the season. All I can do is rest, drink fluids and wait for the storm to pass.

As far as the soup goes…. It can’t hurt. Sometimes, dear girlfriends… you have to just believe- like good credit, good style and good faith…. There has to be a power bigger than ourselves that makes us sit up and take notice.
Posted by Girlfriend's Guide to Health at 5:55 AM