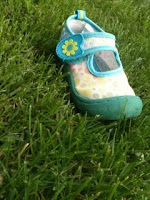 My mother has perfect skin. If she is reading this right now she is undoubtedly touching her face. At seventy she has a few wrinkles (what woman without Botox doesn't?) but she has this perfect creamy white skin that is as soft as can be. My mother does not deserve her perfect skin. Make no mistake- she's a lovely woman; a saint in fact. But she washes her face with.... wait for it.... Dove soap and water. This is not a product placement, this is a fact. She has not used moisturizer on her face as long as I have known her.

Perhaps she avoided the sun in her youth and no she never smoked. But she does not adhere to a special diet. The woman keeps mini York peppermint patties in her purse (again no product placement, just fact) and a Jeannie's Cake (Winnipeg's famously beloved birthday cake) in her freezer at all times.

As her daughter, I thought some of these kick ass skin genes would cross the womb, so to speak. As a teenager, I used Mama's tried and true Dove soap and water. I was relatively unscathed in the acne department.

Sure once a month my face broke around the time I became an irrational evil person but things would settle down and my skin was none the wiser.

Now on the verge of 40 (how many blogs will I mention the fast approaching four-oh?) I have developed adult onset acne.

Prior to writing this I spent a good fifteen minutes staring at my pores in one of those bastard close up hotel bathroom mirrors. These mirrors really are assholes. Firstly, they are undoubtedly placed in a location in a hotel bathroom that involves several yoga classes and unrealistic core muscles in order to view your pores properly.

Let’s be clear- I’ve been training to climb a mountain and so I am physically better prepared to stand in my underwear crouching tiger over a mirror and a sink arms poised in assault on any blackhead that dare to show its… well its head. And now, fully stretched across said sink, I am looking into a mirror that has magnified my face 20 fold when it dawns on me that perhaps nothing, not even one’s skin should be viewed at such a magnification.

Were we ever meant to see any part of our body “up that close”? Or is this yet another contraption made by some marketing bitch that serves only to make you feel both fascinated and ashamed at the state of your current physiological affairs.

So hear I am fumbling towards forty and Rather than wrinkles, I’m facing a state of acne that only a teenager could really sympathize with. Good news is, my middle age has afforded me just enough apathy and neuroses to make the current state of my skin fill me with a mixed bag of emotion.

Part of me could not care less. I have the means to buy the really good cover up and a sample cupboard at my office to provide me with enough pharmaceutical grade acne creams that would make the teenage version of myself swoon.

The other part of me is just neurotic enough to wonder how long will this dermis rebellion last. Am I the girl who is going to have zits instead of crows feet? Or worse yet? Both?

I had long come to terms with my looks somewhere after age 35 when I learned that anything can be beautiful with the right pair of footwear. That being said… when your red spotted face matches your red soled shoes… life gets rather complicated.

A study published in the American Journal of Dermatology show that I am not so alone with my face up against a cruel and judgmental bathroom mirror....

The study looked 749 people over the age of 25 as a community-based study to investigate the current prevalence of facial acne in adults.

The group of people were examined at random and found that some degree of facial acne was recorded in 231 women and 130 men, giving an overall prevalence in women and 40% in men. The prevalence of acne did not substantially decrease until after the age of 44 years in this patient population.

A further study published in 1998 in the British Journal the showed that the rate of the referral of patients over the age of 25 years with acne has significantly increased over the past 10 years.

In this study the prevalence of adult acne in women was significantly higher at 76% of women and 24% of men. The mean age of the patients was 35.5 years (range 25-55 years). The acne was mild or moderate in severity. Most patients had persistent acne; but true late-onset acne (onset after the age of 25 years) was seen in 18.4% of women and 8.3% of men.

Thirty-seven per cent of women with adult onset acne had features of hyperandrogenicity ( increased testosterone) with other clinical features like male pattern hair growth (see my previous rants about my mustache) This may be an indicator of other disease states in some women including polycystic ovary disease.

External factors, such as cosmetics. drugs and occupation, were not found to be significant causal factor. A family history revealed that 50% of patients had a first-degree relative with post-adolescent acne.

So... Here I am in another hotel room bathroom mining my black heads with the pride of a Chilean miner. My mother's Dove (soap) has long flown the coop and I know spend far too much on facial promises that make promises they can not nor will not keep.

I have resorted to flirting shamelessly with the drug reps who frequent my office pedaling their high grade pharmaceutical facial creams in the hope that one day.... I will have Mama's dermatological legacy.

According to the evidence my skin should improve in the next 5 or so years..... Just about the time the wrinkles fully take hold.

Until then, If you need me, I'll be in the bathroom crouching tiger, hidden dragon over a magnifying mirror. It may do nothing for my face but my character and my abdominal muscles have never been stronger.
Posted by Girlfriend's Guide to Health at 9:37 PM