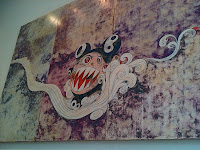 I am not a bitch. Contrary to popular opinion I am as nice a person as the next woman (that is if the next person is relatively pleasant).

As a doctor, I try my best to be somewhat level headed at all times. Sure I’m emotional (and somewhat self aware) but I try to maintain some sense of existential decorum.

However, once a month, my head splits and an emotional demon from hell emerges.

Yes, I’ll say it proud, dear girlfriends, I suffer (or rather those around me do most of the suffering) from Premenstrual Syndrome.

Don’t feel sorry for me, my cyber sisters. This is my plight and my permission. I really don’t need your pity- I am making my bitchiness work. Why just last week I felt the need amidst my Progesterone wrath to call American Express and unleash the “dogs of hell” over an error made to my list of charges. Rest assured my hormones did not go to waste, as only this week; I received an apology from the president and a $100 gift card for my troubles.

What good is a uterus if you can’t use it to buy shoes?

Day one begins with a bang…. A crushing bang to the midsection, to be precise. This is where I feel like I have the flu AND I broke my pelvis all in one morning. The only thing keeping me positive throughout the mind numbing cramps is that the moodiness and anger of the preceding three to seven days can now justifiably end.

Five or so days later the glory of womanhood be gone and I can start wearing my good underwear again. I go about my daily life and almost forget that I have two ovaries and a uterus secretly plotting against me, like some evil stepsisters.

The days turn into weeks and before I know it, I start feeling a little sad. By day 24 this sadness has blossomed into an irrational flurry of emotions and I am crying at everything from a Disney preview to a Kleenex commercial.

Day 26 ushers in a wicked case of “veldtshmertz” (what the Germans would call world sadness) and I can no longer watch CNN or any news program for that matter. Suddenly, any world event has me reeling on the verge of an existential crisis.

Days 27 and 28 are spent with a full-blown case of the “bitchies” and if my beloved is reading this… I apologize for the 24 days a year he has had to endure said wrath over the last 16 years. When I sit down and do the math- that is collectively over a years supply of prime grade evil.

I will pick fights just to have them. I will make unholy requests of any relationship around me. Even more “untrue to form” is the fact that during this period of time, I develop an insane craving for all things deli and M&M pretzels.

Yes, dear sisters, me, the health freak spends 2 days a month fighting off the inner pull for chopped liver on rye and candied covered salt. It’s a world gone mad.

But it turns out; none of it is my fault…

A recent study presented at the American Society for Reproductive Medicine in Denver, Colorado in October, 2009 shows that the women’s’ brains are significantly affected at various stages of the menstrual cycle.

The study took MRI’s of more than two dozen women while they were looking at different pictures and had them rate the photos as pleasant, unpleasant or neutral. The same photos were shown to all women at different stages during their cycle.

At each instance an MRI was taken of their brains while they were viewing the photos.

In the early stage of the menstrual cycle (called the follicular phase- my days 7-12), no areas of the women's brains showed significantly increased activation while viewing the pictures.

During the midpoint of their menstrual cycle, when hormone levels were higher, the women had increased activity in the lateral prefrontal cortex and other areas of the brain involved in processing emotional information, the researchers found.

By the later phases of the cycle (days 20-28) the activity in the lateral prefrontal cortex was at its highest.

The fact that this study shows a correlation between hormonal levels and certain activity is no surprise to most women out there.

Who among us has not felt freaking crazy during the later parts of our monthly cycle??

Previous studies have found that the rate of affective disorders (mood disorders) is two times higher in women than in men. Many experts believe this difference is from sex hormones. Perhaps there is some truth to this, but further studies need to be held before we can blame our “girly parts” for all things crazy.

SO science wins again! I am not a bitch…. It’s just my prefrontal cortex in a bad episode of GIRLS GONE WILD. Whatever will I do?

For now, I’ll count out my life in teaspoons of hormones to paraphrase T.S. Eliot. I’m sure he suffered from a great deal of sadness. If only the dude had a uterus…. He’d have someone to share the responsibility.
Posted by Girlfriend's Guide to Health at 6:26 AM