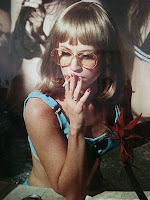 I was having the most lovely day on a date with myself in New York City. Picture it dear girlfriends…. I began with a run in Central Park followed by breakfast at my hotel. Early morning was spent at the three major spiritual centres of worship (Saks Fifth Avenue, Bergdorf Goodman and Barney’s) followed by lunch at the Plaza hotel.

Feeling fashionably, physically and nutritionally nourished I thought my soul could use a pick me up and so I found myself standing in line at the Museum of Modern Art. I was having just a perfect day thus far and was looking forward to a little bit of French Impressionism to add to my day of Italian Footwear appreciation.

Just when I thought I would be all the better for this experience, the woman in front of me in line lit up a cigarette and began to puff away. Why must so many smokers always flaunt their habit? Is it that “bad girl image” she was trying so hard to uphold? Wan’t it this very “bad girl image” that got her smoking in the first place?

I know I have blogged once before about this “Butt”, however this bears a “second hand look” so to speak.

There she was some twenty something European tourist (she was speaking German and Europe seems to be the place to be if you are a smoker) literally blowing smoke up my ass and in my face.

Now, I am not a religious person, spiritual, yes, but religious no. I am rather shamefully proud of the shallow part of me that feels that Sunday brunch IS sacred and that Barney’s (the store, not the dinosaur ) is indeed a house of worship. All this being said, I believe I did in fact have a True belief in a higher power in that moment in line at the Museum of Modern Art. For there I was standing in the face of “cancer by proxy” and it started to rain.

And so my little German smoker who was blowing her Marlboro’s up and around for all in line to experience had not come prepared and was without an umbrella. She smiled at me sweetly as I promptly opened my big black “W Hotel” umbrella (on loan from the lovely concierge) and I smiled back waiting patiently for the downpour to wash away her cigarette’s ember, her unhealthy habits and of course her sins.

Moments later, her cigarette was soaked and she finally put the damn thing out. She looked over at me from her puddle of shame and like a little drowned cat with big sorrowful eyes she appealed to my sense of humanity,

“Do you have an extra umbrella?” she asked me. I think she asked me because I was literally staring at her grinning at my climatary luck, so speak.

And I opened my eyes equally wide in order to match her gaze and responded with a degree of mutual respect that was worthy of the situation.

A few minutes of rain later, she soaked, me dry, the line moved and in we went to appreciate the works of this world’s masters.

Why did she have to smoke in line? If only she had walked away some 50 feet or so, had her cigarette and then come back to the line…. I would have been happy to share my umbrella with her.

Make no mistake, dear girlfriends, I am NOT a heartless cow. I DO indeed care for the common man and woman. But, I love my lungs more than I love this stranger’s blow-out. Thus my umbrella, on this day was purely a table for one.

The interaction was a selfish one on my part…. But hey, she started it? Right?

Tobacco smoke contains more than 4,000 different chemical compounds, more than 50 of which are known to cause cancer. It is undeniable that smoking significantly increases one’s risk of developing a variety of cancers (including lung, breast and bladder) and heart disease as well as lung disease and stroke.

When you breathe in smoke that comes from the end of a lit cigarette, cigar, or pipe (sidestream smoke) or that is exhaled by a smoker (mainstream smoke), you're inhaling almost the same amount of chemicals as the smoker breathes in.

According to the American Cancer Society, nonsmokers increase their risk of developing lung cancer by 20% when they are exposed to secondhand smoke.
This equates to about 3,000 deaths annually from lung disease in nonsmokers caused by secondhand smoke exposure.

A review article published in Circulation in 2005 confirmed that second hand smoke increases a person’s risk of heart disease by about 30%. Furthermore, the study looked at all research on second hand smoke published from 1995-2005 and found that second hand smoke affect the cardiovascular system very much the same way that first hand smoke does.
The evidence shows that the cardiovascular system—from blood vessel stiffness to atherosclerosis to oxidative stress, inflammation, heart rate variability, and energy metabolism, are all exquisitely sensitive to the toxins in secondhand smoke. The effects of even brief (minutes to hours) passive smoking are often nearly as large (averaging 80% to 90%) as chronic active smoking.
Let’s be clear dear girlfriends, I was not spending hours training for triathlons because it was good for my personality. All that sweat and tears was not going to be flushed down the proverbial toilet just because some lovely German girl needed a “nic fit”.

And so yes it was very mean of me to leave one of my foreign sister “out in the rain”. It was cold and I was cold hearted. But I was putting my lung function before her well being and that was something I would have to live with.

Hours later wandering through the Impressionists’ hall at the MoMA my soul refreshed I took a long deep breath as I stood in front of Van Gogh’s famous Starry Night.

It felt so good to breathe and the air was pure. I forgot about the rain and the smoke and noises in my head for just a moment and the world was new again.
Posted by Girlfriend's Guide to Health at 7:00 AM