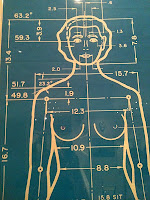 Last week, Tuesday in fact, a car hit me. Yes Mother, if you are reading this, I never told you because somehow you would only worry and likely make some attempt to “forbid” your 40-year-old daughter from ever riding a bike. I was hit by a car while riding my bike.

Here’s the scene. I was making a right turn from a bike lane into a bike lane. A minivan (yes, my hate for the damn minivan is now deepened AND personal) came up from behind and side swiped me. My elbow made contact with their side view mirror (nice bruise to show for it) and I was knocked to the curb all in front of the Hermes store. Incidentally they were having a red carpet party (balloons and all) at Hermes that night and the lovely security guards out front were very helpful in getting me to my feet and making sure I was okay.

I took off on Lucy (my tangerine dream of a bike) and rode up to the van as it was parked at the next red light. Fueled by a sense of self righteous indignation I banged on the window.

Now understand please that I am now going to be mean. I was hit by a car, dear girlfriends, this should allow me at least 200 words of unjustifiable venom.

The driver of the car was not a real blonde. I myself have been dabbling in hair dye, but this woman had a platinum do that was just plain trashy. Think Jersey Shore not Marilyn Monroe. Further more, she had that really pastey pink lip stick thing going on that made her look like she was suffering from a wicked case of herpes and was putting some weird cream on her mouth to prevent an outbreak.

One final observation…. Her eyebrows had been plucked into near oblivion.

So when she pointed one of her shoddy acrylic nails at me and said with a bit of chuckle,
“I barely saw you, you know.” I did in a moment of sisterhood feel a bit sorry for her lack of style.

Then I remembered that her lack of style had just hit me with her minivan and I recovered.

“Well, you came pretty close to the car, you know.” This was from her boyfriend
who was riding shot gun. I could not help but notice his “What’s Jersey Wearing” homage to fashion complete with a fake tan and an ever popular tattoo art type t-shirt.
And yes, my cybersisters, I lost my shit.

“Dude, (I did call him dude) are you insinuating that I hit your car with my bike?” Perhaps they did not understand what “Insinuating” meant, because they told me where I could shove my bike and proceeded to drive off.

Now, my beloved always tells me that I do have a bit of a horse-shoe up my backside. Well thank my lucky stars that riding in the car behind these upstanding citizens was an off duty police officer who in a good Samaritan move stepped out of his car and took down this lovely couples information in order to file a report.

I left the scene feeling a bit mournful for the future but with a renewed respect for our “boys in blue” and a renewed and more personal detest for minivans.

The left side of my body hurt like a mother-fun-house but nothing says pain killer like a cross to bare, a bone to pick and a cracked bicycle fender.

A week later, Lucy- my beautiful tangerine dream of a bike (you may remember her from a previous post) has survived the event and apart from some kick ass bruises which make me feel very butch, I am relatively unscathed.

You should know, I always wear a helmet. Firstly, it reinforces my need for an outfit. I have always maintained that a headpiece of any kind, will always tie a look together. Secondly, nothing says sporty and fit like holding your helmet once you’ve parked your bike somewhere safe. Finally, I have huge hair. When I am riding to work and back, the helmet tends to “tame my mane”. Fashion, sport good grooming and a statement piece…. It’s a process…. Nuff said.

According to a study published in the New England Journal of Medicine in 1989, bicycling accidents cause 1300 deaths each year in the USA. This is compared to 26,000 deaths from motor vehicle accidents. A case control study looked at the use of helmets in reducing head injuries among cyclist. According to this one year study, of the 99 cyclists with serious brain injury only 4 percent wore helmets. In regression analyses to control for age, sex, income, education, cycling experience, and the severity of the accident, the study found that riders with helmets had an 85 percent reduction in their risk of head injury and an 88 percent reduction in their risk of brain injury.

A further population study in the Journal of Trauma showed that bicycling accidents happen less frequently per capita in communities with a higher proportion of cyclists. In other words…. The more bicycles…. The safer.

Seven days later, several bruises (to my cycling mojo more than anything) and a new relationship with anti-inflammatories and I am a new woman/cyclist. Lucy has been to the bike shop and back with a clean bill of health. I have my guardian angel/off duty cop to thank for defending my honour.

To top it all off, I bought myself a new top of the line fabulous helmet. It’s light as a feather and strong as an ox…. All in the name of safety and science I found myself another statement piece. Life has a way of always working itself out.
Posted by Girlfriend's Guide to Health at 7:00 AM