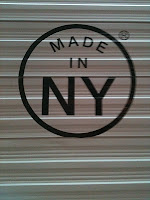 Have you ever listened to women chatting while standing on line at a
public washroom? Well in the name of research I have on many occasions.
As recently as this past weekend, in fact in
New York City at a Broadway production of time stands still.

Let's be clear. Broadway is most definitely the shit. I saw some amazing
theatre that most definitely deserves the hype. The theatres however were built 50
or so years ago when women apparently did not have to pee as much.

Perhaps they drank less? I can only surmise that portion sizes were
different back then and perhaps socially speaking we were conditioned
to hold things in more.... Our opinions, our vote, our voice and yes,
our urine.

An so there are only 4-5 stalls in each single washroom in any given
Broadway theatre. Well we now no longer hold anything back... Our
opinions fly freely. We vote, we hold offices of power and politics
and we drink venti americannos like they ate our life blood. Thus we
pass urine as readily as we pass judgement.

And so the line up for the ladies washroom at this Broadway play was
long... I mean Oliver stone movie kind of long. It went down a flight of
stairs, across a powder room and into a small sub chamber towards 3
stalls 2 sinks and some lovely smelling hand soap. I had spent the
preceding morning subsisting on coffee and retail and I had to pee.

I learned a lot in that line up of line ups.

I learned that all New Yorkers sound like they are my Jewish Aunt Ethel. This is due entirely to the stereotype that all Jewish women talk they are from NYC. But seriously (said in a Brooklyn twang and with a hand gesture) it’s true.

I learned that New York women as a rule have had a lot of work done. Forget California- this little island of Manhattan had more silicon than a Microsoft conference. Botox and Restylene and Juvederm, oh my! In a line up of 27 women I counted 12 sets of cheek implants, 8 face lifts (4 of them dreadful) and at least a dozen nose jobs. As for Botox- New Yorkers don’t smile much to begin with…. It was hard to tell…. But I would estimate double digits easily.

I learned that women talk in details. Mostly regarding their health and use terms like “They say….” To begin sentences where they want to convey a sense of authority. For example….
“Sally Hershberg had her spinal surgery, you know. She spent 4 hours in the operating room and another 2 hours in recovery. They operated on her face down and she had a puffy face for 4 days afterwards. They say she’ll be flat on her back for at least 3 months. She’s still going to try and host book club. We’re reading Lovely Bones again. I think it’s too depressing but the girls want to do it. They say you remember details better when you read a book twice.”

Most of all, I really wondered what is it about the female bladder? This was not the first time I had stood in a line somewhere in some theatre listening and waiting and holding it in.

I would leave, having emptied my bladder, having washed my hands and reapplied my lipstick and I would pass the entrance to the men’s room and of course… it was as empty as could be. In fact as a little girl I can remember going to the ballet with my parents. I can remember lining up at the women’s washroom at Winnipeg Concert Hall during intermission as the line snaked around the lobby. I remember glancing over to the men’s room and seeing men come and go in and out like bees to a busy hive without a delay or a care in the world.

It was only in those moments that I wanted so badly to be a boy. Do not worry- this passed as soon as I discovered the power of a good Handbag.

But I had to pause in this old theatre on this wonderful day amidst the women of Manhattan and wonder…. What the hell is with my girly bladder??

A study in the Journal of Urology published in 1991 had just the answer for me.

The study looked at urination among almost 700 patients. The patterns and frequency of daily urination were studied in 412 male and 244 female participants in the Baltimore Longitudinal Study of Aging. Men urinated less often (mean 4.8 voids per day) than women (mean 5.6 voids per day).

There was no main effect for age decade. However, an age by sex interaction showed that urination in men increased across the decades and in women it decreased.

In men frequency of urination was related to benign prostate enlargement and 2 of 4 symptoms of urinary obstruction (change in the force of the urinary stream and having to urinate again shortly after voiding).

In women a decrease in frequency was related to a lack of pregnancy complications. In other words, men peed more if their prostates were bigger and women peed less if they had easier pregnancies and less trauma to their urinary tracts during childbirth.

in both sexes frequency was unrelated to the reported daily ingestion of coffee, tea or diuretics, and no relationships were found with a history of an anxiety disorder.

And so I realized that by this argument the problem with a Broadway show was thirty something women who brought their bladders to the show.

Studies show that men and women have the same size bladders yet, women urinate more often due to the pressure of the uterus on the bladder causing less bladder control and retention.

Make no mistake…. I loved my Broadway experience, bathroom and all. I learned more in those lines than I did in some high school classrooms.

I’m now home safe back on the west coast where the women still pee like racehorse but talk like Canadians. I am comforted that the years will advance and my bladder will grow better so to speak as my male counterparts will eventually catch up to me,

I take comfort that my 70’s will be my great bladder equalizer. I will have to wait another thirty years in lines at washrooms while the men’s room remains relatively free….. until then…. I will always have Broadway.
Posted by Girlfriend's Guide to Health at 8:00 AM