On a Wing and a Hair 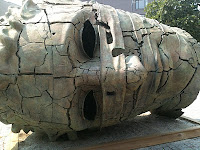 Truth time, dear girlfriends…. I am one hairy cybersister. I would bet my best set of tweezers that there are so many of us bearded ladies across this great nation. Hell I’m sure given the wrong attention to grooming and we could start some freaky revolution. Take away our bleach and our wax and our laser hair removal and we are just asking for the kind of facial hair uprising that the likes of even Frida Kahlo had never imagined.

My grandmother lived with us when I was little. One of the clearest memories I have as a child was sitting on the couch with my grandmother and painstakingly plucking her chin hairs while we watched Sunday afternoon football. I was really good at it. I took pride in cleaning up her chin, meticulously plucking and pulling every last family heirloom as though my ancestors’ honour depended on it.

Would I ever grow up one day and be able to grow my very own bit of facial hair? Could I be so lucky to have a little mustache or goatee of my own someday?

And like all little girls in pink bedrooms all over this great nation, I went to bed each night and said a little prayer to the goddess above that someday I too could have something of my very own to pluck at each day…. A little unsightly black peach fuzz above my bottom lip or dare I ask? Was it too much to ask for five to ten black freestanding single hairs around my chin and jaw line?

And then almost overnight, all my dreams came true… I remember it as though it were only yesterday…. I was twelve years old. I stood in front of the bathroom mirror in the home I grew up in. There it was just under the nose on my face…. My very own mustache.

I could not wait to have my mom drive me to the drug store so that I could spend my hard earned allowance on Jolene’s cream bleach. Like a kid on Christmas morning I rushed home and ripped open the white and blue box with enthusiasm and vigour. I could not wait to slap this pungent white frothy shit on my face. I could not wait for the burning. I couldn’t wait for my eyes to water from the distinct bleach smell.

The moment itself holds fast in my memory to this day.

Life carried on from there. I moved from bleaching to waxing and back again. And then sometime just after the turn of the century I discovered the future.

I was working in Southern Alberta at the time when I found out that there was a new technique that could only serve to enhance my facial hair dreams.

One afternoon after clinic I rushed over to my neighbourhood plastic surgeons office. I lay down on a lovely clinical couch, donned my protective eye wear as a state of the art laser zapped away my Eastern European legacy.
Don’t let anyone tell you differently… it hurt like a motherfucker. Anyone who says otherwise has either never had laser therapy or is just plain lying. I’m a tough broad. This hurt. Enough said.

Twelve treatments later and you’d never know my old country roots. I even had my armpits done for good measure. And now every four or five months I go for a “touch up”.

It turns out that laser hair removal has as much of a legacy as my familial mustache.

Laser hair removal operates based on the principle that light is absorbed by dark objects, so laser energy can be absorbed by dark material in the skin (but with much more speed and intensity). This dark target matter, or chromophore, can be naturally-occurring in skin in the form of melanin. The laser targets the melanin in a hair follicle which gives the hair its colour and therefore damages the hair follicles preventing growth.

Since 1996, there have been numerous advances in hair laser removal that utilize melanin as a chromophore. All of the devices on the market may be used in patients with light skin and yield hair reduction near 75%.

The ruby laser, alexandrite laser, diode laser and Nd:YAG laser as well as intense pulsed light are commonly used devices for hair laser removal. Each varies in terms of the length of the wavelength of the laser used. As a rule… the longer the wavelength, the darker the skin.


A study published in the Journal of the European Academy of Dermatology in January 2006 looked at over 30 separate trials regarding the safety and efficacy of laser hair removal.

A total of 9 randomized controlled (RCTs) and 21 controlled trials (CTs) were identified. The best available evidence was found for the alexandrite lasers, followed by the ruby and Nd:YAG. Based on the best available evidence the study concluded the following:
1. Hair removal with lasers and light sources induces a partial short-term hair reduction up to 6 months after the procedure.
2. The efficacy is improved when repeated treatments are given
3. The efficacy of laser removal is superior to conventional treatments (shaving, wax epilation, electrolysis
4. There is evidence that exists for a partial long-term hair removal efficacy beyond 6 months postoperatively after repetitive treatments with alexandrite and diode lasers and probably after treatment with ruby and Nd:YAG lasers,
5. To date there is no evidence for a complete and persistent hair removal efficacy
6. The occurrence of postoperative side-effects is reported low for all the laser systems.

And so the dreams I had on a couch on the prairies in the middle of a Sunday afternoon football game burned away with a ruby laser as quickly as my hair follicles. Like every little girl it was time for me to grow up and face reality. I would never be that little white girl with a fabulous face full of hair. I would never have my very own mustache and a chin full of isolated black hairs. The bearded lady at the circus was a pipe dream…. It was time for me to to grow up don my protective eye wear and kiss my Jolene bleach goodbye.

No it would never be the same. I’d miss the mess and the smell and the maintenance but when a girl gets to take 700 nanometres of wavelength laser to her face in the name of self preservation she owes it to herself to join the new revolution. In Frida’s name. Amen.
Posted by Girlfriend's Guide to Health at 8:00 AM