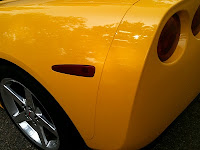 With summer comes sunshine and tan lines and open-air days. It also brings an unusual amount of twenty something men in automobiles they clearly cannot afford with stereo systems the size of a small American state.

Amidst the sun and the blue skies comes the smell of the ocean and fresh air. Never wanting to leave any of the senses behind comes what can only be described as hip-hop’s solution to the sonic boom.

Am I getting old, my dear girlfriends? Is it a sign that my youth is behind me when I walk through the streets to a car stereo blazing and all I want to do is to ask the lovely Jay-Z wanna be behind the wheel to “turn the damn noise down”!

Here I am strolling along English Bay and a Cadillac Escalade is stopped at the light with the latest Rhinanna song blaring as clearly as if “Miss Thing” were up on a speaker singing for God and Glory. The base is turned up to such a level in order to enhance my listening pleasure. Rest assured I can now HEAR and FEEL the beat as the environmentally sound vehicle zooms off to fulfill its higher purpose. It is now easily six blocks away and all I can feel is the pounding as clearly as if I had my own little Escalade right where my heart used to be.

Is this what P. Diddy, or Mary J or Alicia (Goddess of Goddess) wanted when they created their perfect art forms? Did they intend for Johnny or Janey come lately to take their “sweet wheels” for a ride, hubcaps spinning, light blaring and music as loud as gunfire for all the world to literally hear? Did they honestly intend a crack in the silence and the sound barrier that could be heard round the world?

Make no mistake, I am a huge fan and patron of the arts (my closet is proof of said endorsement) and I firmly believe in a person’s right to self-expression. There should however be some sort of rules of order when it comes to letting one’s freedom reign.

Rule number one: THE NOISE LEVEL:

If I can feel your car music coming before I can see your car. Turn the damn tunes down.

Play it loud and play it proud. Hell, sing along if you must. But the world is NOT your living room and just because you are in the safety of your own automobile does not mean that the windows must be open and 21 guns blazing. The intersection on Robson and Burrard is not the time and place for your own personal rock concert.

When choosing what genre of music to blast on Daddy’s car stereo, ask yourself the following questions,
1. What does this song say about me as an individual? Do I want the world to know that I know all the words to the latest TIMBERLAND manifesto?
2. Is my affection for country music something I want to truly advertise?
3. Given what Brittany Spears has done for humanity, should I be blasting her greatest hits album to the masses, or is she better left to the privacy of my bathroom?


The human ear is divided into 3 parts -- the external, middle and inner ear. The inner ear is located inside the skull and is quite frankly the ear’s “business end”. It is the most complex part of the ear. The soft tissue of the inner ear is made of different types of cells and nerves, all arranged in a pattern on a thin sheet of tissue. Noise induced hearing loss results from damage over time to the nerves and cells of the inner ear. Piss the inner ear off too much and you will get permanent hearing loss.

Whether noise harms your hearing depends on the loudness, the pitch and the length of time you are exposed to the noise. The loudness of a sound (measured in decibels, or dB) and the length of exposure are related. The louder the sound, the shorter the exposure can be before damage occurs. For example, 8 hours of exposure to 85-dB noise on a daily basis can begin to damage a person's ears over time. Using power tools (at about 100 dB), listening to loud stereo headsets (at about 110 dB), attending a rock concert (at about l20 dB) or hearing a gunshot (at 140 to 170 dB) may damage the hearing of some people after only a few times.

According to the Centre for Disease Control an estimated 17% of people ages 16-60 have experienced some form of permanent noise induced hearing loss. How many of them experienced said loss at the hand of a car stereo remains one of life great mysteries.

A study published in the American Journal of Industrial Medicine showed that the average sound level in a music club (or a bar) was 95-107 decibels well in the range for permanent hearing loss. 76% of club employees tested at 8 different clubs experienced some form of noise induced hearing loss.

A further study published in the Journal of the Canadian Family Physician in 1993 took 22 volunteers to a rock concert. Their hearing was tested before and after the concert and at 10-minute interval throughout to determine how long an exposure would be dangerous.

The study also placed the participants at different locations throughout the arena to determine where the “danger zones” would be. Interestingly it was NOT the group closest to the stage that received the highest exposure to noise. The study does not site where this group was sitting. However all participants in the arena received at least twice the accepted dose of noise (at least 240 decibels). The study went on to show that after 7 minutes of exposure the participants hearing began to decline with 12% experiencing residual effects to hearing loss 14 days later.

A car radio at full volume puts out about 170 decibels. This is almost twice the noise any ear will tolerate. If I extrapolate from the ROCK CONCERT DATA, that means that “Johnny Drive Loudly” needs about 10 minutes of Lady Gaga blasting on the radio every night for two solid months before he’s got a one in 10 chance of yelling “what?” for the rest of his life.

Multiply this by the numerous rides I am sure said DUDE takes around town on such a perfect summer night and I am ever so glad that my tax dollars may someday pay for his hearing aid. It’s the least I can do to repay him for sharing his “Top 40” with me on a regular basis. And alas another week ends and begins with me knowing that Karma is alive and well and living on the streets of Vancouver.
Posted by Girlfriend's Guide to Health at 11:06 PM