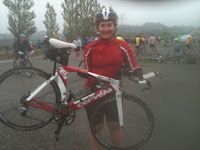 I've been thinking a lot about heroes lately. Not the ones in the fabulous tights with the caps and mysterious identities but the average men and women who inspire us to be better... The everyday dudes that just happen upon a miracle and make it right.

This weekend I rode 250km to raise money for the RIDE TO CONQUER CANCER. There I was with 2235 men and women of all sizes and ages, of all fitness levels each with a motivation of some kind in order to just DO this. There was something in this weekend that was insiring them and motivating them for more. They were in search of a hero in their life- a means to be inspired and POOF! somewhere around kilometre 200 they each grew a superman magic cap and became something more than themselves.

It was inspiring to watch teams of people get together in the name of a loved one or a perfect stranger and make the world right for just a moment.

I met a group of riders from a group called "TEAM FIN". They were over 100 strong and had raised over a half a million dollars as a team for cancer research.

Finn was a little boy who loved life. Finn was diagnosed with a rare form of cancer called rhabdomyosarcoma at 20 months of age. Finn's treatment included multiple surgeries, chemotherapy, radiation and countless hospital stays. Three months after his last cancer treatment Finn was found to have a recurrence of his cancer that was ultimately incurable.

Since Finn's death in October 2008, his parents have been focused on keeping Finn's spirit strong. Finn laughed and played. He was a little boy with a big spirit. His father decided to establish TEAM FINN last year in the first RIDE TO CONQUER CANCER to honour his son's memory and to try and turn on a light in an otherwise blackened place in life.

And so TEAM FINN was born. In their pink jerseys with s sense of whimsy and fun they were a lesson in hope.

Make no mistake dear girlfriends, I am not naive enough to think that one day cancer with be off the face of this earth. But in those moments and along those miles with a "Finn" at my side, I thought of a time when we turn adversity into opportunity; when we teach life to dance and run and play; when we "bitch slap" sorrow and don't accept the status quo.

I have no medical research for you this week my cyber sisters... only a message with a bit of a medicinal slant...

If life really is all about the journey and the destination is unknown... this weekend I got a glimpse of a ride that was full of hope and laughter and everything that is good in humanity. And guess what? I liked it. I liked it alot.
Posted by Girlfriend's Guide to Health at 3:00 PM