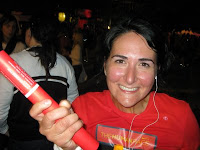 It truly has been a whirlwind of a week with many a topic to discuss. A blog can inspire and inform. An opinion can influence and reflect. This week, permit me if I may to send a cyber "shout out" to a nameless man who stood on the sidewalk on Sunday morning at English Bay and watched 55,000 people run by him as he clapped his hands and cheered us on.

It was the Sun Run, Canada's largest community race and I was one of the many who was chasing a dream. It was somewhere around kilometre 6 that energy was fading and the inspiration I had at the starting line was a distant memory. As I rounded the turn out of Stanley Park and headed towards the Burrard Street Bridge I felt as though I was ready to sit down on the curb for a latte and a nap.

It was then that my eyes met a perfect strangers. He was adorable in a perfect "American Eagle" kind of way. He was too pretty for words and possessed 4% body fat. He did not run in the race. Instead he stood on the sidelines and cheered us on. The sun was out and it was a perfect Vancouver summer day. His hair shone in the morning light, his highlights (gleaming with the force of a thousand solar panels) were that perfect outdoorsy beautiful. HE WAS Mountain Equipment Co-op. And just when I thought this running health bullshit thing was killing me, he gave me a thumbs up and yelled,

And that was all I needed. Yes, this was just a perfectly fit stranger cheering for the chubby chick in the race. Yes, this man could spot a stylish runner from a hundred metres. My outfit was fabulous and it was English Bay. This man knew a fabulous visionary when he saw one. Perhaps he was just picking someone out from the crowd and making my day. Perhaps I was dehydrated and likely had low blood sugar. But none of this mattered. I was a woman who needed a fan. I was a runner who needed a crowd. I wanted to "show off" and this was my moment to shine.

I may be built for comfort and not for speed but in that split second I was a goddess tastefully dressed in a black running outfit. The duckling was a swan. My feet grew wings and for the next 4 kilometres, I was a well dressed gazelle who was born to run.

I know not the identity of this nameless cheering man. I will likely never meet him and thank him for the seconds of significance he posed in my running life. Like many things in my life I am being far too dramatic about the role he played. But the moment made me think about the significance of a "fan base".

Do we do better in life with our own "cheering squad"? As a doctor I spend much of my work life motivating patients to embrace healthier lifestyles. For all intensive purposes I am their nameless stranger in English Bay, cheering them on as they run the road to healthy changes.

A German study published in the International Journal of Sports psychology examined a set of rugby teams' performances based on the reactions of the crowd. Sports performance and spectator behavior were recorded simultaneously with video cameras during four home games and then judged by raters. Spectator behavior (support vs. no support) was observed before and during each down (or play). Performance within each down was rated as positive or negative. After analyzing 631 downs the research team concluded that there was no indications that supportive spectator behavior such as cheering before a down had any influence on subsequent performance.

A further study done out of Sweden showed that when individuals are cheered for (instead of a team) the results are in fact the opposite. In fact when individuals were "singled out" and encouraged, they did better.

Teams of medical literature confirm the benefits of a good patient-physician relationship as playing a significant role in patient's well being and compliance.

Could Oprah be right? Do we all just want to know that we matter? Was the fact that I was singled out exactly what I needed to finish the race? Does the same apply to my patients?

Ultimately my interaction on Sunday was a seemingly insignificant event. It was a split second in my life. A flash of encouragement from an adorable stranger that was nothing like the daily support I receive from the people in my life who know me and love me.

I could have brushed it off as a passing moment. Instead, it made me want to be better, do more, run faster. Blame it on the sunny day or the perfect sky or the Abercrombe and Fitch catalogue good looks of a stranger.... but that moment was a metaphor for life.

Things move fast and time races by. Sometimes we want to sit down on the sidelines and have a latte and a nap. All it takes from time to time is a little encouragement. Once in a while the true moments that define us are the ones witnessed and supported by a perfect stranger.

Whether we're a patient in a doctor's office a worker bee or a wanna be athlete with a 10 kilometre personal best, don't we all just want to hear that perfect sentence once in a while,

Posted by Girlfriend's Guide to Health at 6:59 PM