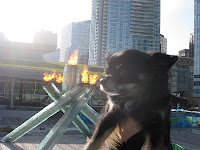 I have or shall I say, I HAD great black hair. I have the kind of hair that many women pay a lot of money for. This is not a shameless boasting. This is plain fact. This is not all it is cracked up to be. My hair is huge and takes a good 20 minutes to wash and condition. With a blow dryer I can have it dry in 20 minutes. Given the 40 minute production I really am the woman who stays home on a given night in order to wash her hair. In short it is like having a child.

Last week I did something truly new for me. This was not a pursuit for a blog topic but rather a near 40 year old woman’s time to cover her grey once and for all. My hair in homage to my mother’s side of the family had decided that “salt and pepper” is really the way to go.

This has been going on for easily the past 5 years. However, I always felt that a bottle of drug store hair dye was easily the economical and practical choice. When your hair is black- it is easy to repeatedly match things up between dye jobs.

This was until someone gave me a gift certificate to Suki’s hair salon and my new job (more on this later) necessitated a slightly less harsh hair colour.

Off I went to cash in my generous gift and transform my locks from raven to auburn?

I met my very first colourist. His name is Jeff (name changed out of creative license) and he really is lovely. Thirty plus years in the industry. He grabbed a fist full of my hair and immediately pronounce that I needed my store bought layers removed. This would according to my experienced new dye guru give my hair a sense of life that years of blackened pharmacy isles had tried to push away.

Let me preface this by saying that when it comes to beauty I AM A PARADOX. I have no hesitation dropping a mortgage payment on a handbag and a pair of fabulous French footwear. I will easily spend twenty plus dollars on mascara and when it comes to skin care products I seriously believe that the more expensive the product, the better. However, when it comes to hair and nails…. I am frugal to a fault.

I buy the cheapest black dye out of the logic that all shades of black are equal. I never have my nails done professionally because my lack of logic reasons that it is in fact a waste of money.

You see…. My purse can be amortized over 3 years. Hair grows and nails chip so the six or seven lattes I could buy for the price of one manicure is in my mind not worth the money. I understand that many people like the hand and scalp massages that come from a professionally trained manicurist or colourist, but I DON”T LIKE TO SIT STILL.

Seriously, my trip to the colourist involved an Ativan as well as a gift card. Four hours in a seat that does not have bike pedals attached to it requires me to be medicated. Enough said.
According to my research, permanent haircolour is the only way to dye dark hair into a lighter shade, and it must be done in two parts: First, the hair is lightened, then color is applied.

Colour is removed by wither bleaching or stripping with a colour remover. Then a permanent haircolour is applied to natural hair and diffuses the natural pigment molecules within the hairshaft, splitting them apart to make room for the artificial pigment (from the hair color) to attatch, forming a new color chain.

Earlier studies have linked permanent hair dyes to bladder cancer as well as to non-Hodgkin's lymphoma.

The research team led by Dr. Zheng, found no increased non-Hodgkin's lymphoma risk in women who began coloring their hair after 1980. In 1979, the hair care industry drastically changed the formulation of most hair dyes to remove known cancer-causing agents.

Another population-based case-control study was conducted in Los Angeles, California, and published in the International Journal of Oncology in December 2000. It involved 1,514 incident cases of bladder cancer and an equal number of age-, sex- and ethnicity-matched controls. Information on personal use of hair dyes was obtained from 897 cases and their matched controls.

After adjustment for cigarette smoking, a major risk factor for bladder cancer, women who used permanent hair dyes at least once a month experienced a 2.1-fold risk of bladder cancer relative to non-users. Risk increased to 3.3 among regular (at least monthly) users of 15 or more years. Occupational exposure to hair dyes was associated with an increased risk of bladder cancer in this study. Subjects who worked for 10 or more years as hairdressers or barbers experienced a 5-fold increase in risk compared to individuals not exposed.

And so I am now more worried for Jeff my lovely colourist than I am for me. I will undoubtedly return for a “touch-up” in 6 weeks so that my black and grey roots can once again match the perfection that Jeff has created.

But before I take my Ativan and hunker down for what a part of me will consider to be “a silly waste of money”, I’ll be sure to mention to “Jeffrey” to have his bladder checked once in a while?
Posted by Girlfriend's Guide to Health at 7:43 PM