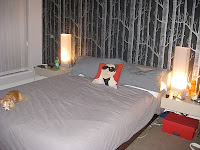 I spent the good part of yesterday lying in bed watching downloaded television and drinking diet Pepsi out of the can. After 9 hours, a full series of Cougar Town and a six pack I removed myself from the bed to shower, change pajamas and return for a restful night’s sleep. This “lay like broccoli” experience happens perhaps once or twice a year. No I did not have the flu. I was not even a little feverish. There was no cold, no depression, no premenstrual syndrome looming. It was a perfectly good Monday and I was just fine.

Ever an active woman I am not prone to engaging in behaviour where the risk of bed sores is involved however, sometimes I can help but spend a good twenty four hours “resting up” in every sense of the word.

Isn’t it funny how we only confine ourselves to pajamas and hours of television and fizzy pop when we have the flu? Isn’t it sad that such a heavenly experience has to be had when we feel so physically bad that the sense of loveliness and laziness must be wasted on a fever, chills and rigours? Why did I have to have a viral illness before I could enjoy an entire reality television series from start to finish? Did I have to wait until I verging on pneumonia or be thoroughly depressed before I could spend $35 on a year’s supply of TV and liquid aspartame?

According to the Hartford Time Off Survey done on 91,730 Americans in the work force and published recently in April, 2010, 73% of America’s working force felt stressed.

Conducted in February 2010, the joint survey by The Hartford and ComPsych found younger Baby Boomers, ages 45 to 54, are carrying the largest burden of family care responsibilities, with more than half saying they've taken time off from work to due to their caregiving responsibilities.

More than 80 percent of Baby Boomers said they feel moderate to high levels of stress related to the care or support they are giving to children, spouses and/or parents. More than three-quarters of Baby Boomers reported taking up to 16 hours of paid vacation time to care for another person.

There is little evidence to date about the benefit of my kind of day off; the day where the rest of the world WILL JUST HAVE TO WAIT, DAMN IT, while I let my toenails dry and the dust of my life settles. But the evidence is mounting about how being EVERYTHING TO EVERYONE is killing us.

Maybe there is no balance. Maybe we’ll never decrease the work loads of our lives. But wouldn’t it be nice amidst any emotional shit storm to have one or two days of peace and quiet every few months? Just so we could “Reduce, Reuse, Recycle” so to speak?

And so every once in a while, I get out of bed, shower, change and put on a fresh pair of pajamas. I stock up on diet Pepsi and catch up on bad TV. I take all my meals in bed and screen all my calls. I spend 24 hours hibernating (here’s to the 3 bears metaphor) until I can’t stand to sit still any longer.

It is then that I emerge from my little self indulgent cave and face the world again. As far as solution go…. It’s self indulgent, glutinous, antisocial and quite frankly…It’s pretty fabulous.
Posted by Girlfriend's Guide to Health at 9:24 AM