How Does God Take Her Coffee? 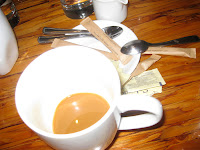 Here is a thought… Wouldn’t more people attend church/synagogue/mosque regularly if their local house of worship served coffee? There I was in a card carrying agnostic sitting in a synagogue last Saturday morning. It was 9:45 in the morning and brunch was nowhere in sight. My mother stood up on the “bima” (the stage) where she was being honoured in front of her community for celebrating her 70th birthday. The rabbi was saying some lovely words about this woman of valour and all I could think of was “why can’t I drink a coffee in here?” Wouldn’t religion be much better served if they had a little late cart just outside by the prayer books and skullcaps? You could help yourself or even order up the perfect Americano... all while you sat in a lovely comfy pew. While worshiping the God of your choice can't you drink from the nectar of another?

Admit it, the thought is somewhat unconventional, perhaps even disquieting but quite frankly I AM ON TO SOMETHING. In fact, I think the problem with prayer is their marketing. Bookshops have adopted cafes, as have movie theatres, airports and luxury retail outlets; should churches be far behind? You can have your late while you buy your Louboutins. Why not mix a macchiato with Mass or Musaf or Mosque?

All this sitting in a house of worship made me wonder about the scientific evidence was for prayer. Now let us pause for a moment, as I understand that I am now entering the unholiest of unholy. I am about to find scientific evidence to support or refute FAITH. I am aware that by definition FAITH does not need science, in fact it is by its very nature a pure leap away from scientific dogma. By our very beings that which we cannot prove, we believe. This is my disclaimer should I be banished to hell for writing this or worse… should my mother be reading my blog.

According to the scientific data there are three different types of studies involving prayer. The first is known as first person prayer, where one prays for oneself. It is widely accepted that prayer can aid in recovery, not due to divine influence but due to psychological and physical benefits. Many studies have suggested that prayer can reduce physical stress, regardless of the god or gods a person prays to, and this may be true for many worldly reasons. A study published in Gerontology in 2001 looked at 256 patients aged 65 and over awaiting cardiac surgery. The study prospectively examined outcomes post surgery and one of the variables they looked at we if the patients prayed for themselves. Although there was no correlate with outcomes, patients who prayed were deemed to be more optimistic going into surgery.

The second type of prayer is when someone prays over you (think “DEMON BE GONE!!”) in a sort of “heeling hands” type of method. A 2005 study published by The Journal of Alternative and Complementary Medicine alleges evidence that eleven healers sent thoughts at a distance and were able to remotely influence the MRI-measurable brain activity in chosen partners who were physically and electrically isolated. Unfortunately this study has never been reproduced.

The third type of prayer studied is the most common and is called Third Party Prayer. This is where people pray for another person’s well being. Regardless of religious denomination, everyone has this. From Catholics to Buddhist, from Mormon Prayer circles to Mecca we all have some way to hope for someone’s well being. Even the best atheist among us has hope for her fellow sister’s health and welfare. Third party prayer has evidence on both sides.

The largest trial to look at Third Party prayer was The STEP trial (Study of the Therapeutic Effects of Intercessory Prayer in patients undergoing coronary Bypass Grafting) published in the American heart Journal in April 2006. The study involved over 1800 patients having Coronary Bypass Surgery and randomized them into three groups.
Groups one were patients who were being prayed for by others but the patients were told that there was no certainty that they were being prayed for.

Group two were patients who were NOT being prayed for by others and were told that there was no certainty that they would be prayed for.

Unfortunately, the group that were prayed for and were told as such did the worst in terms of 30-day mortality and complications. In terms of any kind of complications anything from an infection to death the rates were 52.5% for group 1, 50.9% for group 2 and 58.6% for group 3.

But my dear girlfriends, ever the optimist (I have to be…. Skinny jeans are back in style) I will leave you with one thought….

In 15 years in medicine I have seen two patients literally come back from death after receiving “last rights”. One was on Christmas Eve 2002; the other time was Easter 2010. On this last occasion, I had told the family that their loved one had a catastrophic stroke and would never recover. The CAT scan confirmed my worse belief and the patient was in a comma. His family prepared for their ultimate nightmare and the priest came in and administered last rights.

Two hours later while we were moving the man to the bed in the ICU he woke up and asked for a drink of water. Hand to heaven… no word of a lie.

Make no mistake, I’m as good a cynic as the best of them, but both of those occasions made me believe for a fraction of a second; not in a god with a name… but in something more than science and myself.

Now if only I could get a good latte in a house of worship I might REALLY join the flock…
Posted by Girlfriend's Guide to Health at 3:00 AM