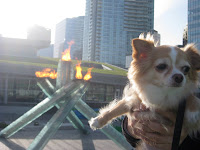 In the spirit of this season of renewal and rebirth, I thought I would take a moment to reflect upon that little thing called plastic surgery. I saw one of my cousins last weekend (shout out to her if she’s reading) a fabulous red head with a fabulous life. She is smart and funny and beautiful and I am not just saying this because she reads GGTH religiously.

She had gotten a new haircut. A great shag cut with just the right amount of bangs. They grazed her forehead in the perfect way and “fell just right”. I remarked at how much I loved her new hair and she responded mater-of-factly, “ It was either bangs or Botox and I chose the bangs. “ she said lifting her hair above her forehead to reveal only the slightest laugh lines.

No judgement here. I myself no longer have naturally brown hair. My chocolate locks really do come from a box. Like my mother, I started to go grey at 30. Unlike my mother, I stopped going grey about a week later. Where my dear mama sports a fabulous plume of salt and pepper, I get my brown locks in the colouring isle at the local Shopper Drugmart every 3 weeks.

At $10 per bottle for the last 10 years, I have spent more than a mortgage payment fighting my age. Could Botox be far behind?

Sure my but could be smaller and my boobs could be bigger. I hate my nose and the more weight I lose the more my face and neck could use a lift. Vidal Sassoon himself could not hide the fact that years of sleep deprivation have created shadows under my eyes that even the best cut and colour could not hide.

Make no mistake, some of my BEST FRIENDS are Plastic Surgeons. It’s a great field of medicine that really has, like other areas of medicine been used for both “good” and “evil”. I once came close to having liposuction but when faced with the pain of having someone take a scalpel to my ass found my inner coward and hired a personal trainer instead. It turns out my ass still endured hours of suffering and I do not have the scars to prove it.

And then it happened. Last month an aquaintance invited me to a “Botox Party”. There in the comfort of someone’s home I would pay an entrance fee to have my face “shot up” by a community college graduate and a syringe of botulism A toxin. The age of renewal was in overdrive.

On April 30, the Food and Drug Administration in the U.S. approved the use of Reloxin as both an anti-wrinkle treatment and for treating spasm of the neck muscles. The cosmetic version Reloxin known as Dysport should be available in the U.S. within the next month or two. According to some studies, the newer Reloxin may last longer and may cost less since more dilution can be done in the reconstitution process (whereby a certain volume injectable saline is mixed with the purified toxin prior to injection).

Others say the two substances are not interchangeable since Reloxin may have a tendency to disperse into surrounding muscles and affect their function in a different way than Botox.

The same day the FDA approved Reloxin, it ordered the manufacturers of botulinum toxin injection products to add black box warnings - the agency’s strictest safety alert - to their labels regarding their risk of potentially life-threatening complication when the effects of the toxin spread far beyond the injection site.

According to the FDA, such an occurrence can cause symptoms similar to those of botulism, including unexpected muscle weakness, hoarseness, trouble breathing, difficulty swallowing, double vision, blurred vision and drooping eyelids. The agency said such symptoms have mostly been reported in children with cerebral palsy being treated with the products for muscle spasticity, an unapproved use of the drugs. Symptoms have also been reported in adults treated both for approved and unapproved uses.

The new warning label will apply to Dysport, as well as Botox and its variations. Botox is approved for the the treatment of wrinkles as well as the treatment of severe underarm sweating (primary axillary hyperhidrosis), crossed eyes (strabismus), and abnormal tics and twitches of the eyelids (blepharospasm). From a cosmetic perspective, Botox has been approved for dynamic glabellar wrinkles, forehead furrows (frontalis muscle) and crow's feet (lateral orbicularis oculi muscle).

2.5 million injections of Botox were performed in the US in 2008, making it the most popular cosmetic treatment that year. Reloxin and Botox Cosmetic must be injected by trained professionals with an intimate understanding of the anatomy of the face. Untrained injectors and injection of copycat or bootlegged, FDA-unapproved products are a major concern.

I have another cousin who is like a sister to me. I would do just about anything for her. She would like me to take a few weeks off from my practice and do a “Fresher Course” in Dermablend fillers and Botox so that I can inject her face regularly at cost. Despite my love for her (which known no bounds) and my thirst for knowledge, I don’t think it will ever happen. I am glad, however that there is now a cheaper option for her which is equally safe of administered by a trained physician.

As for my party invite… I RSVP’d no. Yes, Botox is a safe prodyct if administered by a trained professional. If I ever do decide to “turn back time” I will do so in the comfort of my Dermatologist’s office and not at a girlfriend’s cocktail party. Until that day comes, Bangs before Botox… It has a nice ring to it.
Posted by Girlfriend's Guide to Health at 7:49 PM