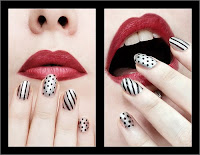 I bite my nails in a way that is truly offensive. Truth be told, I come by it honestly. My mother bites her nails as well. I can remember as a child her perfect long finger, with elegant fingernails polished to perfection. She sat in the front of the 1975 Oldsmobile cutlass while my father drove. She chewed on her cuticles as if she was manicurist on a mission.

And now more than 30 years later, I chew my hands with a vengeance. It used to be a nervous habit and now it is just routine. I have tried everything. I have tried bitter nail polish and gloves, acrylic overlays and weekly manicure. I have bitten through it all like a fanatical rodent.

My nails have born the brunt of every nail fad known to women. In the 1980’s I wore Lee Press on Nails. They were plastic nails that were self-adhesive and pre-polished. They came in a variety of colours and sizes and promised in a half an hour to transform any hands into movie stars.

My Press On’s were not available in Canada and were thus bought typically on trips to the United States with my family. We drove from Winnipeg, Manitoba to Fargo, North Dakota (it was 1983- there was little else to do for fun) and there in a Target I was introduced to the fabulous world of fake nails. I could bite my fingers to my heart’s content and within 30 minutes in the safety of my hotel room, my nails could instantly be polished and perfect again.

There I sat in the Holiday Inn in Fargo packet of LEE PRESS ON’s in hand anticipating the magic. I looked down at my stubby, bitten nails and imagined my long perfectly polished future.

Make no mistake; my future was perfectly polished, but lasted only 12-14 hours. The nails rarely stayed on for longer than THAT day and were no match for the chlorine content at the Holiday Inn pool. I loved my nails, but I loved the water slide even more.

In the 1990’s I fell victim to the craze of the Acrylic French Manicure. These fake nails are now popular among the adult film industry stars and Intensive Care Nurses in Alberta. This is not an association but merely an observation.

I spent most of my 20’s in the hands of various women of Vietnamese descent as they painted my nail beds with acrylic based products in pink and white in order to mimic a French manicure. They then took what can only be described as miniature bench saw to may nails and sculpted them into my own Sally Hansen advertisement.
My chewed up nail stubs were replaced by perfect long nail beds that smelled like acetone and looked like a dream. I was on a contact high from the chemical fumes and deliriously happy from the visual effects.

But when the look and the fumes wore off, my sober self bit through the acrylic and the pain like a beaver from hell. Ten days and ten fingers later and I was back where I started.

Now another decade has passed. CHANEL comes out with a new nail polish every season that is the “must have” of the moment. Each winter I paint my nails a dark blue or black or red and promise to stop biting. I last a week perhaps two or three and the polish is gnawed upon over and over again. I make resolution after resolution and each one is broken as I bite back my promises... one finger at a time.

In spring I paint my nails a pale pink or pearl or nude colour and at $20 per bottle; the promise is renewed. I have paid for Karl Lagerfeld’s car with the amount of CHANEL nail polish that has been purchased in an attempt to banish my bad habit and to no avail.

A study published in 1971 in the Journal Of Child Development and Neurology showed that there may be a genetic component to nail biting. According to the authors, nail biting is a frequent habit in children. It usually appears between 4 and 6 years of age. About 35% of children bite their until puberty when the rates increase to 40-45% of adolescents. The majority of nail-biters give up the habit during their teens and it is only occasionally observed in adults.

The habit is markedly familial. In a large percentage of cases a history of nail biting during childhood by one or both of the parents can be obtained. It has been suggested that the children learn to bite the nails by imitating the parents, but this cannot be the case since parents usually stop the habit before their children are born.

This points to more than a learned behaviour because logic would argue that fraternal twins would both learn the same behaviour.

Spring has come once again. I have bought CHANEL’s now sold out colour (it is a puke brown but apparently fabulous) and have piled on the paint and the promises once more. My genetics will conspire against me as soon as I finish typing and I will stare at my fingernails with wanton abandonment in preparation for my next chew….

And now, I only have my mother to blame….
Posted by Girlfriend's Guide to Health at 12:43 PM