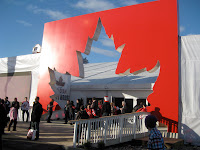 It's official. I have Post Party Depression. I am a resident of Vancouver. I live two blocks from Robson Square and I miss the drunks who took to the streets with spontaneous bursts of Oh Canada. It was sixteen glorious days that even the greatest cynical minds (yes Britain I am talking to you) could not put a damper on.

And now, the crowds have pulled of their red hockey jerseys and red fluffy mittens. My sixteen fabulous Olympically themed outfits are now back integrated into everyday pieces in my wardrobe as if nothing ever happened. The cauldron is out and I wear my patriotism back on the inside. My make up is again tasteful and there is no maple leaf temporarily and artfully tattooed on my cheek like a diamond of pride.

I have stopped drinking beer before noon at hockey games. I have stopped drinking beer completely. I have no interest in hockey. I was never a hockey lover. As a child my father told me it was "fighting on ice", and somehow that stuck in my head. But the Olympics brought out the hockey lover in me. There I sat at a game or on my couch or even in a Sports Bar (there is a first time for everything) watching our boys play for glory. I knew them by name and number as easily as if I had been fed the sport my whole life long.

I sat glued to speed skating as if my life depended on it; screaming at a television as frantic as if I was at a sale at a Prada outlet. I wore red and sang my national anthem in the streets. I watched Ball Hockey games played throughout the streets of Downtown Vancouver at all hours of the night and I yelled "CAR" just for the hell of it.

I "high fived" drunken twenty somethings on Granville Street, where previously I would have admitted them to hospital, judged them accordingly and let them sober up in Emergency before sending them home with a superiority speech and a prescription for Tylenol.

I met Lloyd Robertson in the street and he stopped to say hello. I sent my Beloved downstairs to the Starbuck's one morning and he came back with a coffee and a picture of himself and Queen Latifah. I watched Michael Buble run the Torch over the Burrard Bridge and had the best girl cry on record when K.D. Lang sang at the opening ceremonies.

I danced like a teenager with my childhood friend in a Mosh Pit at BC place while Burton Cummings belted out an encore that no one asked for but everyone wanted. I apologized with pride in being truly Canadian. I wept and I laughed and I sang and I loved it all from ceremonies to sports to the noise in the streets.

Mostly I just loved my city and the friendly way the world looked for 16 days in February; when optimism rained supreme and anything was possible. I have Post Party Depression. I imagine this is a common manifestation of extreme anticipation, extreme joy and then a resumption of regular life. I am sure there is an article somewhere about it but quit frankly I'm a little blue and I did not feel like looking into it.

I know small sorrow will pass eventually and I will drink in regular life again, enjoying its sweetness once more. But for now I sigh a little bit at the fact that there was "two weeks of wonderful in a lifetime of nothing special".

And now, I am back in my coffee shop. There is now always a table available and the much smaller line is easily tolerable. The latte is still fabulous, but there is no maple leaf design in the foam. The streets are a little quieter and the cars pass by with ease. The Paraolympics start on Friday and I know it will not be the same, but perhaps I'll get another glimpse of all things glorious. I am counting on it.
Posted by Girlfriend's Guide to Health at 7:36 PM