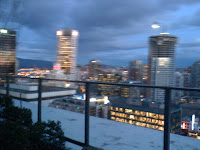 I’m sleepy. I can feel my eyes shutting at about three in the afternoon on a daily basis. It has come to the point where I can now set my watch by my yawns. Coffee helps and on certain days it becomes a mandatory means of maintaining consciousness.

I love sleeping. I try to get eight hours a night at least. In fact I would argue that I am somewhat militant about my slumber. At almost 40, I still have a bedtime. My friends will attest to my almost seniors attitude towards this. I like to be in my pajamas by nine and spend the next 30-45 minutes in a getting ready for bed ritual.

I wash my face, pick out my clothes for the next day, read, surf the net, watch television. By ten o’clock, I am usually out cold. It is my favorite part of the day.

Yes I will try and stay up later on weekends. But it has become less and less of a thrill. I LIKE going to bed early. I LIKE getting up early. Given my love for rice pudding and green jello and old movies I will make one hell of a seventy-five year old woman.

I remember when I was a kid never wanting to go to bed. I can close my eyes and see the scene in my bedroom. It was a summer night in 1978. I was seven. It was nine o’clock at night and still light out. I could hear the older kids still playing in the streets and how I envied them. There was this massive sense that I was missing something.

And now more than 30 years later… I can’t wait for 9 o’clock to come so that I can go to bed. I love the summer months when the light streams in my bedroom window as I am falling asleep. When the windows are open and I can hear the perfect summer night on the streets below. I can smell the ocean air and hear the city life as I drift off and let my brain literally unplug from this world.

Perhaps it’s the job. Maybe medicine has robbed me of a proper “sleep-wake cycle”. Could years of being woken at all hours of the night have fully derailed my brain so that I now have a justified and somewhat self diagnosed sleep disorder? Could it just be that as we age, we like to sleep more? Or could it be the ever present argument that one always wants what one does not have?

I rise easily in the morning. I am not one of those people who hits the alarm several times and contemplates calling in sick between each snooze button. I don't jump out of bed with a swing in my step, but sometime around six am, I wake up without an alarm and try to take on the day.

The days are full and overall quite good. There are the amazing days which you wish would never end. The days that are perfect and life is truly technicolour and you stop for a moment and hope to freeze things in your mind's eye for a time when things lack such high definition. We all have handfuls of these days from morning to night when sleep seems like an unwelcome end and we're eight years old again listening to kids play in the street envious that a perfect day has ended without our input.

Then there are the less than perfect days; the terrible days; the days where the world shits on me and all I want to do is go to bed early. I come home from work, put on my pajamas at 6:30pm and crawl into bed. I skip dinner, take a sleeping pill (if needed) and fall asleep.... and the shittiest day ever is officially over. This is my solution for the unnecessarily awful days that plague us all. I am aware that this pattern of behaviour may be somewhat unhealthy. It may constitute avoidance of the world in which we live. It may be sad way to escape my troubles. But it works for me and no one gets hurt. Enough said.

The mortality risk associated with different sleeping patterns was assessed by use of the 1965 Human Population Laboratory survey of a random sample of 6928 adults in Alameda County, CA and a subsequent 9-year mortality follow-up. The study was published in Sleep (yes it has a journal!) in 1985 by Dr. Winograd and associates. The analysis indicates that mortality rates from heart disease, cancer, stroke, and all causes combined were lowest for people sleeping seven to eight hours per night. Women who slept less than six hours or more than nine hours had 1.6 times the total age-adjusted death rate of women sleeping seven to eight hours per night.

The comparable relative risk for men was 1.7 times the death rate. This increase in mortality rate was found to be independent of self-reported trouble sleeping and self-reported physical health status at the time of the 1965 survey. When the study adjusted for age, sex, race, socioeconomic status, physical health status, and a variety of other risk factors the increase in death rate became 1.3 times more for people who slept less or more than seven to eight hours.

And so science strikes again. My coffee is good for me. My shoes will not kill me and my pajamas will indeed save me from a stroke. I would continue this discussion further, but to coin a cliche... it's almost my bedtime. If you need me, I'll be upstairs washing my face, brushing my teeth, picking out my outfit for tomorrow and getting ready to save my life for the next seven to eight hours.
Posted by Girlfriend's Guide to Health at 6:09 PM