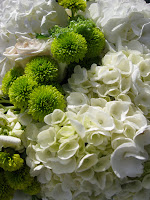 What does one do about that one person in your life who inevitably wears too much perfume? Normally one would think this is an age related phenomenon. People turn sixty, lose their sense of smell and pile on the fragrant, flower like (and for lack of a better word) toilet water in such a way as to make eyes water and children squirm. It is such a distinct scent that inevitably we all have one person in our lives who wears it. It is as if this very perfume entices its users to "pile it on". I have encountered several patients in my practice who have engaged in such a noxious crime.

In fact... true story (hand to heart) I was called to a cardiac arrest once where the patient went into anaphylactic shock and stopped breathing all because her room mate in the hospital beside hers had a visitor who was wearing too much perfume. As I rushed into the room to intubate the woman and perform CPR, I could smell the evidence everywhere. There it was, lingering... my elementary school singing teacher. The scent hit me and I was back in the back of a classroom somewhere on the prairies trying to hit a high C, eyes watering, stomach reeling.

We all have it. A person in our lives who piles on the scent and none of us are brave nor brash enough to ask them to put down the bottle and step away from the perfume counter at Sears.

Mine was Mrs. K (she has long since passed away and I am sure that she is not reading this blog.... nonetheless her name has been changed)... She was my Grade 3 music teacher and although she was a lovely woman (if memory serves me correctly) she smelled like rose toilet water. You could sniff this woman half a kilometre before her arrival. It was not only the potency of her scent but its distinct nature. She was the perfect mix of rose water, Coty cheap perfume and a really nice, high end nursing home rolled into one fierce spray from a bottle that no doubt had an atomizer attached.

I loved singing class. It was MY American Idol moment (before there even was an American Idol).... Singing class in 1979 was the only Karaoke a little diva girl had and it was the best part of my school day. But for all the songs in my heart, there was the, well, the smell of Mrs. K and her Rose Water Grail water which would make my eyes water with each note. If not for the fact that she let me sing the entire scores from A CHORUS LINE, CABARET and JAQUES BRELL IS ALIVE AND WELL AND LIVING IN PARIS (I was a strange child... but I LOVED that musical), I would have skipped the classes all together. But despite the roses, I could not resist....

Truth be Told, every time a person passes me by and the smell of their perfume lingers long past their footsteps, I think of Mrs. K and A CHORUS LINE and I am back in that broken down 1970's parochial classroom belting out "If We Only Have Love (Quand on n'a que l'amour)". It is a sense memory in the true meaning of the word.

So here I sit on another Tuesday, pondering life in the Vancouver Public Library and it might as well be the fragrance counter at Shopper's Drugmart with better books....

There is significant data on such scents causing asthma attacks in adults but very little on the non-asthmatic population.
One example of a study in The Annals of Allergy and Immunology in 1995 included 29 asthmatic adults and 13 normal subjects. Histories were obtained and physical examinations performed. Asthma severity was determined by clinical criteria of the National Heart, Lung, and Blood Institute (NHLBI). Each subject was asked to "SNIFF" perfume strips (like the ones from magazines). Symptoms and signs were recorded before and after challenges. Pulmonary function studies were performed before and at 10, 20, and 30 minutes after challenges. Chest tightness and wheezing occurred in 20.7% of asthmatic patients after perfume challenges. Asthmatic exacerbations after perfume challenge occurred in 36%, 17%, and 8% of patients with severe, moderate, and mild asthma, respectively. These correlated to objective testing changes in lung function testings among the asthmatics. There was no such findings in non-asthmatics.

The message here? If you are reading this.... smell yourself. If you can smell your scent... it is probably too much. One spritz, ladies... two at most. That is all. It is time for a "scentual budgetary cut"... consider yourselves on notice. If you are not sure... give me a call... I will come over, smell you and provide instant feedback. Until then.... obey the ever favourable fashionista rule... LESS IS MORE.

As for lessons learned and my trip back to '79... it is good to know I really did have a good set of lungs.... not just for songs but for the rose water Mrs. K was belting my way every Monday, Wednesday and Friday. Eyes watering, heart full.... I really won't regret what I did for love....
Posted by Girlfriend's Guide to Health at 2:36 PM